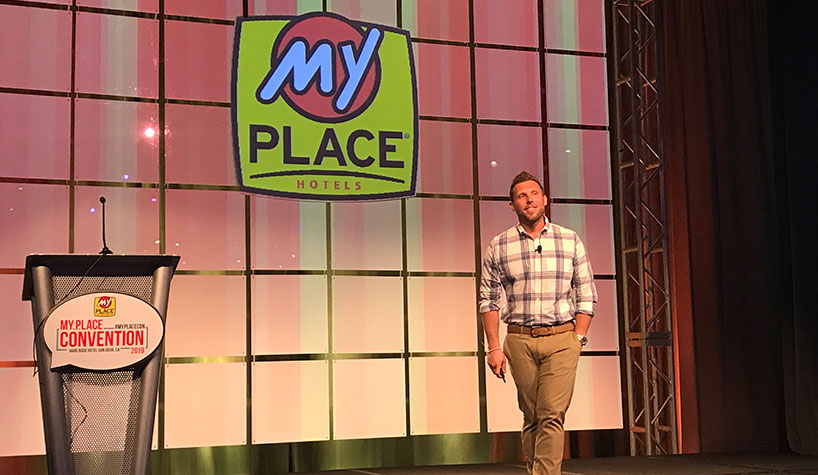 Ryan Rivett, president and CEO of My Place Hotels

SAN DIEGO—Over the past year, My Place Hotels of America LLC has seen increases in RevPAR, occupancy and social media numbers. The economy extended-stay hotel brand is also nearing 50 operating properties and has grown to more than 20 states. My Place’s CEO doesn’t expect a slowdown in growth anytime soon.

“We’re really excited to be able to say that we’ve maintained a consistent aesthetic,” said Ryan Rivett, president/CEO of My Place Hotels, at #MyPlaceCon, held at the Hard Rock Hotel San Diego. “Our customers know what to look for. Our customers know what to expect on the outside, and, of course, they also know—and all of our reviews tell you—what to expect: The inside is just as nice as the outside.”

For the brand, there are currently 16 projects under construction or in pre-construction phases.

The hotel chain can be found in 21 states today. “That’s going to grow a significant amount this year,” Rivett said.

My Place has 45 operating properties. “Forty-six is just days away, and 50 is just within a couple of months, so I’m excited about that milestone—to see 50 properties open and operating, but I know that going from 50 to 100 is going to happen twice as fast as the first few, maybe even more,” he said.

My Place has sold 75 (possibly 76) franchise agreements. The hotel chain is currently working on one.

“Those numbers have increased dramatically since the last time we got together,” he said. “It’s really exciting. Last time, I was able to report that we had 45 franchises sold. Today, we’ve done a lot more than that.”

About a year ago, the franchisor launched My Place Social, designed to enable My Place’s social media team to effectively manage franchisee social media accounts. “We recognized that managing social media effectively means that it takes diligence,” he said. “It takes daily input.”

In the past 12 months, My Place has reached more than 20 million people on social media, engaged with nearly 560,000 users and gained more than 211,000 Facebook followers. During the same time frame, the company saw more than a 300% return on investment on Facebook.

“We’ve tested,” Rivett said. “We’ve worked with so many of you on it. We’ve reached 20 million people in the last 12 months, putting an impression in their mind of what My Place is.”

“On top of that, [there’s a] 32% increase in revenue coming through our brand.com website, myplacehotels.com,” he said. “That represents a big success for us. We’ve been working really hard on how to convert OTA traffic and third-party booking engine traffic to our own booking engine, and what we saw was a corresponding increase in bookings year-over-year through our myplacehotels.com website.”

The company has focused some of its efforts on responding to property reviews. Ninety-five percent of online reviews of My Place properties are answered by the company’s management staff.

“That’s a big statistic,” he said. “That’s something that represents the great relationship we have with guests.”