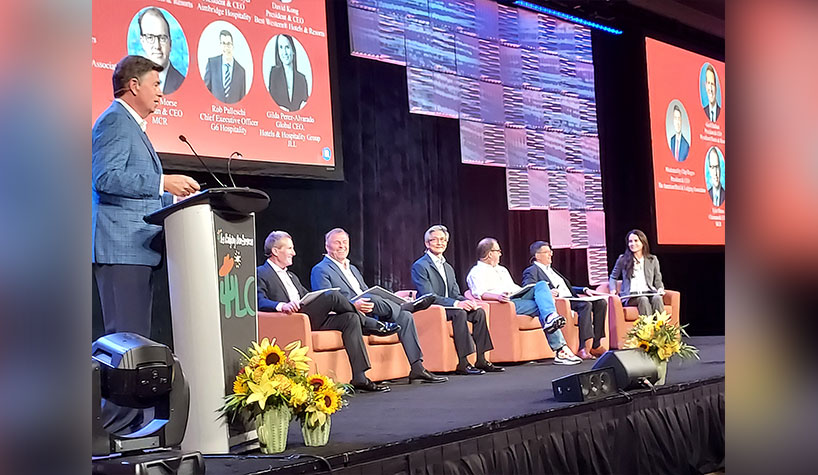 PHOENIX—The hospitality industry gathered at The Lodging Conference at the JW Marriott Desert Ridge Resort here, and the atmosphere was one of positivity as everyone was excited to be together to discuss business and spend time with old friends.

During the opening general session, “A View from the Top,” moderator Chip Rogers, president/CEO, American Hotel and Lodging Association (AHLA), surveyed both the audience and the panel of CEOs on the issues facing the industry.

Here are some takeaways:

Tyler Morse, chairman/CEO, MCR on helping to solve the labor crunch: “There’s a simple solution to this: immigration reform. There are millions of people that want to be in America and a lot along the Southern borders. They want to come here tomorrow. And we could fill a lot of these 10 million positions in a heartbeat…We are killing ourselves from a wage rate perspective rather than opening up the parking gate on the Southern border, and giving people the American dream.”

Gilda Perez-Alvarado, global CEO, Hotels & Hospitality Group, JLL on rising wages impacting value: “What investors are telling us right now is that the P&Ls that they are looking at for 2020/2021 performance is very strong, [but] it’s artificially strong because the hotels are not fully staffed. When they’re doing the underwriting going forward, they are thinking about wage inflation [and] fixed costs going up. It is definitely impacting value. I don’t know that we will go 100% back to the staffing that we used to do—maybe the right model is 75-80% of it. We’re going to have to do more with less, but we are definitely going to see wage inflation going there.”

Michael J. Deitemeyer, president/CEO, Aimbridge Hospitality, on why offering flexible schedules for employees will have help recruit new employees: “We’re working hard to appeal to folks who historically haven’t worked in the space because of rigid structure and times. “We’re finding some level of success with that. It’s training, it’s benefits. We’re rolling out a new plan to our part-time employees trying to appeal to them and once again just bring the other folks into our space.”

David Kong, president/CEO, Best Western Hotels & Resorts, said that the industry must pay competitive wages to recruit and retain talent. “I love the compensation as the price of entry. If you don’t pay people fairly and provide some benefits competitive with whomever you’re competing with for that same talent, you can’t even hold on to people, let alone try to recruit people. So, I look at that as a price of entry and this question is about recruiting people.”

Geoff Ballotti, president/CEO, Wyndham Hotels & Resorts, believes that the industry will reach 2019 numbers again by 2023: “When you think about economy and midscale limited-service hotels…the last two months [there was] 15% revenue growth over 2019 in those economy and 5% in midscale.”

Rob Palleschi, CEO, G6 Hospitality, on promoting career opportunities when recruiting: “If we want people to work in this industry, shouldn’t we all believe that career opportunities are the best here? Shouldn’t we be the biggest proponents of that and be the most energized around that we should be the cheerleaders for this? This is why this is great because we all started this desk clerks and in housekeeping.”