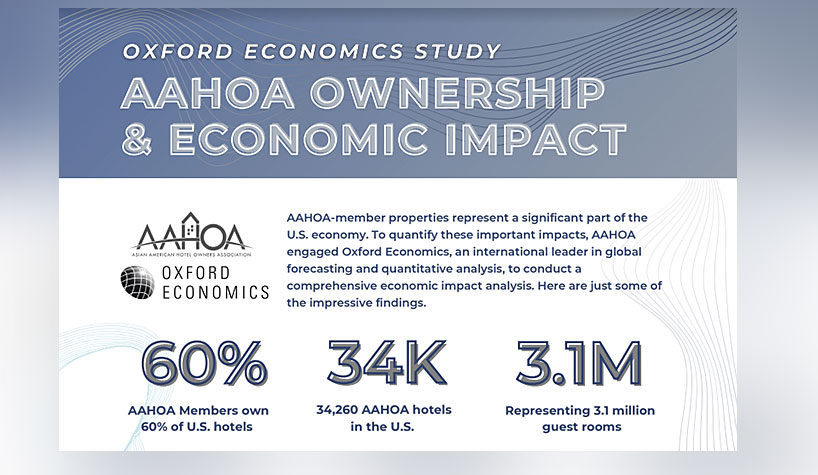 DALLAS—AAHOA revealed the results of a new study conducted in partnership with Oxford Economics, that found that the organization’s members account for 60% of all hotels in the U.S., here at the 2021 AAHOA Convention & Trade Show at the Kay Bailey Hutchison Convention Center Dallas.

The study analyzed the share of U.S. hotels and rooms owned by the association’s nearly 20,000 members, hotel operations, hotel guest ancillary spending, capital investment and indirect and induced impacts supported by AAHOA hotels in other parts of the U.S. economy.

“The findings laid out in this new study are a testament to the strength and influence of AAHOA members and serve as yet another reminder of hotel owners’ vital economic contributions to communities across the nation,” said Ken Greene, interim president/CEO, AAHOA. “Guests at AAHOA hotels spend billions of dollars in local economies. AAHOA members employ as many workers as FedEx and Home Depot—combined—and the 1.1 million employees who work at AAHOA member hotels earn $47 billion annually. AAHOA members are the heart and soul of the hospitality industry and will continue to play an essential role in our nation’s economic recovery.”

The study shows that AAHOA supports a total economic impact of:

“This study gives us the clearest picture to date about the scale, reach, and economic impact that AAHOA members have in the United States,” said Biran Patel, chairman, AAHOA. “It is remarkable how far AAHOA members have come since the association’s founding in 1989 when a small group of hoteliers banded together to fight discrimination. That commitment to helping hoteliers grow their businesses and realize the American Dream is reflected in the impressive numbers revealed today. We are proud of what our members have accomplished and remain committed to being the foremost resource and advocate for America’s hotel owners.”

A comprehensive report will soon be made available on the AAHOA website.