Passpoint is gaining popularity in all areas of travel, and the use cases and discussions are popping up at hospitality events and throughout the industry. But what is it, and how will it benefit hotels and the hospitality industry as a whole?

Passpoint is a protocol developed by the Wi-Fi Alliance (WFA) that allows WiFi-enabled devices to discover and authenticate to WiFi hotspots that provide access to the internet and internal networks.

Here’s a quick snapshot of the primary functionality:

Passpoint is designed to operate in the same manner as cellular in that it provides seamless roaming between different carriers, while at the same time providing the user with a secure connection. There are a few differences though. Here’s what you should know:

Now that we covered how it works, what is the current availability of Passpoint? 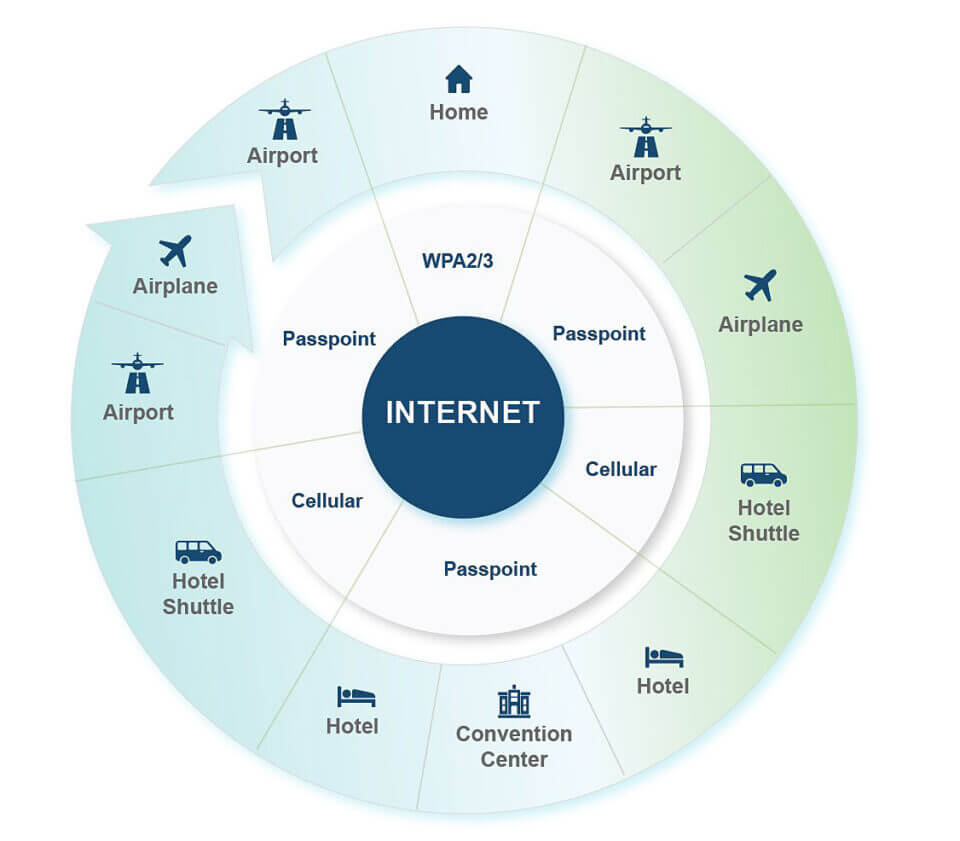 Passpoint and the travel journey
Today, connectivity to the internet is a given for most people. Studies show that in many cases, a guest would not stay at a hotel that did not have a reliable WiFi experience. In addition, many travel-related businesses require the use of secure WiFi to access their business applications. The figure above depicts a typical traveling guest journey where the outer ring illustrates the guest location, and the middle ring shows the possible internet connectivity mechanisms.

Let’s explore a travel use case when Passpoint is deployed at each stage of the traveler’s journey:

Home: Most people have WiFi connectivity in their homes. Secure connectivity can be provided either by WiFi Protected Access 2/3 (WPA 2/3) or Passpoint. Support for Passpoint is provided by many of the current internet service providers.

Airport: Many airports, including London Heathrow, Newark Liberty and Eurico de Aguiar Salles, already provide support for Passpoint via partnerships, which allows the traveler to seamlessly connect to the internet via their preconfigured Passpoint device every time they step into that location.

Airplane: Connection doesn’t have to be lost getting into the air. Major airlines, such as Delta, have partnerships with hotel chains or car rental companies that also support Passpoint in their locations. Once again, travelers can seamlessly connect to WiFi during their flight.

Hotel shuttle: If a property is providing guests access to the hotel shuttle, internet connectivity would most likely be provided by a guest using their cellular device. However, if the hotel has deployed 5G with multi-access edge computing (MEC), then the guest may have access to the hotel’s WiFi Passpoint-enabled network while en route. This means guests could remotely access the services that are available to them at that hotel. Food ordering or booking spa appointments after a long day of travel come to mind?

Hotel: If the hotel has deployed a Passpoint-enabled WiFi network, then once the guest arrives at the hotel, the guest would automatically be connected to the hotel WiFi network with no login required. In addition, once a guest steps into any of the other affiliated or partnered venues (e.g., restaurants, coffee shops, gift shop) at or near the hotel, he or she would be able to seamlessly connect to the WiFi in these venues as well. Hyatt, for example, is implementing Passpoint at their properties worldwide. This means, any time a guest steps into any Hyatt property, they will be instantly and securely connected.

While the above example requires that all venues visited during the journey enable the deployment of Passpoint, it demonstrates how transformational this technology already is and can be for hotels. People are getting used to 24/7 connectivity, and there is a huge opportunity to change the experience for hotel guests. Not only is Passpoint easy and secure, it also allows for true personalization, upsell/advertising and numerous other benefits that can be realized once the technology is in place.

Web Exclusive: Houston hotel adds new air-cleaning tech by Gregg Wallis Unfortunately, the COVID-19 virus is still with us, and with new strains of the virus proving…
HB Exclusive: Industry leaders tackle uncertainty, brands and the recovery of… by Hotel Business DALLAS—Leaders from the hotel franchise and technology communities met on the eve of the AAHOACON21 conference…
Web Exclusive: Lybra CEO on big data's role in revenue management by Adam Perkowsky Big data is a term that has been used by analysts in this industry and many…
Web Exclusive: GenEon offers non-toxic, sustainable cleaning solutions by Abby Elyssa GenEon Technologies, a sustainable and toxic-free cleaning, sanitizing and disinfecting solutions company, recently received EPA List…