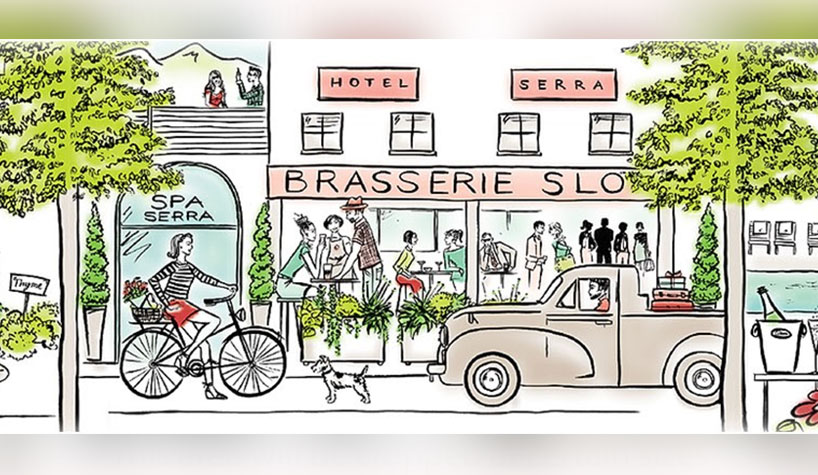 NATIONAL REPORT—New construction projects abound in the U.S., including the first full-service luxury hotel to be built in San Luis Obispo, CA; a dual-brand AC and Moxy in midtown Atlanta; and more.

Blending urban sophistication with the city’s historic roots, Hotel Serra incorporates two vintage brick storefronts as an intrinsic part of the hotel’s main facade. The first full-service luxury hotel to be built in San Luis Obispo, CA, it is scheduled to open early 2019.

Airy and welcoming, Hotel Serra’s 65 guestrooms and suites are designed with clean lines and natural materials. Rooms range from 350 sq. ft. to suites as large as 920 sq. ft. The roomy residential-style penthouse loft has a double-sided fireplace between a separate bedroom and living room, a powder room and bathroom with a deep soaking tub, dining area that seats eight, wet bar and audio-visual capabilities for small meetings.

Designed and built with LEED Silver specifications in mind, the property’s decor reflects a synthesis of three periods that merge a modern aesthetic and 19th century industrial influences with a whisper of Mission style, according to the company.

Winter Construction has topped out the 11-story AC Hotel and Moxy Hotel in midtown Atlanta. The dual-branded hotel by Marriott includes the Moxy, debuting in Georgia and designed for millennials, and the AC Hotel, Marriott’s European-inspired hotel.

Winter celebrated the topping out, a construction milestone observed when the structure has been constructed up through the roof or highest level, with lunch for more than 300 guests, mostly subcontractors who have been instrumental in the project’s progress to date.

Situated between 13th and 14th St., the two hotels have distinct entrances and separate elevators and floors, with a shared common floor that includes a pool, fitness center, bar and business center. The Moxy will include 155 rooms, and the AC Hotel will include 133 rooms. The building’s total area will be 266,000 sq. ft., including four levels of parking.

In addition to the AC and Moxy, Winter is also currently building a boutique hotel in Savannah, GA, at the edge of the historic River St., overlooking the Savannah River.

Kiawah Island Golf Resort has launched a series of major projects, such as breaking ground on the first stage of redevelopment, which will continue through the end of 2020 in time to host the PGA Championship in May 2021.

The projects consist of the following:

“These developments mark an exciting chapter in Kiawah Island Golf Resort’s notable history,” said Kiawah Island Golf Resort President Roger Warren. “The developments will completely revitalize the West Beach area, which formed the nucleus of the resort when it was first developed in 1976, but it will also enhance and complement the world-class facilities, amenities and programs that Kiawah has been proud to offer its guests over the past decades.”

The West Beach Village buildings and The Ocean Course Cottages are designed by Robert A.M. Stern Architects of New York. The Sanctuary Chapel and Night Heron Park projects are designed by architectural firms SMHa of Mount Pleasant, SC. Interior design is by Kent Interior Design of Atlanta. The general contractor is Choate Construction Company, managed from its Charleston offices.

The projects will break ground this spring and summer, with projected completion dates ranging from fall 2018 to winter 2020.