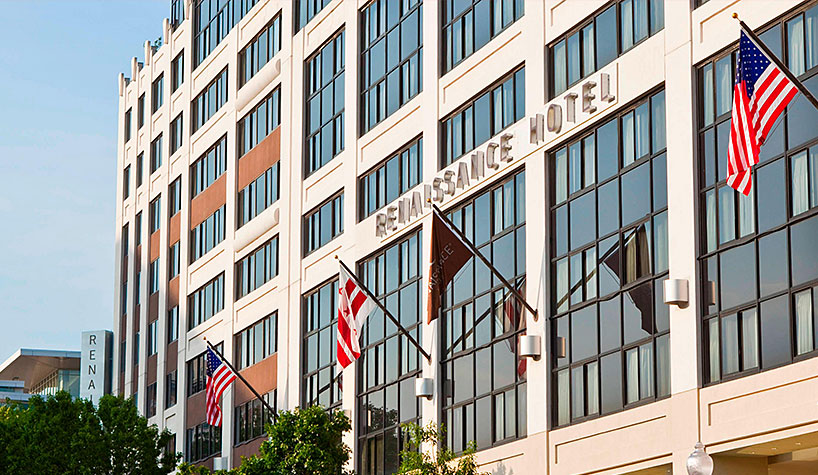 Sunstone completed the project at the Renaissance Washington DC during the third quarter.

NATIONAL REPORT—Four hospitality companies have posted their results for the third quarter ended Sept. 30. They are:

The company experienced slow but steady improvements in hotel demand during the third quarter, most significantly in leisure travel, which benefited its hotels in drive-to leisure markets and certain urban markets. At this point, a majority of its group business for 2020 has cancelled. Of the group business that has cancelled to date, approximately 23% has rebooked into future periods. The extent of the effects of the pandemic on the company’s business and the hotel industry at large, however, will ultimately depend on future developments, including, but not limited to, the duration and severity of the pandemic; the development, distribution and administration of a successful vaccine or therapy; the length of time it takes for demand and pricing to return; and normal economic and operating conditions to resume.

During the quarter, Sunstone completed its previously disclosed projects at the Renaissance Orlando at SeaWorld, the Renaissance Washington DC and The Bidwell Marriott Portland, all while adhering to the relevant government regulations and social distancing mandates aimed at both protecting those involved in the construction work and stemming the spread of COVID-19. The company invested $11.2 million and $44.0 million into its portfolio during the third quarter and first nine months of 2020, respectively.

Net loss for the quarter was $79.6 million and loss per diluted share was 40 cents. Comparable total revenues decreased 79.2% from the comparable period of 2019. Hotel adjusted EBITDA was -$17.4 million, a 42.8% improvement from the second quarter 2020. The company’s liquidity increased during the quarter by $70.6 million to $434.5 million, comprising $110.6 million of unrestricted corporate cash, $23.9 million of unrestricted cash at its hotels and $300.0 million of capacity on its revolving credit facility.

DiamondRock initially suspended operations at 20 of its 30 previously operating hotels throughout March and early April either under governmental orders or due to lack of travel demand caused by the pandemic. It reopened 12 hotels during the second quarter and five additional hotels during the third quarter as governmental orders were modified or lifted and leisure demand began to return. The company currently has 27 of its 30 operating hotels open.

All of the company’s hotels are open with enhanced health and sanitation measures in place. It continues to intentionally consolidate operations at five hotels, down from 38 hotels as of May, in market clusters to maximize operational efficiencies. Occupancy and RevPAR for the company’s portfolio have sequentially improved since April, with average occupancy reaching approximately 52% for September and approximately 53% for October, driven by a wide variety of demand generators including leisure, government, healthcare, construction, disaster recovery, insurance, athletics, education and local and regional business-related travel.

The company has an outstanding contract, which was entered into prior to 2020, for the purchase of a 176-room Hilton Garden Inn in Madison, WI, for a total expected purchase price of approximately $50 million. The hotel is currently under development, and the company anticipates acquiring the hotel within the next six months from Sept. 30. There are many conditions to closing under the contract that have not yet been satisfied, including completion of construction, and there can be no assurance that a closing on the hotel will occur. If the seller meets all of the conditions to closing, the company is obligated to specifically perform under the contract.

Park Hotels & Resorts Inc.
Park Hotels & Resorts recorded pro-forma RevPAR of $26.14, a decrease of 86.1% from the same period in 2019, which was an improvement from a 95.9% year-over-year decline reported last quarter. Occupancy for Park’s 33 consolidated hotels open during the entirety of the third quarter was 36.4%, while ADR was $137.10.