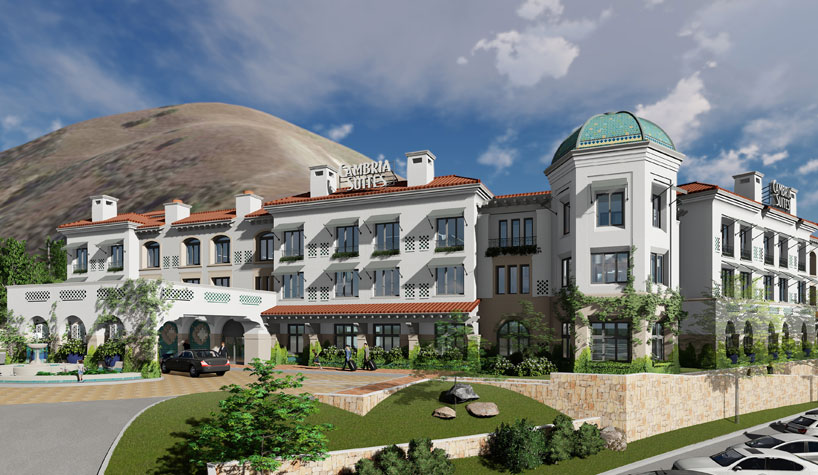 Financing Secured for Construction of Cambria Hotel in California
Sonnenblick-Eichner Company has arranged $29 million in construction financing for the Cambria Hotel Calabasas, a 125-room, select-service hotel to be located on Las Virgenes Rd., one block south of U.S. Highway 101/Ventura Freeway in Calabasas, CA. Amenities at the hotel will include meeting space, indoor/outdoor dining and a lobby bar, an outdoor pool, a business and fitness center, and surface parking for approximately 150 cars. The loan provided funding in excess of 65% of total project costs and was provided by an international commercial bank.

CHC Arranges $6.1M Refi for Hampton Inn in Georgia
CHC has arranged $6.1 million for the refinance of the Hampton Inn Milledgeville. The loan was placed with a national lender and offered a 10-year term and 30-year amortization at a fixed interest rate.

The 75-key property was purchased by the sponsor in 2015, and realized strong performance gains under new management with the completion of a PIP. This was impacted when new supply opened in the market in 2017, but the property had recently stabilized. Although Milledgeville (population 18,575 in 2017) is a small market, the financing allowed the sponsor to return nearly all of its equity, and secure an attractive interest rate on a non-recourse basis.

Knighthead Provides $37.75M Loan for Hotel Conversion in Massachusetts
Knighthead Funding has originated a $37.75-million loan for the completion of an upscale, independent 67-room hotel in Cambridge, MA. With Knighthead Funding’s 24-month financing, the sponsor, a local partnership operating as Sean Casey LLC, will complete the transformation of a four-story multifamily building into a 67-room boutique hotel that will include ground-floor retail, restaurant and the addition of a 10,000-sq.-ft. fifth floor penthouse with a rooftop lounge. The new hotel, expected to open in the first quarter of 2020, will be managed by Hay Creek Hotels, which operates 19 boutique hotels across the country.

Finance Deals Heat Up Hospitality INTERNATIONAL REPORT—What’s happening in finance across the industry? Here’s the details on the recent transactions taking…
A Look at Five Finance Deals NATIONAL REPORT—Transactions are taking place across hospitality. Madison Realty Capital, The Bluestone Group, Hospitality Funding, Berkadia,…
Brand Finance: Hilton remains world’s most valuable brand The total value of the top 50 most valuable hotel brands has decreased 33% year-on-year, down…
A Look at Recent Finance Deals NATIONAL REPORT—Finance activity is heating up across hospitality. Here are the details on the recent transactions…