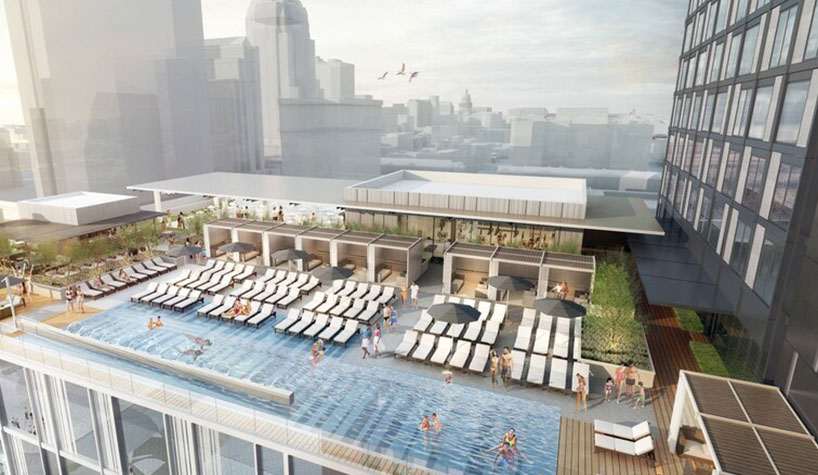 Rendering of the Austin Marriott Downtown.

NATIONAL REPORT—Hospitality developments are underway across the country. The Austin Marriott Downtown topped off its project, and there’s more.

In place of raising the final beam, the Austin Marriott Downtown raised three Garrison Brothers bourbon barrels via crane on the hotel’s rooftop to commemorate structural completion. Just like bourbon takes on the characteristics of the barrel and its environment, the Austin Marriott Downtown is taking on the spirit of Austin and the surrounding neighborhood in its final construction stages, according to the company. The barrels will remain on the roof throughout the duration of the construction period until opening in mid-2020, at which time the hotel’s first guests will be treated to an exclusive Austin Marriott-inspired whiskey tasting.

Austin Marriott Downtown will have 613 guestrooms, including 25 suites, a rooftop pool and rooftop bar concept with views, three bars and two locally inspired restaurant concepts on the ground level. The hotel will also offer more than 60,000 sq. ft. of meeting space with an exhibit hall with floor-to-ceiling windows along a 170-ft. glass wall.

The Aloft, expected to open in spring 2020, is owned in partnership with Easton owners L Brands and the Georgetown Company. The Marriott-flagged Aloft brand operated 121 properties as of this past summer.

Based in New York City, the company has long been active in central Ohio. Along with three existing hotel properties at Easton, it owns and manages the Greene Town Center mixed-use development in Dayton, OH’s Beavercreek suburb.

Chattanooga, TN-based Vision Hospitality Group Inc. has revealed the Hampton Inn & Suites by Hilton in downtown Huntsville Alabama has broken ground. The 150-room hotel marks Vision’s entrance into the Huntsville, AL market and is slated to open in early 2021.

The hotel is located adjacent to the Von Braun Center, which situates the hotel within walking distance to a variety of eclectic boutiques and restaurants and only a short drive to the city’s breweries and craft coffee shops.

NAI Realvest recently closed on the $825,000 sale of 2.7 acres at County Road 229 and State Road 44 just east of the I-75 Interchange in Wildwood, FL. MPH Hotels Inc., helmed by Michael P. Holtz, a hotel developer/operator based in St. Petersburg, FL, purchased the property to build a 92-room Holiday Inn Express that will break ground in mid to late October.

Kevin O’Connor and Matt Cichocki, principals of NAI Realvest, brokered the transaction on behalf of the buyer and the Winter Park, FL-based seller 2511 Howell LLC, whose principal is a local investor/owner of several businesses. The Wildwood hotel is scheduled to open December 1, 2020.