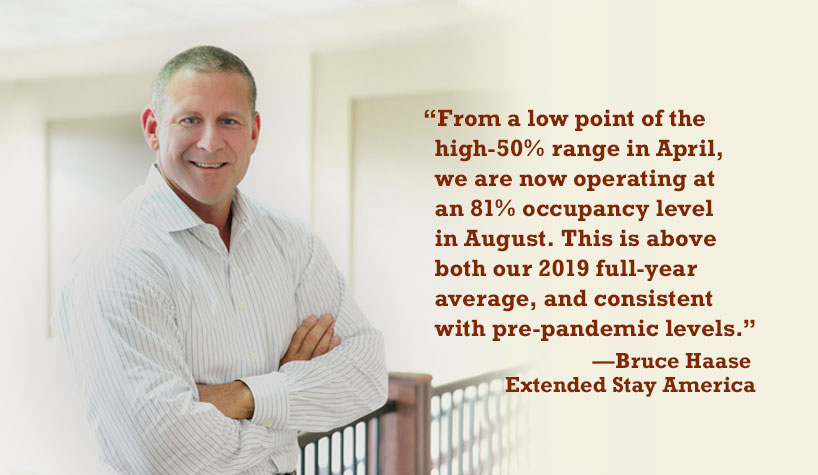 “Our second quarter results clearly demonstrate that Extended Stay America and our business model is far different from the transient lodging brands,” said Bruce Haase, president/CEO, Extended Stay America. “During the second quarter, our comparable systemwide RevPAR declined by 28.7% and that compares to industry declines of 70% and declines of 50% for other mid-price extended-stay hotel brands. In fact, we beat every benchmark in the industry by a large amount in the second quarter. Our performance exceeded the overall industry, competitive mid-price extended-stay hotels, our competitive set, as well the economy and midscale chain scales. Our RevPAR index increased by over 4,600 basis points to 141 in the second quarter.”

The company also saw relatively good occupancy levels. “Today, our company occupancy levels are the envy of the industry,” he said. “Our systemwide occupancy has increased since mid-April. From a low point of the high-50% range in April, we are now operating at an 81% occupancy level in August. This is above our 2019 full-year average and consistent with pre-pandemic levels. We believe that our occupancy is currently the highest of any publicly reporting brand in the U.S. today, including significantly more residential economy extended-stay hotel brands.”

As of June 30, 2020, the company had a pipeline of 69 hotels representing approximately 8,400 rooms. Three company-owned hotels and one franchised hotel opened during the second quarter.