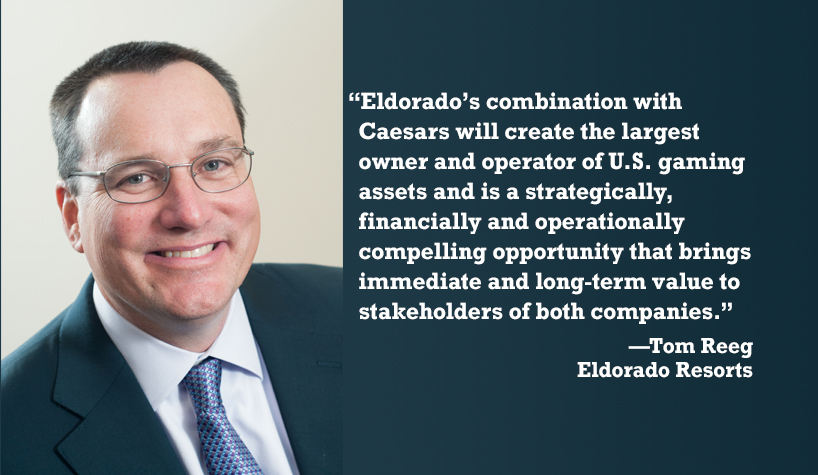 LAS VEGAS—Eldorado Resorts Inc. and Caesars Entertainment Corporation have entered into a definitive merger agreement to create the largest U.S. gaming company. Eldorado is acquiring Caesars for $17.3 billion in the deal.

A report in March said that the companies were exploring a merger.

“Eldorado’s combination with Caesars will create the largest owner and operator of U.S. gaming assets and is a strategically, financially and operationally compelling opportunity that brings immediate and long-term value to stakeholders of both companies,” said Tom Reeg, CEO of Eldorado. “Together, we will have an extremely powerful suite of iconic gaming and entertainment brands, as well as valuable strategic alliances with industry leaders in sports betting and online gaming. The combined entity will serve customers in essentially every major U.S. gaming market and will marry best-of-breed practices from both entities to ensure high levels of customer satisfaction and significant shareholder returns.”

Tony Rodio, CEO of Caesars, added, “We believe this combination will build on the accomplishments and best-in-class operating practices of both companies. I’m familiar with Eldorado and its management team, having worked with them on a previous transaction, and I look forward to collaborating with them to bring our companies together. We are excited to integrate Caesars Rewards with the combined portfolio. The incorporation of Caesars Rewards has produced strong results at the recently acquired Centaur properties. By joining forces, we believe the new Caesars will be well-positioned to compete in our dynamic industry.”

The proposed transaction will combine two leading gaming companies under the Caesars name, with complementary national operating platforms, strong brands, strategic industry alliances and a collective commitment to enhancing guest service and shareholder value, according to the companies. The combined company will provide its guests with access to approximately 60 domestic casino resorts and gaming facilities across 16 states.

In the proposed transaction, Eldorado will acquire all of the outstanding shares of Caesars for a total value of $12.75 per share, consisting of $8.40 per share in cash consideration and 0.0899 shares of Eldorado common stock for each Caesars share of common stock based on Eldorado’s 30-calendar day volume weighted average price per share as of May 23, 2019, reflecting total consideration of approximately $17.3 billion, composed of $7.2 billion in cash, approximately 77 million Eldorado common shares and the assumption of Caesars outstanding net debt (excluding face value of the existing convertible note).

In addition, VICI Properties Inc. and Eldorado have entered into a master transaction agreement in connection with the acquisition of the real estate of three assets and amendment of existing leases and right of first refusals.

VICI will acquire the real estate associated with Harrah’s Resort Atlantic City, Harrah’s Laughlin Hotel & Casino and Harrah’s New Orleans Hotel & Casino for approximately $1.8 billion. The properties will be added to an existing master lease and will have an initial annual rent of approximately $154 million. The proceeds from this transaction represent a rent multiple of 11.75x.

“VICI is honored and excited to be integrally involved with Eldorado in this transformative transaction,” said Ed Pitoniak, CEO of VICI. “As a REIT, we seek to partner with operators who have the most powerful, valuable and enduring relationships with the end users of our real estate. Under Tom Reeg’s leadership and frontline focus, the combination of Eldorado and Caesars will yield the most compelling guest experiences and network effect in American gaming.”