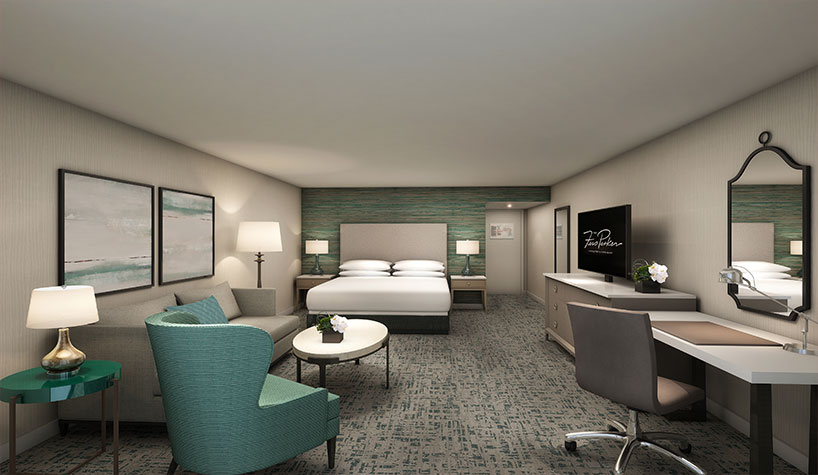 California's Fess Parker Resort is getting new rooms, a reflag and more as part of a revamp.

NATIONAL REPORT—With the industry still enjoying profitability, hoteliers are taking advantage of the current economic environment to enhance and upgrade their properties. Here are few renovations to know about.

The Fess Parker Resort in Santa Barbara, CA, currently a DoubleTree by Hilton, is undergoing a complete renovation that will transform it into the Hilton Santa Barbara Beachfront Resort in May.

Originally built in 1986, the property will remain managed by Hilton and jointly owned by lodging REIT Park Hotels & Resorts along with the children of iconic Western film and television star Fess Parker.

The revitalization project includes a refurbishment of the guestrooms, lobby, Roundhouse Restaurant and Java Del Mar, the resort’s grab-and-go coffee bar. The guestroom renovation is advancing one building at a time, with the rest of the resort’s lodging options remaining open to guests.

In addition, the resort’s meeting space, including two ballrooms, the ballrooms’ foyers, numerous meeting rooms and public restrooms are being renovated.

The Hilton Miami Downtown has completed a $35-million property-wide renovation.

Located on the site of the former Omni International Mall, the property was reimagined by HBA (Hirsch Bedner Associates) Atlanta, which incorporated an urban aesthetic with an emphasis on technology, contemporary fashion and art influences.

All 527 guestrooms and suites were revamped as was the more than 45,000 sq. ft. of meeting space that includes 19 meeting rooms and one of Downtown Miami’s largest ballrooms (17,000 sq. ft.).

Also renovated and redesigned was the hotel’s breakfast, lunch and dinner restaurant, Brisa Bistro. On the Club Level, the lounge features a new look.

Later this year, a multimillion-dollar upgrade to the property’s rooftop pool deck, outdoor bar and grill, CityVu, and the hotel’s 1601 Lounge will be realized.

In Napa, CA, the River Terrace Inn has completed a $5-million expansion and renovation that included the porte cochere, lobby and front desk, hallways, ALBA restaurant, as well as an expansion of the guestrooms, ALBA’s kitchen, meeting and event spaces and fitness center.

The property added six riverfront guestrooms and two suites that feature a fireplace, patio and separate shower and jetted bathtubs.

In addition, the outdoor pool was removed and an outdoor event space was introduced. A new 1,400-sq.-ft. ballroom opening out onto the Napa River also was added.

The outdoor terrace at the ALBA restaurant was remodeled to include a new full bar and outdoor fire pits, and the kitchen was expanded.

The porte cochere and lobby were remodeled, including removing the front desk and replacing it with individual pods. Hallways were updated with new carpeting and paint, and the fitness center was relocated, expanded and outfitted with new equipment.