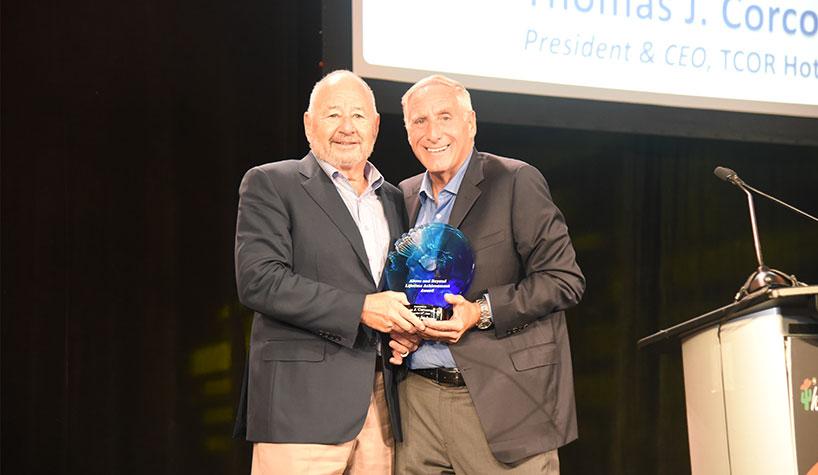 The Lodging Conference honors Tom Corcoran with Above and Beyond Lifetime Achievement Award.

PHOENIX—Thomas J. Corcoran Jr., president/CEO of TCOR Hotel Partners, has received the 2019 Above and Beyond Lifetime Achievement Award. The award was presented at The Lodging Conference on Sept. 24, here in Phoenix.

The Above and Beyond Lifetime Achievement Award recognizes an individual who has provided outstanding, life-long contributions to the hospitality industry. Corcoran is an experienced professional in the U.S. lodging industry, with 40 years as a senior hospitality executive. Corcoran is renowned as a founder/senior executive of FelCor Inc., a publicly-traded real estate investment trust focused exclusively on hotels.

“The award from the Lodging Conference is unique because of the broad section of industry participation that usually falls during the end of the third quarter,” Corcoran told Hotel Business. “Usually people are thinking about how the current year has been and look to putting together their budgets for the following year. The conference is unique because of the people who attend.”

Corcoran served as CEO of FelCor from its founding in 1991 until beginning his tenure as non-executive chairman of the board in 2006. He served as chairman of FelCor until its merger with RLJ Lodging Trust in 2017—at the time of the merger, FelCor owned a diversified portfolio of 39 hotels in major markets throughout the U.S. and had an enterprise value of approximately $2.6 billion.

“I appreciate being recognized for my 50 plus years in the industry as a hotel person starting as a dishwasher to ownership along with participation as a past chairman of the AHLA and also IHG Owners Association. I would like to think the recognition is because of my hotel experience along with giving back to the industry through my involvement in the associations,” he said.

Corcoran is currently serving as chairman of the board of Sammons Enterprises, a global holding company operating within a diversity of industries (including real estate) and a privately-owned company, with more than $97 billion in assets and more than $6 billion in annual revenue. He has served as a board member since 2010.

“Harry Javer knows how to put on a great conference that appeals to a broad section of the industry,” Corcoran said. “Phoenix is a great location for the conference and has lasted and will continue to last because people want to be at the conference. There are great general and breakout sessions and the social activities because it’s Phoenix, and outdoors are the best of any of the industry conferences.”