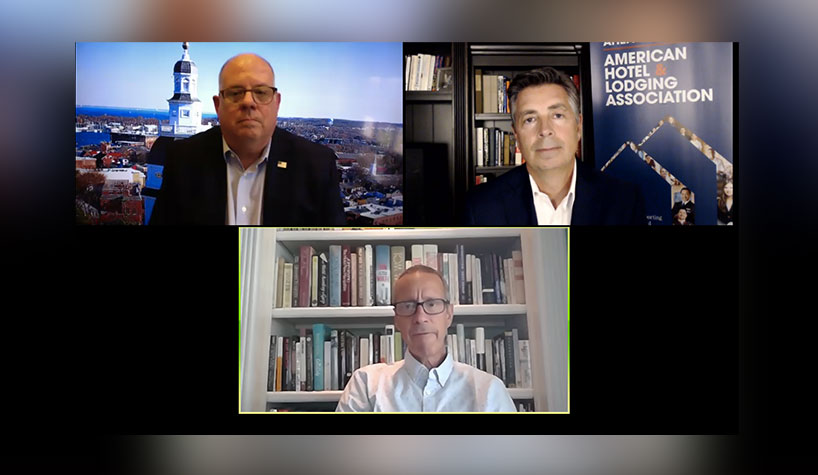 In introducing the series, Rogers noted, “This is clearly a historic time, not just in our nation, but really around the world… Over the last five or six months, the entire world has been impacted by this global pandemic. Here in the United States, we’ve never seen anything like this before where the entire economy got shut down all at once. At some point, about six weeks ago, we had 95% of all Americans under a shelter-in-place order. That has never happened before. When you take that and layer on top of it tens of millions of job losses, the economic uncertainty that comes with that, schools being closed now, summer activities being canceled for the most part, and the social unrest and racial tension that is happening in our country, never before have we seen a time like this in America and never before have we seen a time like this where we need leadership.”

Responding to a question about when recovery will happen, Sorenson noted, “I think if your question means full recovery, when are we back to the RevPAR levels we were at in 2019, nobody knows the answer to that, but it’s likely to be a number of years. We’re likely to require the kind of confidence in the safety of travel which really can only be had when the sense of COVID-19 is that it is behind us.”

However, he noted, the recovery has begun. “I think it would be far, far, far too optimistic to think that recovery from something like this is like flipping a switch, that suddenly we will be back to the [former] levels of employment or economic performance or RevPAR—it’s going to take some time to get back there because the impact of this has been so incredibly profound,” he said.

Sorenson noted that there will be complications on the operations side. “You think about all of these small businesses, including hotels, that have furloughed or laid off their team,” he said. “Many of them will want to go back to those teams and bring them right back, but are they still available to come back? Are they still in the same location or are they someplace else? Have they taken different work because there are parts of the economy that are stronger? Just to work through that bit is going to be complicated.”

However, he does see positive signs as well. “I think it’s quite clear that the recovery is underway in the sense that you look at the American traveler today, we may not be traveling for work, we may not be getting back to the big conventions yet, but as we are permitted in the states we live to go and start to travel, to go see family, to go to the beach, to go someplace where we can go hiking, we are interested in doing that and we’re doing it fairly quickly,” he said.

The recovery will mostly depend on consumer confidence. “We have to continue these downward numbers on the health side, and we’ve got to continue to improve the economic numbers,” Hogan said. “Our unemployment numbers are going down, more and more of our economy is starting to come back online, but it’s not really about what restrictions the government places on businesses at this point because, for example, in our state, there are very few restrictions left. We’ve lifted the stay-at-home order, we have nearly all of our businesses open and functioning, and the hotel industry, other than size limitations on crowds for conventions, never was shut down. It’s just people were not going… Until people feel comfortable getting back to normal, we’re not going to have true recovery… It’s not going to be an easy thing, but it’s going to be more about consumer confidence: When do you feel comfortable getting on a plane or a cruise ship, going to a hotel or a convention, or going into a restaurant? About 68% of people in a recent survey said they don’t feel comfortable going into a restaurant. It’s not about restrictions; it’s about people’s comfort level… When people feel safe from the virus is when the economy can really start to grow, but it’s going to take awhile.”

Sorenson noted that the comfort level will also dictate where people choose to travel. “Take New York as an example: New York has been an epicenter of COVID-19 for the last few months; it will not be the first place where leisure travelers decide to go back because it has a flavor of concentration of people. It has a flavor of ‘Maybe I’m going to a place which presents more risk.’ But if, by comparison, I can go to the beaches of Maryland, and I can be on the sand, I can be outside with the wind blowing, that is a better environment,” he said. “If I’m in Florida and I’m seeing a resurge of the virus in Miami, it’s going to cause some number of folks who are thinking of going to Miami not to go to Miami. They either stay home or go someplace else.”

He also pointed to the divide among those who are cautious and those who aren’t. “[Take] mask wearing, as an example. This issue has gotten far too politicized, which is a tragedy because mask wearing is a significant part of how we earn that confidence from the consumer,” Sorenson said. “It’s complicated from a government perspective because what are you permitted to actually require in a country like the United States where you’ve got a strong sense of personal liberty, but it’s also complicated from a business perspective. When you’ve got a hotel full of guests, on the beach on Memorial Day weekend you’re going to have a percentage of those guests who want everyone wearing masks, no one near them, the ability to walk in a bubble and be reasonably protected, and you’re going to have a percentage of guests who say, ‘I’m not worried about this and I’m living my life. I want to be at the beach and go to the bar and I don’t ever want to put a mask on.’ How do we navigate through that? What we are seeing, not just the hotel business, but the airlines and restaurants wrestle with [it too], what role is it of theirs to police, what role of it is it for government to police this sort of behavior. There will be an occasional tiff between Group A and Group B, but more often than not, the folks from Group A, they’re just not coming out again. If they feel like the other guests of that hotel are exposing them to an unhealthy environment, they’re not going to get in a fight with somebody, but they’re going to go home and say, ‘I’m not ready yet to travel because what I’m experiencing is not thoughtful enough.’ I’ve encouraged Governor Hogan in the Maryland context, but I think it’s something for the industry to do as well, where we have influence over this, to make sure that we are leading toward the most cautious set of rules on cleanliness and mask wearing.”

Hogan stressed that this caution will help aid the recovery. “What we’re finding, just recently, most of the deaths and ICU beds have been all people over 70, most in their 80s. But the highest infection rate right now is among twentysomethings because they’re all congregating, hanging out at the bar or the beach, and they’re not wearing masks, they’re not distancing, and they’re all infected,” he said, adding that “60-70% are asymptomatic, but they’re spreading the virus like crazy. So, when they come home to mom and dad or grandma and grandpa, or they go back to work or school, we’re going to have a serious problem to deal with because of them not taking it seriously.”

Ultimately, navigating through this crisis will take strong leadership.

“Typically, when you’re in government or business, you have a problem, you have a challenge, you have an opportunity to look at all the facts, facts which are usually well known, gather your advisors, make tough decisions, and you have a time period to do that and do it right,” Rogers said. “But now we’re faced with facts that seem to change on an almost daily basis, situations that certainly change and decisions that can’t wait for weeks or months, but oftentimes, have to be made in hours.”

Hogan noted, “Communication and sharing information is critically important when things are happening so quickly. You want to be as open and transparent as you can.”

Sorenson agreed. “We will survive this and with it we’ll learn something about the experiences we’ve collected here, which will make us smarter…for the next set of decisions that we’ve got to make,” he said, adding that this experience has been a reminder of something we already knew: “In leadership, a huge part is being transparent, which is a fancy word for telling the truth. And when the decision is complicated, admit that it’s complicated and reveal something about the way the decision is being made so that people understand.”