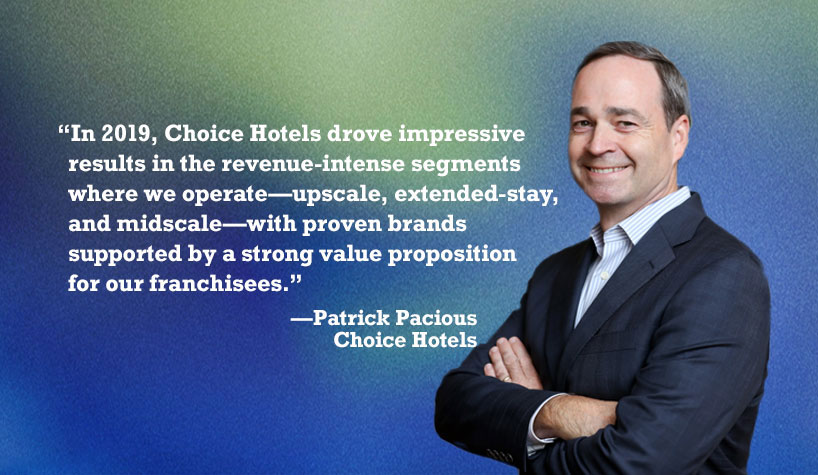 “In 2019, Choice Hotels drove impressive results in the revenue-intense segments where we operate—upscale, extended-stay and midscale—with proven brands supported by a strong value proposition for our franchisees,” said Patrick Pacious, president/CEO, Choice Hotels. “Growth in these higher-value segments, the continued expansion of our platform business through key partnerships, new technology and other key franchisee resources have enabled us to drive our top-line revenue and deliver tangible, value-added solutions to our hotel owners and customers. Our results are a testament to the success of our long-term growth strategy to invest in brands built for the customer of tomorrow.”

The company’s domestic upscale, midscale and extended-stay segments reported a 3.1% aggregate increase in units and a 4.3% growth in rooms since Dec. 31, 2018.

Additionally, during 2019, the company continued to strengthen its presence in the higher growth and more revenue intense upscale, midscale and extended-stay chain scale segments.

The company reported a record 11 Cambria hotels opened in key markets and grew the number of rooms by 28%; the brand reached a milestone of 50 open hotels with 27 additional hotels under active construction as of year-end 2019.

Upscale brands Cambria Hotels and the Ascend Hotel Collection expanded the number of domestic rooms to more than 29,000 for full-year 2019, representing a 44% increase from the prior year and inclusive of 17 properties associated with the company’s strategic partnership with AMResorts, an Apple Leisure Group brand known for its portfolio of luxury, all-inclusive resorts.

The extended-stay portfolio surpassed 400 domestic hotels at year-end 2019, a 10% increase since Dec. 31, 2018. The company also increased its extended-stay domestic pipeline by 13% to 315 hotels over the same period. The WoodSpring Suites brand continued its expansion, achieving more than 8% growth in the number of domestic hotels open and a 23% increase in the domestic pipeline of hotels awaiting conversion, under construction, or approved for development. In January 2020, the company further strengthened its extended-stay presence by introducing Everhome Suites, an all-new construction midscale brand in the extended-stay segment, with multiple developers having already committed to build 13 Everhome Suites hotels.

The company opened an average of more than one Comfort hotel per week in 2019, the highest number of Comfort openings in eight years. The brand’s domestic pipeline reached 290 hotels, approximately 80% of which are new-construction. The brand’s domestic franchise agreements awarded for the full year increased by 20% from the prior year and are expected to generate higher revenues throughout the life of contracts, compared to the domestic franchise agreements awarded in 2018.

Domestic systemwide RevPAR decreased 0.9% and 2.1% for full year and the fourth quarter 2019, respectively, compared to the same periods of the prior year. In the fourth quarter, Comfort hotels that completed renovations experienced the third consecutive quarter of RevPAR share gains versus their local competition.

The company awarded 307 domestic franchise agreements in the fourth quarter of 2019, a 7% increase compared to the same period of the prior year. New domestic franchise agreements for the company’s upscale brands totaled 94 for full year 2019, a 27% increase from 2018, 43 of which were awarded in the fourth quarter, a 30% increase from the same period of 2018. Additionally, the Ascend Hotel Collection executed 151 global contracts in 2019, the largest number in the brand’s history.

The company’s total international pipeline of hotels awaiting conversion, under construction, or approved for development totaled 83 as of Dec. 31, 2019, a 48% increase from Dec. 31, 2018.