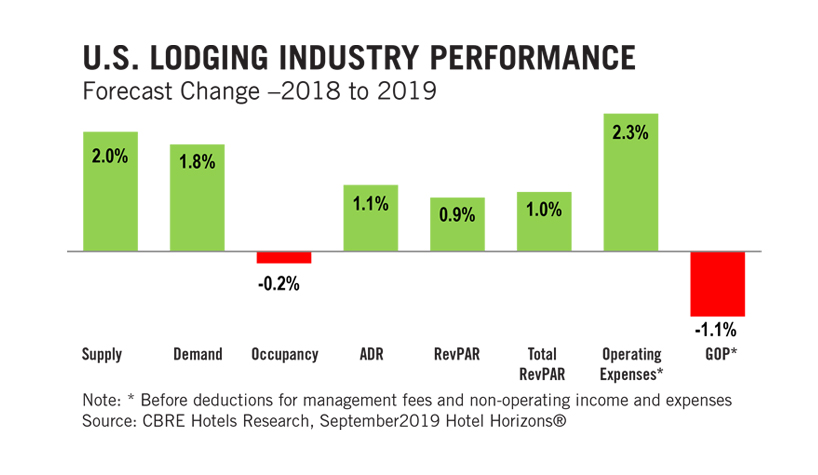 ATLANTA—Shifts in the depth and timing of an expected slowdown in the nation’s economy have impacted CBRE Hotels Research’s outlook for the U.S. lodging industry over the next few years. According to the September edition of Hotel Horizons, CBRE’s forecasts for RevPAR changes in 2019 and 2020 have been adjusted slightly downward, but the outlook for 2021 has improved.

“Changes in various components of the U.S. economy and their relationship to U.S. hotel demand fluctuations are well understood. This is what drives the econometric model that informs our forecasts for U.S. lodging market performance,” said R. Mark Woodworth, senior managing director, CBRE Hotels Research. “As a result of the rapidly changing prospects for the nation’s economy, we have adjusted our forecasts of lodging demand and ADR appropriately.”

“Fortunately, room rates alterations tend to lag occupancy changes. Therefore, the annual increase in ADR will remain steady at 1.1%,” said Woodworth. For the year, CBRE is now projecting a RevPAR increase of just 0.9%, 110 basis points below the forecast the firm published in June of 2019.

The 2019 demand slowdown will show its negative impact on ADR next year. CBRE’s forecast for ADR growth in 2020 has been lowered to 2%. “Downward pressure on room rates also will come from a rise in new hotel openings,” Woodworth added. “Our 2020 supply growth forecast now is 2.1%, which is greater than the long-run average of 1.8%. This will drive a 0.8% national occupancy rate decline for the year.” For 2020, CBRE is forecasting a RevPAR growth rate of 1.2%. This, too, is a downward adjustment from 90 days ago.

While 2019 and 2020 RevPAR growth rates are disappointing, the estimated depth of CBRE’s economic slowdown forecast for 2021 has been lessened. “The economy is forecast to remain somewhat anemic in 2021. GDP growth is forecast to be 1.5%, and employment levels are projected to decline by 0.2%,” Woodworth said. “While these numbers are not inspiring, they do represent a rosier outlook than what we were thinking when we developed our June forecasts.”

In reaction to the economic projection modifications, CBRE’s forecasts for demand and ADR growth in 2021 have been adjusted upward. CBRE now forecasts a 0.8% RevPAR gain in 2021, up from the 0.5% decline projected in the firm’s June 2019 reports.

Why Not A Recession?

“There has been a lot of speculation recently regarding the health of the economy over the next few years. Most people believe the economic indicators are pointing downward. The question is whether or not the U.S. economy will dive into the textbook definition of a recession,” said John B. (Jack) Corgel, Ph.D., professor of real estate at the Cornell University School of Hotel Administration and senior advisor to CBRE Hotels Research. The in-house view from CBRE Econometric Advisors is that the U.S. economy will slow down, but not fall into a recession.

“It is tough to deny that the negative impacts of a trade war, falling exports, the employment growth slowdown, falling CapEx, the inverted yield curve and economic weakness in Europe and Asia will contribute to a domestic economic slowdown. However, there are several factors that indicate the economy will not reach a full fledge recession. These include falling interest rates, weak inflationary pressures that make it easier to cut rates further, strong consumer demand and policy easing in China,” Corgel said.

“We foresee estimated annual GDP growth rates ranging from 1.5% to 2.3% from now to 2022.  While these numbers anticipate weaker economic growth, they do not anticipate any major setbacks in the economy. Our forecasts of RevPAR change follow the same general pattern—growth, but at low levels ranging from 0.8% to 1.9%,” Woodworth noted.

While the economy continues to support revenue growth, the ability to achieve greater profits will be difficult. With forecast revenue increases hovering around one percent, hotel operators will need to keep expense growth under two percent to achieve nominal gains in Gross Operating Profits. This will be a challenge given that expenses have averaged 4% annual growth over the long run, and the labor market is so tight.

“To put things in context, however, profit margins and cash flows are at record highs, so there is some cushion on the bottom line to absorb the forecast slowdown in the economy and the lodging industry,” Woodworth concludes.