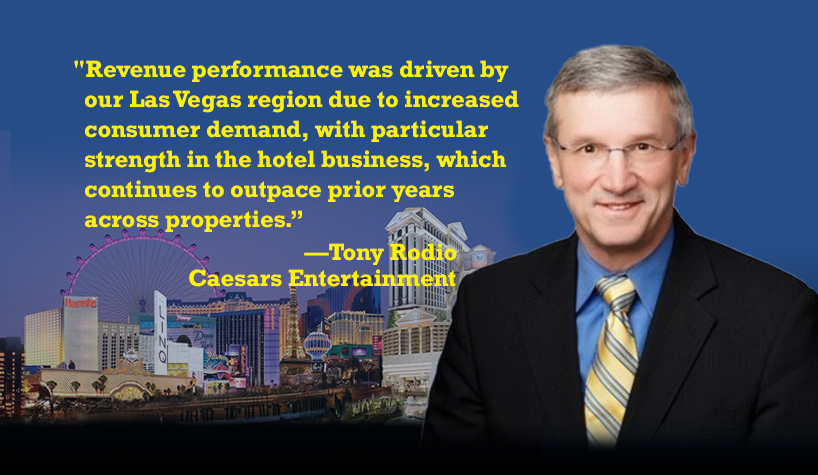 LAS VEGAS—Caesars Entertainment Corporation reported a 2.3% increase in revenue to $2.24 billion in the third quarter of 2019 ahead of its merger with Eldorado Resorts Inc.

“We are pleased to have delivered solid financial results in the third quarter with net revenue growth across all business verticals, despite headwinds across our portfolio,” said Tony Rodio, CEO, Caesars Entertainment. “Revenue performance was driven by our Las Vegas region due to increased consumer demand, with particular strength in the hotel business, which continues to outpace prior years across properties. Coupled with corporate expense reductions, this led to strong adjusted EBITDA growth as well as margin expansion.”

Caesars filed a definitive proxy statement with the SEC on Oct. 11, 2019, and the shareholder votes for each of Caesars and Eldorado Resorts Inc. on the merger agreement will occur on Nov. 15, 2019. The two companies have made significant progress on the integration planning process, and the merger of the two companies  remains on track to close in the first half of 2020, subject to all required regulatory approvals.

In September, Caesars reached an agreement to sell the Rio All-Suite Hotel & Casino for $516.3 million. The sale is expected to close by the end of 2019, and Caesars will continue to operate the Rio for a minimum of two years pursuant to a lease agreement to be executed at the closing. The property will remain part of the Caesars Rewards network during the term of the lease.

Net revenues increased $51 million driven by growth in all business verticals, with significant growth in Las Vegas due to healthy consumer demand. Las Vegas gaming revenues grew 17.3% year over year due to favorable hold and higher gaming volumes. Las Vegas hotel strength also came from solid year-over-year growth this quarter in ADR, which increased 3.7%, and RevPAR, which increased 7.0%. Las Vegas occupancy was 95.6% in the quarter, up from 92.6% in 2018. Other U.S. net revenues declined $6 million year over year due to competition in Atlantic City, NJ, and Southern Indiana. All other net revenues decreased $6 million year over year, primarily due to lower gaming volumes in the U.K. Across all casino properties, hold had a favorable impact of $31 million to $36 million this quarter compared to the prior year, and was $10 million to $15 million above expectations.

Adjusted EBITDA increased $35 million primarily due to the higher revenues generated across all business verticals offset by increased competition in Atlantic City and Southern Indiana. All other adjusted EBITDA loss increased by $7 million year over year primarily due to lower revenues in international properties, partially offset by reduced corporate expenses. Across all casino properties, hold had a favorable impact of $26 million to $31 million compared to the prior-year period, and was $10 million to $15 million above expectations.