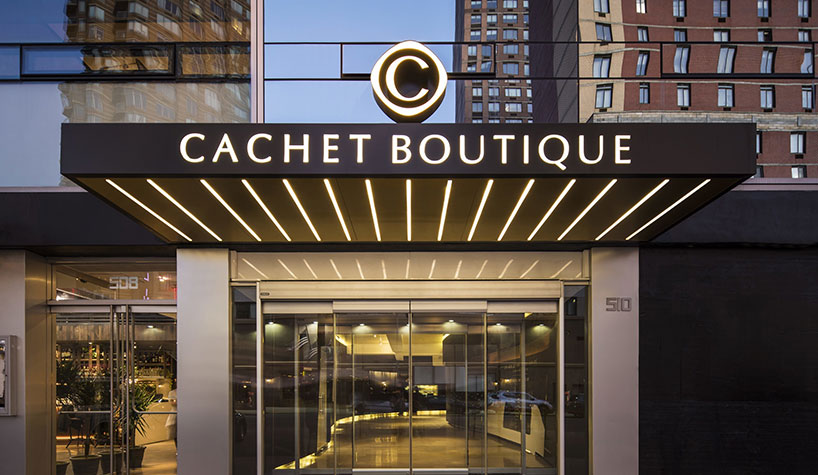 NEW YORK—Cachet Hotel NYC has entered into a partnership with Live Nation, a leading live entertainment company, to procure and produce top entertainment and concerts at the Cachet Hotel’s newly built concert venue and event space.

The venue, which recently opened within the Cachet Hotel NYC located at 510 West 42nd St., features state-of-the-art audio-visual concert technology to create one of the most dynamic concert atmospheres for concert-goers in New York City, according to the company.

The Live Nation-Cachet Hotel partnership will elevate concerts and performances to a new level and allow guests to have VIP concert experiences. Concert-goers can enjoy international recording artists, comedians and performances while dining before, during or after the show within one of the hotel’s two dining destinations, Treadwell Park and Merchants Hospitality’s new Merchants Steakhouse, opening in January 2020.

The hotel was acquired and developed by Merchants Hospitality and principals of Cachet in 2017. After an extensive renovation, the hotel opened in the summer of 2018 and in September 2018, Treadwell Park and the Playboy Club opened.

While ticketed events are open to the public, dining guests of Merchants Steakhouse and Treadwell Park, along with Cachet Hotel VIPs, will have priority seating in the new Cachet concert venue.

Accor, AEG Sign Global Assets Deal INTERNATIONAL REPORT—Accor and AEG have extended their partnership to a global deal and will incorporate a…
HB Exclusive: Live TV programming tops guestroom entertainment preferences Now that guests are traveling again, they still want to be able to relax in their…
Castell Project and She Has a Deal form JV Castell Project, a 501(c)3 nonprofit organization dedicated to accelerating the careers of women professionals in the…
15,000 U.S. Hotels Sign Up to Support Healthcare Community WASHINGTON—The American Hotel and Lodging Association (AHLA) revealed that more than 15,000 hotels have signed up…