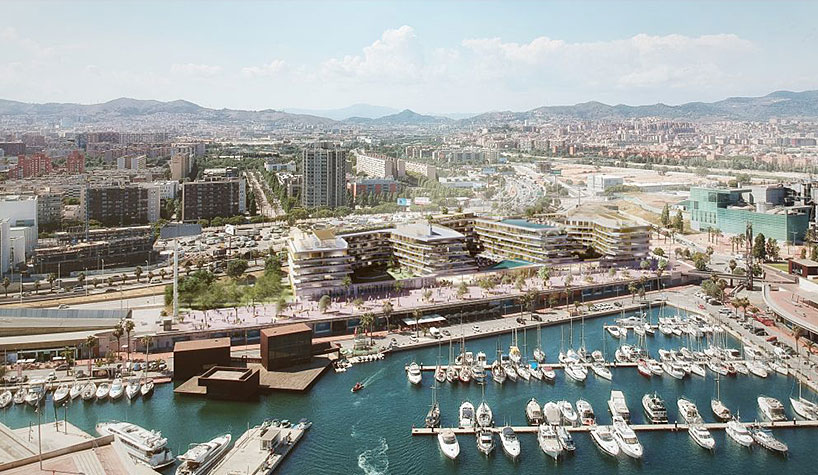 A rendering of the Hard Rock Barcelona

Hard Rock to Open in Barcelona

The project is owned by ASG’s fifth real estate fund and will be operated by Hard Rock Hotels. It is the fourth project in ASG’s Spanish hotel development strategy following the dramatic surge in visitor growth in Spain.

An affiliate of Hyatt Hotels Corporation has entered into a franchise and related agreements with Realtejo – Hotelaria e Turismo, S.A., owned subsidiary of United Investments Portugal and Fibeira, to develop the first Hyatt branded hotel in Portugal: Hyatt Regency Lisbon.

Expected to open in late 2020, the hotel will have 200 hotel rooms and apartments, and will be located between Rua Guerra Junqueiro and Avenida da Índia, a waterfront location facing Tejo River.

The foray into Lisbon, Portugal’s coastal capital city, is an important milestone for Hyatt, signifying its growing brand presence in increasingly competitive markets across the continent. The number of tourists visiting Portugal has increased for eight consecutive years, with 12.8 million travelers visiting in 2018 alone.

Hyatt Regency Lisbon will offer a wide range of intuitive facilities, including a spa, a swimming pool, a rooftop terrace bar with views over the river, as well as a courtyard and garden.

The hotel is located in the capital city of Canada, a few miles away from the Canadian Tire Center, home to the NHL’s Ottawa Senators. The 69-room property is recommended for travelers visiting for sporting events and concerts. The boutique hotel is also in close range to the downtown area, where travelers can enjoy an array of activities such as shopping, nightlife and dining. Guests are also close to the Rideau Canal, Parliament Hill, Canadian Museum of History and ByWard Market.

Kimpton Hotels and Restaurants has opened its first property in Glasgow, Scotland.

Kimpton Blythswood Square Hotel is situated in a landmark location with a storied past. The hotel has original architectural features such as marble fireplaces, rich wood paneling and lofty ceilings.

The 113 rooms and suites offer a sense of warm sophistication with marble bathrooms, luxury amenities, natural light and a refined design that serves as the ideal backdrop for any Glasgow getaway, the company reports.

Bo & Birdy at Kimpton Blythswood Square Hotel is the newest Kimpton restaurant and bar globally. Inside an elegant dining room, diners can enjoy the best of Scottish ingredients in a relaxed, informal setting. Under the culinary guidance of the first female executive head chef of a luxury hotel in Scotland, Gillian Matthews, signature dishes include the Bo & Birdy shortcrust pie and St. Andrews Farmhouse Cheddar macaroni cheese.

Located in the town of Peguera on the island of Mallorca, the resort is the first Secrets Resorts & Spas to debut in Europe and the latest milestone in the company’s ongoing European expansion. The property is currently owned and operated under Hesperia Hotels & Resorts.

As part of its $3.5-million renovation, Secrets Mallorca Villamil Resort & Spa will offer guests 162 refreshed rooms and suites with views overlooking the Mediterranean Sea, with select suites including direct access to a new, exclusive swim-up pool. Guests can also enjoy the addition of two sunrooms, including one reserved for Preferred Club guests.

Secrets Mallorca Villamil Resort & Spa will be the 16th hotel for the Secrets Resorts & Spas brand, with properties spread across Costa Rica, the Dominican Republic, Jamaica and Mexico. ALG and Hesperia Hotels & Resorts also plan to launch Secrets Lanzarote Resort & Spa by the end of the year.

IHG has opened Hotel Indigo – Stratford upon Avon, marking the brand’s debut in the heart of the historic market town.

A slice of bygone England, Stratford-upon-Avon is a magnet to visitors from around the world who make the pilgrimage to visit the birthplace of William Shakespeare and marvel at one of the most famous theaters in the world: Royal Shakespeare Theatre.

The hotel has 93 guestrooms with designs inspired by the history of the local neighborhood. Each room pays homage to the town’s heritage by using classic English materials such as wool and raw wood. A combination of antique furniture pieces and modern fixtures aim to create a contemporary space that celebrates the past with a modern twist.

The hotel guestrooms have three designs, which are inspired by the Bard and reflect Stratford’s history, which stretches back to medieval times:

The hotel’s exterior offers a blend of tradition and modernity. The facade dates back to the 16th century and was originally a public house. More recently, the building has been extended to include a new contemporary wing from the 1960s. Throughout the property, guests will find a carefully curated selection of contemporary artwork, murals and 3D artifacts inspired by Shakespeare.