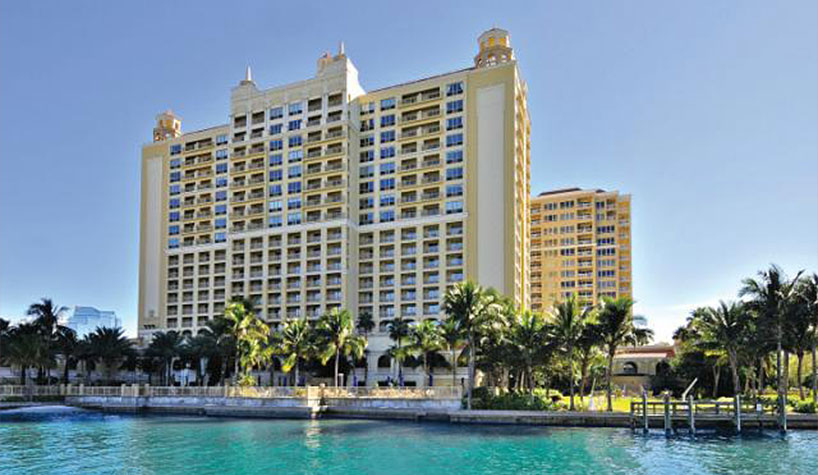 The Ritz-Carlton Sarasota was a Q2 bright spot for Braemar Hotels & Resorts.

DALLAS—Although RevPAR for the second quarter ended June 30 dropped 91.8% year-over-year (YOY), Braemar Hotels & Resorts Inc. was encouraged by the leisure demand drawn to its portfolio once the properties reopened after temporary closures.

“The vast majority of our portfolio had suspended operations for a significant portion of the 2nd quarter. We believe that our portfolio is well-positioned to benefit as our hotels resume operations given that eight of our 13 hotels generate a significant amount of leisure demand,” said Richard Stockton, CEO/president. “We’re pleased to report that this thesis has played out just as we expected. We’re seeing good results across our reopened hotels, and it is clear from the feedback we’re hearing, the guests are excited to be traveling again. It’s still early in the reopening process and the impact of the virus is still unpredictable, but we are encouraged so far.”

Stockton pointed to three properties that have performed well after reopening. “The Ritz-Carlton Sarasota [Florida], Pier House Resort [Key West, FL] and Bardessono Hotel and Spa [Yountville, CA] all had positive hotel EBITDA for the month of June,” he said. “The Ritz-Carlton Sarasota, despite RevPAR being down over 60% during the quarter, had positive hotel EBITDA for the entire second quarter. This was a fantastic result given the disruption to our business during this quarter and a testament not only to the team at the hotel, but also to the fact that a significant amount of the revenue at that property is recurring membership revenue, which is less volatile and more predictable than rooms and F&B revenue. In fact, the property was also able to increase its EBITDA margin by 74 basis points during the second quarter, a truly impressive result.”

Stockton provided an update on the Courtyard San Francisco Downtown and its conversion to the Autograph Collection under the name The Clancy: “The renovation continued during the second quarter, with the completion of the lobby, meeting space, new café and new front entrance. We’re currently working on the restaurant and bar and expect to have the renovation completed in September.”

The property is expected to open as The Clancy when the renovation is finished.

As far as the results for the quarter, Stockton warned, “Please keep in mind that almost all of our properties were closed during the second quarter. So, while this quarter’s financial metrics are interesting from a voyeuristic perspective, they provide little useful direction to inform investors on the state or potential of the business.”

“Many of our hotels are in drive-to leisure markets, which we believe will continue to experience a quicker recovery. Since early May, our focus has shifted to ensure we have strategies in place to accommodate pent-up leisure demand,” said Jeremy Welter, COO. “With 11 of 13 hotels open and operating for the week leading up to and including Fourth of July weekend, the properties achieved ADR of $337 and occupancy of 41% for the week ending July 4.”

He pointed out that hotels in drive-to leisure markets—the Ritz-Carlton Sarasota and four California hotels—performed better than expected once they reopened.

“Ritz-Carlton Sarasota has remained open through the pandemic and saw a steady ramp up starting in May, when Florida beaches began to reopen,” Welter said. “The hotel’s beach club revenue increased relative to last year, with strong membership club usage performance and strong new membership sales. Comparable RevPAR during the second quarter decreased 62.3%.

As for the California hotels, which were reopened to leisure travel on June 12 per state mandates, “The Hilton La Jolla Torrey Pines reopened on May 29. The hotel ramped up quicker than expected. At Bardessono and Hotel Yountville, higher weekend occupancies in June led to some near sellouts. Both hotels reopened on June 8. Ritz-Carlton Lake Tahoe reopened June 19, and business was stronger than originally expected, benefitting from a particularly strong drive-to market. Comparable RevPAR for the property decreased 86.9%, however rate increased $40, or 11.2%.”

COVID-19 Update
In response to the impact of COVID-19 on the hospitality industry, Braemar is deploying numerous strategies and protocols to protect the health and safety of its employees, guests, partners and communities where it operates. Additionally, it has taken steps to ensure that it has additional financial flexibility going forward to navigate this crisis.

Braemar ended the quarter with cash and cash equivalents of $103 million and restricted cash of $41 million. The vast majority of the restricted cash consists of lender and manager held reserves. The company is currently working with its property managers and lenders in order to utilize lender- and manager-held reserves to fund operating shortfalls. At the end of the quarter, there was also $9 million in due from third-party hotel managers, which is Braemar’s cash held by one of its property managers and is also available to fund hotel operating costs.

Braemar estimates that its current monthly cash utilization at its hotels, given their current state of either having suspended operations or operating in a limited capacity, is approximately $5 million per month. Currently, operations at two of the company’s properties remain temporarily suspended.

Update on Business Interruption Income
During the quarter, the company recognized approximately $390,000 of business interruption income for the Ritz-Carlton St. Thomas related to lost profits for the period of March through May 2020 due to the impact of Hurricane Irma.

Hyatt Encouraged by China Recovery CHICAGO—Hyatt Hotels Corporation reported a $236 million loss in its Q2 earnings call, but is encouraged…
With 11 Hotels Temporarily Closed, Braemar is Making Plans for the Future DALLAS—Braemar Hotels & Resorts Inc. released its Q1 results, noting that while the quarter started off…
Braemar to acquire Dorado Beach, A Ritz-Carlton Reserve for $186.6M; more sales Companies are getting in end-of-year acquisitions as Braemar has entered into an agreement to acquire Dorado…
Braemar Reports RevPAR Decline, But Occupancy Lifts in Leisure DALLAS—Braemar Hotels & Resorts Inc. has reported a net loss of $18.7 million, a 65.6% decline…