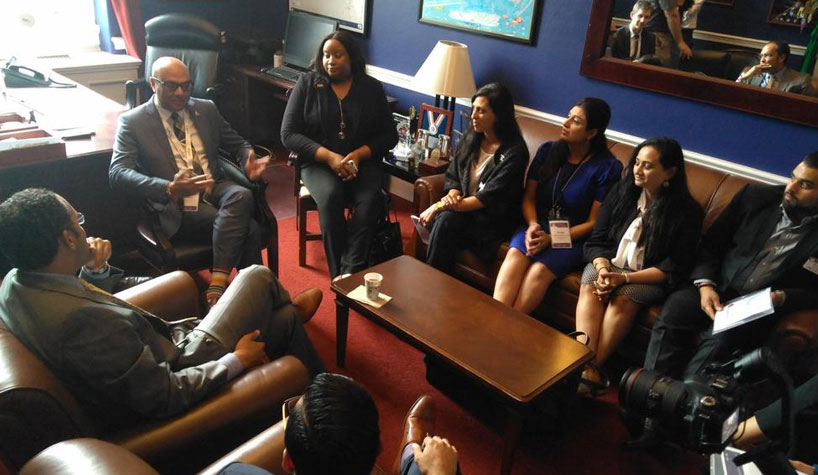 AAHOA Chairman Hitesh (HP) Patel and other hoteliers meet with Rep. Will Hurd of Texas.

Supporting nearly eight million American jobs, putting $600 billion into the U.S. economy each year, and contributing $170 billion in federal, state and local taxes, the hotel industry’s impact is undeniable. As AHLA and AAHOA members met with elected officials and congressional staff, they advocated to make permanent the tax cuts in the Tax Cuts and Jobs Act, policies that encourage international travel and tourism to the United States, and new protections for consumers from online hotel booking scams.

AAHOA President and CEO Chip Rogers said, “As Congress confronts the many challenges facing our country, hoteliers are united in advocating for our employees, our businesses and our industry. AAHOA is pleased to once again join with AHLA for our Legislative Action Summit. Advocating for hoteliers in our nation’s capital is essential with all the important issues being addressed by Congress.”

The lodging industry continues to focus on growth and the nation’s economic resurgence while improving the employment landscape. The lodging industry has seen 102 straight months of economic growth, and each day, nearly five million people check into a hotel, spending nearly $500 billion at local businesses during their trips. The hotel industry creates competitive, good-paying jobs with clear pathways for professional development and advancement, the organization said.

Report: $16.8B Loss in Tax Revenue From Hotels in 2020 Due to COVID-19 Impact WASHINGTON—As a result of the sharp drop in travel demand from COVID-19, state and local tax…
Airbnb Signs First Tax Collaboration in Central, Eastern Europe SAN FRANCISCO—Airbnb has signed the first partnership on the automated collection of tourist taxes in Central…
Florida hoteliers step up after Hurricane Ian Offer free and discounted stays, fundraisers
Survey: Increasing number of hoteliers plan to attend conferences The results of a recent Beyer Brown survey of hospitality industry executives revealed that 75% of…