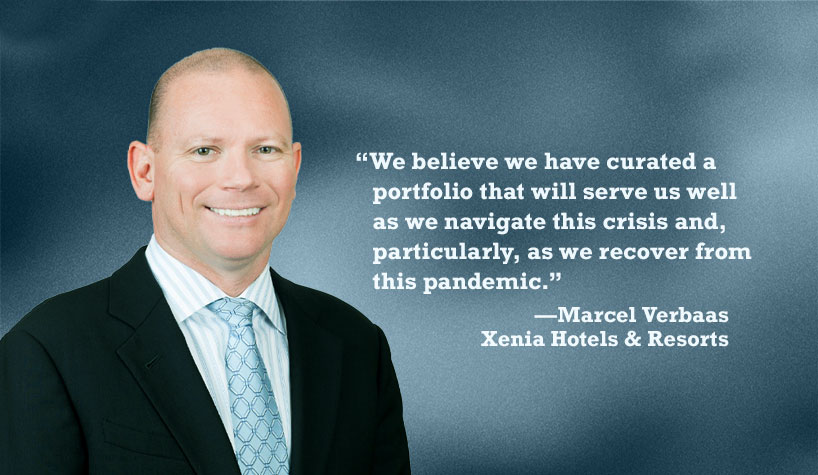 ORLANDO, FL—Despite the fact that Xenia Hotels & Resorts Inc. recorded a net loss of $99.1 million in the second quarter ended June 30, Marcel Verbaas, chairman/CEO, remains confident in his company’s recovery coming out of the COVID-19 crisis.

“Not all hotel portfolios are created equal, and we are extremely proud of the portfolio that we have today. We believe we have curated a portfolio that will serve us well as we navigate this crisis and, particularly, as we recover from this pandemic,” he said. “Our management team has weathered federal downturns in the past. And while none were as extreme as the current crisis, each of these experiences have helped us solidify our view that diversification is crucial throughout any part of the cycle.”

The CEO focused on three elements as keys to the company’s revival: geography, brand affiliation and renovated properties.

“Our hotels and resorts located in key leisure and drive-through markets were the first to reopen as we benefited from our long-standing strategic focus on these types of assets and locations,” he said. “We believe that having a broad geographic presence without heavy concentration in a handful of urban, gateway markets has proven to be beneficial. Being affiliated with the strongest brand at a time when trusted brands matter the most is also a major strength. Having a high-quality, recently renovated portfolio gives us confidence that our properties are well suited for the inevitable recovery.”

Month to date, through July 25, Xenia’s open properties were keeping an average occupancy of nearly 25%, said Verbaas, which was “consistent with the level that we saw in June for our properties that were open at that time, and significantly above the levels where it would be prudent to consider suspending operations of any of these properties.”

“We have been pleased at our portfolio’s performance thus far,” said Verbaas. “We believe it is critical to focus on the positioning of our properties going forward and capturing as much demand as possible in the third and fourth quarters of 20/20 and into 2021.”

“We believe that our ability to work side-by-side with our operators and pivot to short-term leisure demand has been—and will remain—crucial in the driving occupancy in our hotels and resorts that are currently open and operating,” said Verbaas.

Operations Update
The impact of the COVID-19 pandemic on the global economy, lodging industry and the company’s operations was extreme during Q2, with performance beginning to gradually improve in June. In response to the rapidly deteriorating fundamentals in March, the company worked with its hotel operators to reduce property expenses and manage working capital requirements. In March and April, Xenia temporarily suspended operations at 31 of its 39 hotels, and only eight hotels remained open and operating for the full quarter. The company began reopening operations at its temporarily shuttered properties during the month of May beginning with five smaller, leisure-oriented hotels and resorts, with a focus on attracting local and drive-to business. In June, the company resumed operations at 13 additional properties. As of June 30, 26 of 39 hotels and resorts were open, representing 61% of Xenia’s hotel rooms.

“We currently anticipate that the four remaining properties in our portfolio will recommence operations before the end of the year,” said Verbaas.

Upon recommencement of operations, several of the company’s properties initially operated with limited room inventory and the majority had reduced F&B operations due to local and state ordinances, social-distancing requirements and lower anticipated demand.

Transactions
The anticipated sale of the 522-room Renaissance Atlanta Waverly Hotel & Convention Center is not expected to close as contemplated in the amended agreement. As a result, the company expects to receive the $7.75 million nonrefundable deposit, which is currently being held in escrow.

Subsequent to quarter end, Xenia entered into a settlement agreement regarding the deposit which had been held by the escrow agent in relation to the terminated Kimpton portfolio sale agreement. As a result of this settlement, the company received $19 million of the $20 million nonrefundable deposit.

“While we are disappointed that neither of these transactions, nor the sale of Renaissance Austin, closed as a result of the virus, we are pleased that we have received approximately $29 million in deposits while retaining ownership of these nine high-quality hotels,” noted Verbaas.

Impairment Loss
During Q2, the company recorded a non-cash goodwill impairment charge of $3.7 million related to Bohemian Hotel Savannah Riverfront, Autograph Collection. The goodwill impairment was directly attributed to the ongoing effect of the pandemic coupled with changes in the supply and demand dynamics in the Savannah, GA, market since the acquisition of the hotel in 2012, both of which are expected to reduce the future projected operating income.