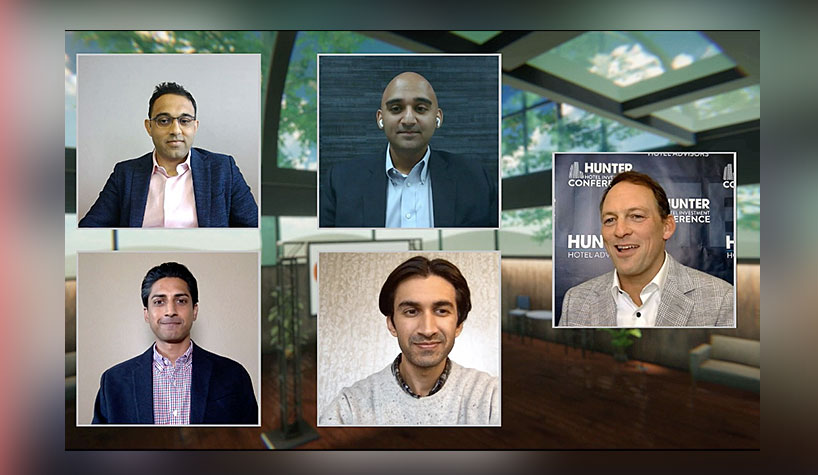 Both Dow and Rogers were asked what their organizations are fighting for in Washington.

“[There are] several things we’re working on. One is for the DMOs—destination marketing organizations—to get in the PPP program. They were never included, and we had a good call with [Senator] Marco Rubio last week about that,” Dow said. “Very important to AAHOA members: We want hotels under 300 rooms classified as small businesses, even though they might be part of a larger network. We’re also trying to expand the recovery loan program. Most important is liability protection. You don’t need somebody going into an AAHOA member’s hotel and going home and saying they got COVID in your property, and then they try to sue you. We want to increase testing. We want to expand the employee tax credit and EDA [Economic Development Administration] grants to promote health and safety. Lastly, we’re looking for $10 billion for airports. They’re so critical to us.”

Rogers stressed that his efforts are keyed on trying to make sure that hoteliers can remain afloat. “There’s a lot of folks out there talking about recovery, promotion, stimulus and those things, and those are clearly important, no question about it. But, right now, so many in our industry are just trying to keep the doors open and make sure that there’s a job for those employees to come back to,” he said. “One of the most successful things that has happened has been the PPP. Problem is, the PPP was originally created to last about eight to 10 weeks. We now know that this problem is going to exist for the rest of this year and well in the next year, and probably many years in our industry. We’re asking specifically for another round of PPP funding for those businesses that have lost 35% or more of their revenue. The current HEALS Act offers that at a 50% or more revenue loss. We believe that should go down to about 35%.”

He noted that two other areas need immediate addressing. “[One is] the Main Street Lending Act. Effectively, all hoteliers have been written out of the law because of the way that the debt tests are written in that legislation. No one in our industry has gained access to any Main Street Lending funding, and we think that that is a great place where money exists right now today that Congress does not have to reappropriate the could be eligible for members to access immediately,” he said. “The second part is how we fix the CMBS problem. We know that about a third of all hotel debt is CMBS. We also know that about a quarter of all CMBS loans are in delinquency already. This is going to quickly be followed by foreclosure, and it’s going to devastate our industry. So, here’s another area where Congress and or the administration can take action to fix this problem without any new laws. We can fix the CMBS problem by creating a vehicle that allows the government to have preferred equity so that those folks with CMBS loans can gain access to something just to keep their businesses afloat again.”

Dow discussed the eagerness of travelers and the efforts being made to bring them back. “We do a lot of research on sentiment, and 49% of the people say they are going to take a trip involving a hotel in the next couple of months. It goes up to 60% when they say they know that right health and safety guidelines are there,” he said. “I was talking to Ed Bastian, the CEO of Delta, recently and he was saying, ‘You know, people think that the planes have the same air going around.’ He told me all the things they are doing, and said, ‘If it was so bad to travel, why aren’t my flight attendants sick? They’re on flights all day long and the incidents are so low compared to the public.’ They used to say 60 years ago, as goes General Motors goes the U.S. economy. I maintain, and we’ve got every bit of fact to back this up, that as goes travel goes the U.S. economy.”

He continued, “So, it’s important to bring our industry back, and Chip and I and about 50 others have been working on a recovery campaign called ‘Let’s Go There,’ and when it’s right for people to travel, the whole industry [is going to] get involved in this any way they can to start saying, ‘America, it’s time to start planning that next trip.’ We’re going to talk about the excitement of what they missed.”

Young Hotel Executives Weigh In
Later in the day, following the “What the Data Says: Before, During, and After the Pandemic” panel, Teague Hunter, president/CEO of Hunter Hotel Advisors, moderated a session titled “A View from Young Professional Hoteliers: Driving the Future of the Industry Beyond COVID-19.” Second-generation hoteliers, all AAHOA members, discussed how their businesses are doing, and what they think is in store for the future.

Jatin Patel, managing principal and CIO/CFO, Peachtree Hotel Group, on the state of his business, noted, “Our investor appetite in this current market has obviously shifted. The profile of our investors has not changed since we first started the company back in 2007. They are always looking for risk-adjusted returns with capital appreciation, and obviously that’s different today than it was six months ago since COVID began to spread across the country. You’ve got what was core and value-add investing really shifted now into a look at stress investing. Obviously, since COVID came here, spreads have widened, which means that the cost of capital is more expensive and it costs more money for debt. For all of our hotels, properties have plummeted, and then the government’s come in with their assistance that’s allowed for us to have kind of a stepping stone as we get through this.”

JR Patel, president/CEO of Helix Hotels, believes the industry is already past its bottom. “I would imagine most of us here have been improving, but I think July 4th weekend was a bit of an acid test for our properties and our industry as a whole,” he said. “We’re starting to see a bit of a plateau across our portfolio, and I think the industry [is] as well. In a post-COVID world, I think we’re going to continue to see sort of flat performance and maybe moderate growth in it. But, it’s a different world. It’s a different world how we operate and transact. It really is a rewriting of the book.”

Harshil Patel, VP, Champion Hotels, said running his company is “almost like running like a mom-and-pop again, where you’re literally watching every single check being written, every invoice coming in. Payroll is the biggest item that you can control, so we’ve had to really slim down all of our staffing. In general, we’re seeing extended-stay properties perform. They stay pretty stable. They did have drops in occupancy, but not as bad as all of our limited-service and select-service hotels. We’ve been noticing our interstate properties are performing better than downtown properties, and I think it’s just mostly people driving instead of flying. We’re also seeing the Midwest got hit for us harder than properties we have in Florida and states where there’s still some type of leisure demand.”

Raj Patel, chief development officer of Hawkeye Hotels, added that, although things are bleak right now, the industry will survive. “COVID aside, there was already a saturation issue. There’s an oversupply issue. There were too many plans coming out, an overabundance of operators and developers and an overabundance of cheap capital. So, when you pair all that together, we were already headed in a downhill slope, and you tack COVID on top of it,” he said. “The bright side of that is there’s no country in the world that’s more resilient than the United States. Certainly, [our industry] will come back; the time that it’s going to take is what’s unknown. What I feel good about is that the operators and developers who are meant to stay in this industry will grow stronger from this—they will strengthen and pick up assets. All of us here are mostly second generation. We have our first generation to lean on and ask questions, although they’ve never gone through something like this either. But, for us, to go through it with decades more exposure in this industry, I feel good about what this is going to do for us long term.”