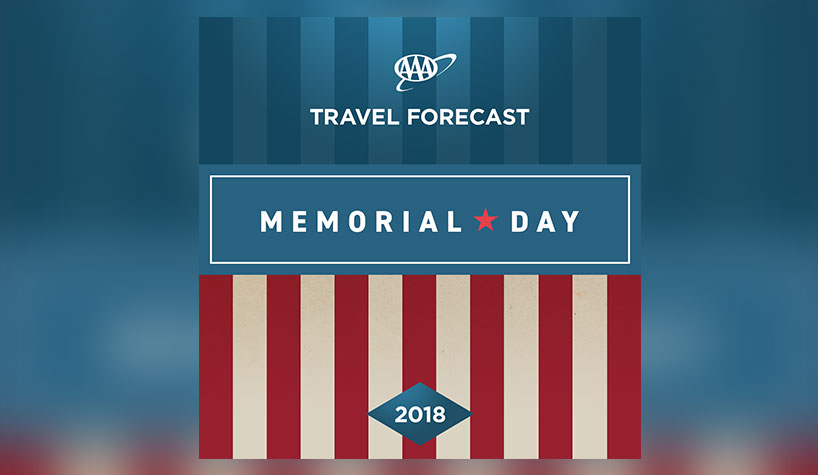 ORLANDO, FL—According to AAA, more than 41.5 million Americans will travel this Memorial Day weekend, nearly 5% more than last year and the most in more than a dozen years. With nearly two million additional people taking to planes, trains, automobiles and other modes of transportation, INRIX, a global transportation analytics company, expects travel delays on major roads could be up to three times longer than normal, with the busiest days being Thursday and Friday (May 24-25) as commuters mix with holiday travelers.

“The highest gas prices since 2014 won’t keep travelers home this Memorial Day weekend,” said Bill Sutherland, SVP, AAA Travel and Publishing. “A strong economy and growing consumer confidence are giving Americans all the motivation they need to kick off what we expect to be a busy summer travel season with a Memorial Day getaway.”

For the 36.6 million Americans traveling by automobile, INRIX, in collaboration with AAA, predicts drivers will experience the greatest amount of congestion on Thursday, May 24, and Friday, May 25—in the late afternoon as commuters leave work early and mix with holiday travelers. Several major U.S. metro areas could experience double the travel times compared to a normal trip, while New Yorkers could see three times the delay.

“Ranked the most congested country in the world, U.S. drivers are all too familiar with sitting in traffic,” said Graham Cookson, chief economist and head of research, INRIX. “Drivers should expect congestion across a greater number of days than in previous years, with the getaway period starting on Wednesday, May 23. Our advice to drivers is to avoid peak commute times in major cities altogether—traveling late morning or early afternoon—or plan alternative routes.”

Higher gas prices not deterring travelers
The 88% of travelers choosing to drive will pay the most expensive Memorial Day gas prices since 2014. Gas prices averaged $2.72 in April, an increase of 33 cents from last year, due to expensive crude oil, record gasoline demand and shrinking global supply. However, these higher prices are not keeping holiday travelers home, with automobile travel expected to increase for the fourth straight year, by nearly 5% over last Memorial Day.

While road trippers will pay higher prices at the gas pump this year, travelers can expect some relief in their wallets when paying for airfare, car rentals and most mid-range hotels. According to AAA’s Leisure Travel Index, airfares are 7% lower than last Memorial Day, landing at an average price of $168 for a round-trip flight along the top 40 domestic routes. At $59, the average daily cost of a car rental this Memorial Day is the lowest rate in the past four years and 11% cheaper than last year.

For those planning to kick off their summers with an overseas vacation, Europe is a major draw this year. Rome, Dublin and London are the most popular international travel destinations for Memorial Day weekend.

According to Hertz, a 40-year AAA partner, the busiest airport pick-up locations for travelers renting a car this Memorial Day are expected to be Orlando (MCO), Las Vegas (LAS), Atlanta (ATL), Los Angeles (LAX) and Kahului, HI (OGG). The busiest day for rental pick-ups is expected to be May 25, with an average rental length of nearly six days, as travelers look to take advantage of the long holiday weekend.

AAA: 39.2M to travel for Memorial Day 8.3% increase from 2021
AAA: Memorial Day holiday travel to rebound to more than 37 million AAA Travel expects a significant rebound in the number of Americans planning to travel this Memorial…
AAA: Fewer Americans Traveling This Thanksgiving Amid Pandemic ORLANDO, FL—Thanksgiving will be on the lighter side when it comes to the typical number of…
AAA: More than 47M Americans to take Independence Day getaway More than 47.7 million Americans will take to the nation’s roadways and skies for the Independence…