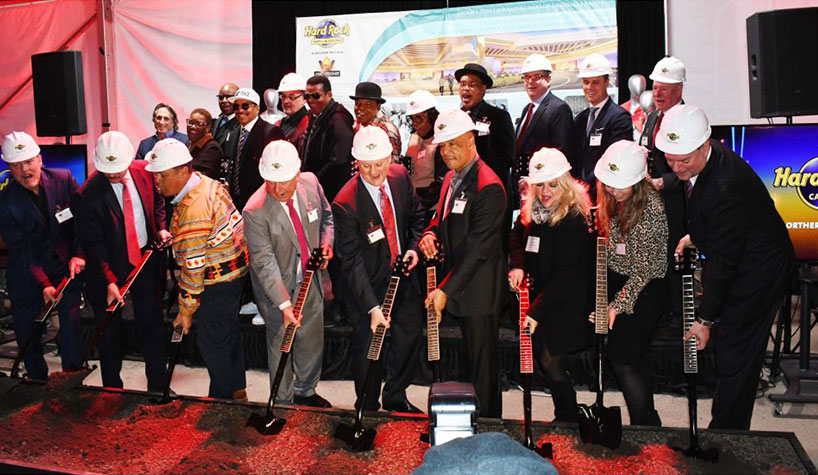 The 200,000-sq.-ft. entertainment complex is a joint venture between the two companies and will include six food venues, a sportsbook, a retail shop, a 2,000-seat showroom and more than 2,130 gaming positions. Phase two of the project will see the addition of a 200-plus-room hotel and a multilevel parking garage.

Hard Rock Casino Northern Indiana is forecasting more than $20 million annually in tax revenue and payments to the City of Gary and surrounding communities. Approximately 1,000 construction jobs, with an emphasis to hire union labor, and an estimated additional 500 jobs are expected. Additionally, Spectacle Entertainment has a commitment to local investment with a pledge to work with minority- and women-owned businesses.

The 700-room Hyatt Regency Salt Lake City will be located on the southeast corner of the lot on which the Salt Palace Convention Center sits and will be built adjacent to the convention center’s public space. The 25-floor property will offer 60,000 sq. ft. of indoor meeting space, including a 23,138-sq.-ft. Regency Ballroom and a 14,682-sq.-ft. junior ballroom, as well as 7,400 sq. ft. of outdoor event space. Estimated to cost $377 million, the project is scheduled to be completed and hosting its first guests in October 2022. The hotel will have a restaurant on the first floor, a lobby bar, another restaurant and a fitness center on the sixth floor, adjacent to an outdoor amenity area that will include a pool and terrace for events and other activities.

The Wayfinder Set Sights on RI

Set for a May opening, The Wayfinder Hotel comes from hotel developer Phil Hospod, who helped open the Line DC, Freehand New York and Hoxton Williamsburg.

The Wayfinder is one of three new hotels opening in Newport, RI, this spring, including The Wharf and The Brenton Hotel, signaling that the destination is about to undergo its own renaissance.

There’s a focus on the environment as this project is an adaptation of an existing Newport property. Aiming to have close to 0% single-use plastics as possible, the hotel will provide in-room glass water bottles with hydration stations and recyclable in-room coffee pods. It’ll also partner with Save The Bay on beach cleanups and other guest experiences.

Cedartree Hotels is set to open its first hotel in the U.S in early 2021. The 120-room property will be located in Hillsboro, OR, a short distance from downtown Portland. Guests will be offered a Japanese-style hotel experience with a variety of distinctive Japanese amenities, a full-service restaurant, conference rooms and guestrooms.

Waterfalls will be a 68-seat, full-service restaurant open for breakfast, lunch and dinner. There will also be Kiyomizu, a Japanese sake bar. Elsewhere there will be a heated indoor pool and Onsen stone bath, offering a Japanese-style spa experience.

Offering a total of 2,500 sq. ft. of space with the latest audio-visual capabilities, Cedartree Hotel will be available for meetings, conferences and events. Culture will come alive in the Sado Room, a representation of a traditional tatami room, where Japanese tea ceremony, Japanese flower arrangement classes and other cultural events will be held for guests and the local community alike.

HB Exclusive: San Manuel Casino becomes Yaamava’ Resort & Casino at San Manuel The San Manuel Band of Mission Indians has revealed that San Manuel Casino is now Yaamava’…
Queensgate Investments Acquires Freehand Hotels for $400M LONDON—Queensgate Investments has acquired Freehand Hotels from a seller consortium including The Yucaipa Companies and Sydell…
Caesars to invest $400M into Atlantic City resorts by ‘23 Caesars Entertainment Inc. has revealed a $400-million master plan investment in Atlantic City, NJ, where it…
Keeping It Clean and Safe: Hard Rock Atlantic City and More INTERNATIONAL REPORT—As the hotel industry readies for its reopening from the devastation of the COVID-19 pandemic,…