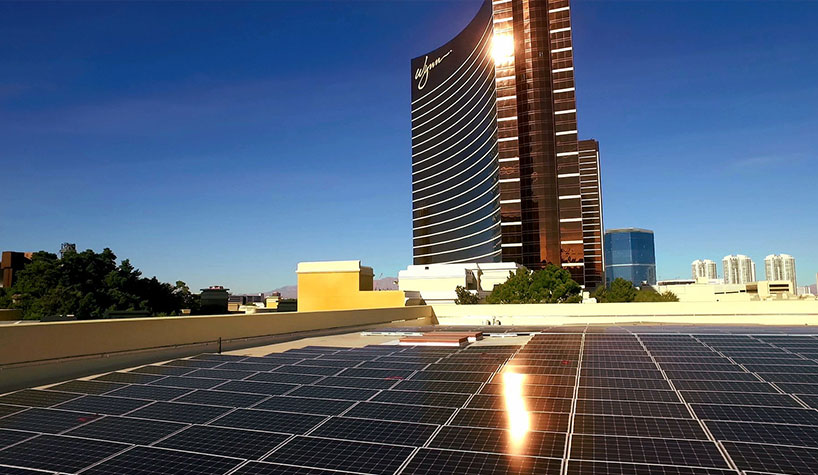 LAS VEGAS—Wynn Las Vegas marked a new renewable energy milestone with the start of the commercial operation of the Wynn Solar Facility here earlier this week.

The new 160-acre facility is now offsetting up to 75% of the resort’s current peak power requirements, the largest percentage of renewable energy used by any resort in Las Vegas and an industry first for a gaming operator in Nevada, according to the company. The facility will eventually be used to power the resort’s new meetings and conventions space expansion, set to open in March 2020, with 100% renewable energy.

“Nevada is the most dynamic state for renewable energy development, and the opening of the Wynn Solar Facility is a watershed moment for the resort industry,” said Erik Hansen, chief sustainability officer for Wynn Resorts. “The investment in renewable energy and the integration of energy-efficient measures must be a larger part of the way responsible companies conduct business today. Our solar facility proves that integrating large-scale energy efficient measures can be done in a way that benefits the bottom line while also enhancing the guest experience.”

Owned and operated by Enel Green Power North America, Inc., the facility is a stand-alone solar photovoltaic project located in Fallon, NV, adjacent to the existing Stillwater hybrid facility, and shares the existing connection infrastructure with the geothermal-solar hybrid plant. The Wynn Solar Facility generates up to 27 MWdc of renewable energy, equivalent to 20 MWac, to power the resort. With this renewable energy resource offsetting such a sizable percentage of Wynn’s peak power needs, the resort will far exceed requirements outlined in the Nevada Renewable Portfolio Standard.