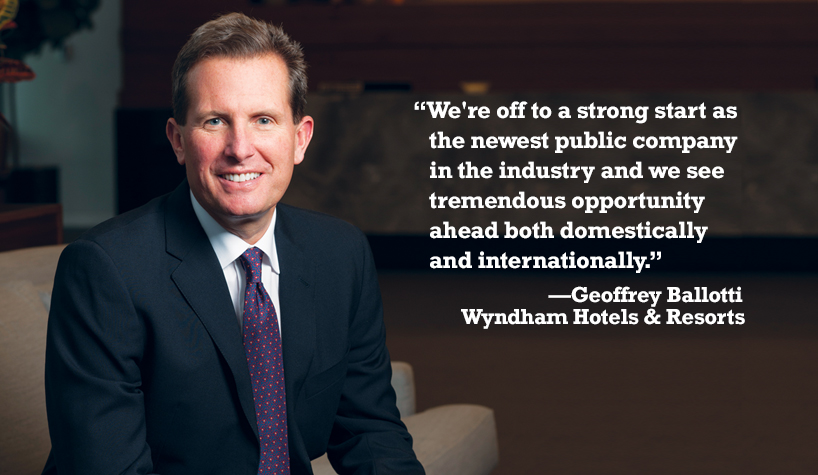 Wyndham delivered organic growth in global RevPAR and system size; grew its development pipeline both sequentially and year-over-year to 176,000 rooms; and made strides in the integration of La Quinta.

“We’re off to a strong start as the newest public company in the industry, and we see tremendous opportunity ahead both domestically and internationally,” said Geoffrey Ballotti, president/CEO of Wyndham Hotels & Resorts in an earnings calls with analysts. “Going forward, we see Wyndham Hotels & Resorts continuing to grow as the world’s largest hotel franchise company and the provider of select-service and upscale brands to both owners and guests.”

The brand’s strategic initiatives are focused in three areas: driving rooms growth, continuing to enhance the strength of its brands and the seamless integration of La Quinta.

“First on rooms growth, we continue to expect organic room growth of 2% to 4% this year, more likely in the lower half of the range driven by 6% to 8% of international net room growth and stabilizing domestic system size,” said Ballotti. “Our total system at Sept. 30th was over 900—798,000 rooms— which represented a 13% increase from a year ago. A 3% increase excluding our 2018 acquisitions and divestitures and a 2% increase, if we further exclude our American brand, which we acquired last October.”

Wyndham is also focused on all of the drivers of rooms growth and rooms openings around the world, including adding new brands to new countries.

Ballotti also emphasized the brand’s value proposition for franchisees. “During the third quarter, we grew our direct contribution to our franchisees by 19% globally with the growth from our proprietary channels outpacing the growth in contribution from OTAs. Our increased contribution rates are being driven by strong digital and call center performance.”

Among the earnings highlights: