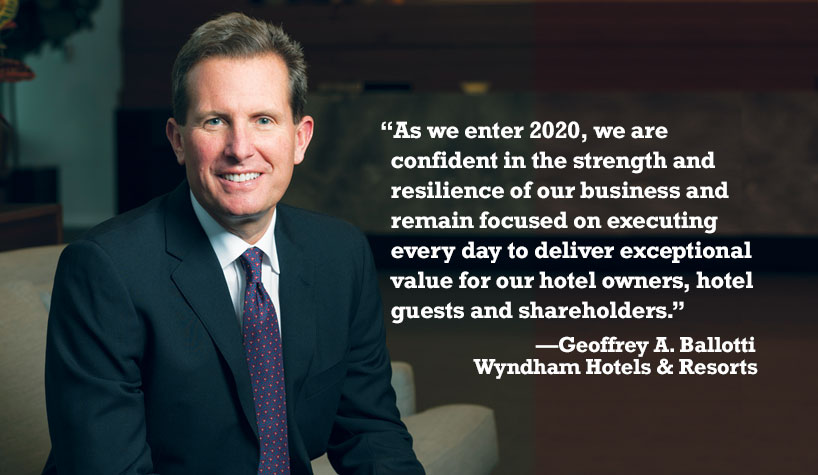 PARSIPPANY, NJ—Wyndham Hotels & Resorts has reported results for the three months and year ended Dec. 31, 2019. The company reported a revenue increase of 10% for the full year.

“We finished 2019 with another solid quarter, capping off a year in which we delivered rooms growth, earnings growth and free cash flow that were in line with our expectations despite headwinds from a soft RevPAR environment. We achieved these results through consistent execution, careful expense management and disciplined capital allocation,” said Geoffrey A. Ballotti, CEO. “As we enter 2020, we are confident in the strength and resilience of our business and remain focused on executing every day to deliver exceptional value for our hotel owners, hotel guests and shareholders.”

Revenues decreased 7% to $492 million, compared to $527 million in the fourth quarter of 2018. The decline reflects lower pass-through cost-reimbursement revenues, which are inconsequential to adjusted EBITDA, in the company’s hotel management business. Excluding cost reimbursements, revenue grew 2% reflecting growth in royalties and franchise fees, higher license fees, and an increase in marketing, reservation and loyalty fees, partially offset by lower other revenues.

Revenues increased 10% to $2,053 million, compared to $1,868 million in 2018. Results reflect $267 million of incremental revenues from La Quinta and $115 million of lower cost-reimbursement revenues in the company’s hotel management business, which have no impact on adjusted EBITDA. Excluding the impact of these items, revenues increased 3% primarily due to higher license fees, an increase in marketing, reservation and loyalty fees and higher other revenues, partially offset by a $20 million reduction to revenues related to the company’s agreement with CorePoint Lodging.