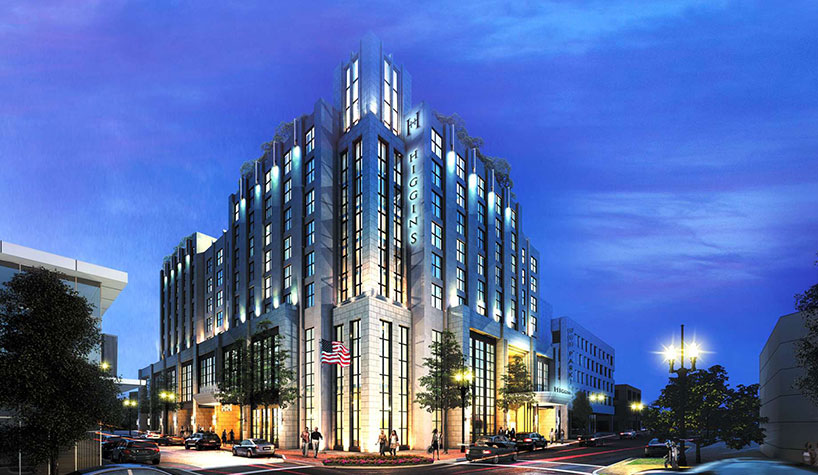 NEW ORLEANS—Demand generators are essential to the success of a hotel property. Without a reason to come to an area, even the most well-designed, experience-driven properties will have a tough time filling hotel rooms. The Higgins Hotel & Conference Center, set to open in New Orleans Arts and Warehouse District next month, has a built-in demand generator: The Curio Collection by Hilton property is owned by The National WWII Museum and sits directly across from its entrance.

The hotel—named for Andrew Higgins, the founder and owner of New Orleans-based Higgins Industries, who oversaw the production of more than 20,000 “Higgins boats” used in every major amphibious battle of World War II, including the D-Day invasion of Normandy—is an eight-story, four-star hotel designed by Florida architectural firm Nichols Brosch Wurst Wolfe & Associates. It has 230 guestrooms and specialty suites, and 14 meeting and conference spaces.

It’s a hotel that fills a need in the neighborhood. “The museum itself welcomed 780,000 guests last year,” said James B. Williams, VP, sales, The National WWII Museum. “Of those 780,000, 90% are from right outside of Louisiana, so it made sense for us to build a property where people could stay on site and actually enjoy the museum.”

A part of the educational mission of the museum, the hotel—which features a conference center totaling 18,000 sq. ft—will further the museum’s ability to collaborate with student groups. “The educational component is a major part,” Williams said. “We produce around symposiums, leadership seminars for children and adults; since we opened in 2000, we’ve had 870,000 kids and teachers.”

Previously, the museum had to coordinate with hotels around the city. “Now, we could just walk right across the street and keep the costs low for the educational mission,” he said.

The museum—a multi-building campus—also offers a two-day pass, which will further enable hotel guests to get the most out of their stays. “We expect that two-day pass to become even more popular because people can spend an afternoon there as soon as they arrive, and then go back again the next day,” said Marc Becker, director of sales & marketing, Higgins Hotel & Conference Center. “That pass is good for seven days; they don’t have to use it immediately.”

But while the museum is obviously a huge draw for guests, the site is also strategic for other reasons. The Arts and Warehouse District, a trendy area for guests on its own, is nestled between the French Quarter and the Garden District, two popular historic destinations in the city. Additionally, the hotel is located close to the New Orleans Ernest N. Morial Convention Center.

“Our proximity to the convention center is great,” Becker said. “We’re seeing interest from conventioneers who are making a little longer stay, and they come in at the beginning, possibly purchase the pass, do an afternoon, and then because they didn’t finish it, they can still pick up at the end of their stay and do half a day before they leave.”

And, he said, the Arts and Warehouse District is a great place to be. “It’s one of the really great stories happening in New Orleans,” he said, acknowledging that it’s been happening for a long time. “It’s had a real resurgence since the museum started expanding, and now we think this is going to push it over the edge with the museum’s hotel as well… Around us, there are dozens of new restaurants popping up.”

Of course, the hotel team is aware that not all guests will be World War II enthusiasts. “We do expect, because of the location three blocks from the convention center, we will have guests who end up choosing us because we’re close to the convention center and possibly because we’re a Hilton, a Curio, and who don’t necessarily have much knowledge about it being the hotel of the WWII museum,” Becker said. “What we hope to do is encourage them to think about the museum across the street as part of their stay experience.”

If you’ve visited the museum, you know that it’s an interactive experience—from the moment you enter and receive the dog tags of a real WWII vet and have the opportunity to follow their story as you move through the campus, to the exhibit walls and floors that seek to recreate the environments of the European and Pacific theaters, the museum sets a tone that enables visitors to experience history personally and authentically.

“We’ve carried that right over to the hotel where the mission of the museum has become the mission of the hotel as well, because it is a part of the museum,” Becker said. “We also aim to try and give people a bit of the experience of Americans during the war period in the feel of the hotel, the Art Deco vibe and the decor, and also the elements that have been brought over from the museum, the artifacts that are in the hotel itself, so the people can see them—everything from original photographs to the painting of Andrew Higgins, and General Patton’s piano.”

The curators worked with interior design firm Kay Lang + Associates to complement modern design with a 1940s feel, as well as a good mix of artifacts. “Our interior designer, Kay Lang + Associates, has been working with our curator team and our historians to make that story and put it together,” Williams said. “We have some items that will be permanently displayed there, but depending on the month or what is going on historically in time that’s connected to World War II, we’ll change the artifacts included into the interior design.

“When you go to a museum, you only see usually 2-3% of what’s actually on display,” he continued. “We’ve got this great vault right across the street, so we’re going to bring some of those items out and rotate them, too. Many museums will do an art tour; we’ll do a curator tour. And the one you do in January may be different than the one you do in March.”

Guests will also be able to look up information on the artifacts in the hotel’s digital compendium to learn about the historical significance.

The hotel will also incorporate history and education in other ways. Becker pointed to two of the hotel’s four F&B venues. “For example, we’re working on a series of coasters for Rosie’s on the Roof [the rooftop bar and lounge honoring Rosie the Riveter] that are pictures of various WWII nose art from the bombers—the less risqué ones. Even when you’re sitting there having a beer, you’ll have an opportunity to have a feeling or piece of the history, and then we’ll have some explanation of what that is,” he said. “And then down in Kilroy’s Bar & Lounge [named after the American wartime cartoon], we have the true shot glass, a glass that’s been blown with a .30 caliber bullet actually in it, which is an interesting feature; we’ll have the storyline there on a coaster or some other piece, because there were so many of those bullets used in WWII, most of them manufactured here in the United States for all Allied forces. So there’s a lot of little tidbits of history that make it interesting without being too overwhelming.”