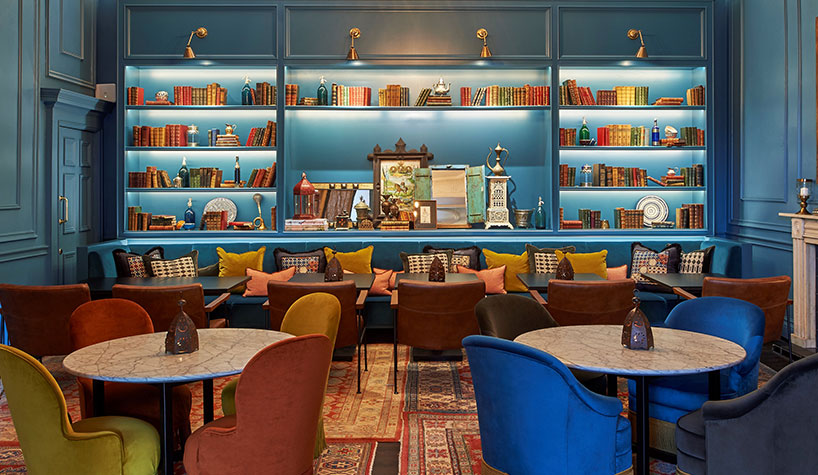 INTERNATIONAL REPORT—Kimpton arrives in Scotland, a mixed-use property in London, and a historic property is transformed into a hotel in Oslo. Here’s a closer look at new hotels across Europe:

Kimpton Hotels & Restaurants has opened its first hotel in Scotland—Kimpton Charlotte Square Hotel. The 184 rooms and 15 suites are part of seven interconnecting Georgian townhouses, which showcase the brand’s bold and playful design.

A standout concept at Kimpton Charlotte Square Hotel is No. 33, a hotel within a hotel that can be booked for exclusive use for up to 24 guests. The space includes the Townhouse Suite, three signature suites, three junior suites and six other bedrooms. The dining room and drawing room can also be used for entertaining guests.

At the heart of Kimpton Charlotte Square Hotel is The Garden, a space full of natural light where guests can sit back and relax for a drink or a meal. Destination restaurant BABA is inspired by the flavors of the Levant and offers curated mezze dishes. BABA’s unique cocktail menu offers an original twist on the classics, with options such as a Sesamartini or Olive Oil Negroni.

Scheduled to open in May, The Stratford Hotel and Lofts prepare to signal a new era of hotel living in the British capital, uniting short-term hotel guests and long-term Londoners under one roof with the 42-story The Stratford in east London’s Queen Elizabeth Park.

Designed by SOM, the architects behind the world’s notable skyscrapers, including the Burj Khalifa and One World Trade Centre, the double-cantilevered tower has expansive living spaces, three sky gardens, two restaurants and a design hotel.

Occupying the first six floors is The Stratford, a 145-room luxury hotel with interiors by Space Copenhagen, the designers behind the NOMA and 11 Howard in New York. The seventh floor is given over to Allegra, a restaurant by former Chiltern Firehouse head chef, Patrick Powell.

The Hotel de la Ville, a Rocco Forte hotel, is set to open on May 23. Architect Tommaso Ziffer has collaborated with Rocco Forte Hotels Director of Design Olga Polizzi in bringing to life the aesthetics and cultural sentiments of the 18th and 19th century Grand Tour of Europe in a contemporary key.

Elsewhere, in the southern region of Italy, Rocco Forte’s Masseria Torre Maizza is a renovated 16th century farmhouse set among olive trees and ivy. It is slated to open on May 1. Accommodations include 40 rooms and suites renovated by Rocco Forte Hotels Director of Design Olga Polizzi, having a keen eye for blending elegant and rustic tones.

Now, exactly a century later, the grand Neo-Baroque pile has been spruced up by local firm Kritt Architects who, informed by the building’s decorative maritime trimmings, vaulted ceilings, ornamental moldings and grand staircases, have carved out 122 rooms and suites and public spaces that include four restaurants and bars, and Vista – The Heritage Room, a library and social space, where Amerikalinjen’s stories are shared.

El Llorenç in Palma de Mallorca to Open This Summer

El Llorenç Parc de la Mar is set in the heart of La Calatrava, one of the oldest neighborhoods in Palma, Mallorca, is set to open this summer. Accommodations include 33 guestrooms, an infinity pool on the multi-terraced rooftop and a cocktail bar.

On-property features include Balinese style sunbeds and views of Palma Bay, the Cathedral and charming rooftops of the old town. Wellness facilities have spa treatments from the luxury Spanish brand Natura Bissé and an indoor pool. Dining options include DINS Santi Taura, a new destination restaurant, and restaurant TANNUR for breakfast, lunch and dinner in a bistro setting.

Wyndham adds 12 resorts in Europe Wyndham Hotels & Resorts and CLC World Resorts & Hotels, one of Europe’s largest independent resort…
Hilton plots growth in Europe and U.K. With 217 properties and more than 35,000 rooms in development, Hilton is expected to increase its…
WorldHotels adds four hotels in Europe Three properties in the U.K., one in Italy
Hyatt expanding footprint across Europe Affiliates of Hyatt Hotels Corporation have entered into six new management and franchise agreements for hotels…