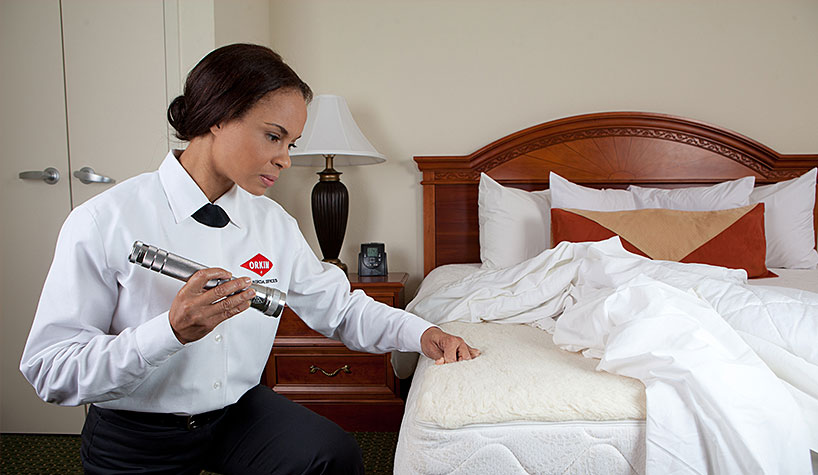 NATIONAL REPORT—As hotels are beginning to reopen their properties—whether the entire facilities or sections that were closed off—as travel begins to increase, owners have a number of things to take care of. One of them is pest control.

With decreased activity, pests have had an increased ability to roam through hotels that have been largely empty. “Without activity, there is nothing that would make them really hidden in their harborage areas,” said Frank Meek, manager, technical services, Rollins, parent company of Orkin. “That lack of activity increases their movement, increases their moving around questing for food. If they find a good food source with water, they are going to potentially grow in numbers because they still have all of their resources and they don’t have people to scare them back into their harborage, their hiding areas. We know that certain things like rodents are looking for new areas to live and new resources, because a lot of things they depend on are just not there anymore—like the abundance of food in the trash cans. That forces them to move into new areas looking basically for survival.”

Meek said that if the exterior of the hotel building was not maintained during closure, it is important to do so immediately. “The concern for us at the start of this was that if places are shutting down, if the exterior is not maintained, it creates bridges for insects and pests to come in places that they don’t normally travel through,” he said. “If trees or shrubs are overgrown on the outside, all of that needs to be trimmed back and they need to make the exterior look good again if it was allowed to grow. Cut any weeds up against the building. All that needs to be cleared and maintained back to where it was before.”

When a date is set for the opening, it is important to get activity going in the areas that have been closed. “Before you start making spaces available to guests and opening up areas, have staff go through the areas, go through the rooms, several times, several days before you start renting those rooms back out because that activity will stir up what is in there,” he said. “You want a staff person to find that cockroach, not a paying guest.”

As hotels come up with new health and safety protocols, an inspection by an expert is essential. “An inspection with the trained eyes of an experienced pest controller who can come in and see what the conditions are is important,” said Meek. “Not necessarily a service, because using chemicals is not proper. Pesticides are used as they are needed, not as a routine. You don’t want to have someone come in and spray a bunch of stuff. If there are pests there and they are behaving themselves and staying put, that is going to move them and get them out running before your guests come out. You want someone to come in and inspect who knows the issues and service it as needed based on what they find and see. Look, assess, evaluate and do what is needed—that’s the way to go.”

What to Know Before Reopening Your Fitness Center NATIONAL REPORT—The hotel fitness center has become an important part of a traveler’s stay. Guests want…
Mitigating Bed Bug Risks Before Welcoming Back Guests With hotels around the country welcoming back guests, and travel and tourism beginning to return, hotels…
PurpleCloud Launches Free Reopening Guide NATIONAL REPORT—PurpleCloud Technologies is making an online COVID-19 reopening guide available for free. “As we move…
HB Exclusive: CHLA's Bijal Patel Discusses California Hotels Reopening to… SACRAMENTO—Many California properties are reopening their doors to leisure travelers today for the first time since…