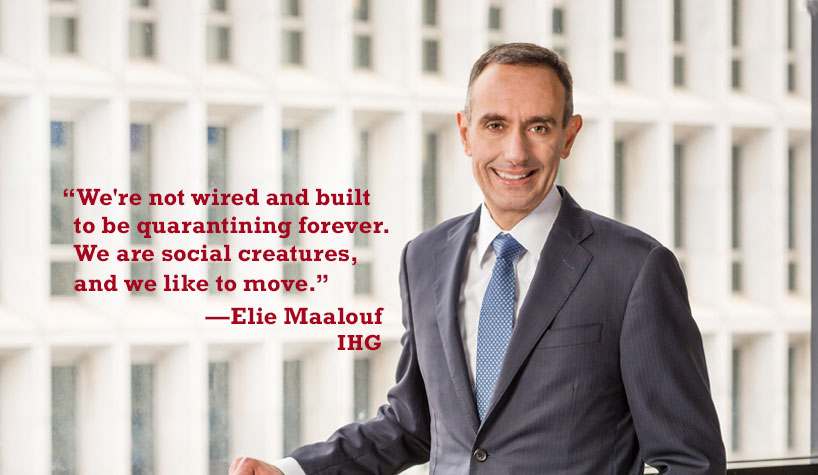 ATLANTA—In its first-quarter report, IHG said that 90% of its hotels in the Americas were open by the end of April. According to Elie Maalouf, CEO, Americas, IHG, based here, “Since then, we’ve been reopening them at a steadier pace. We’re well into the single digits of hotels closed in the Americas and the U.S., and I expect the vast majority of those to open in the near future.”

Maalouf, who connected virtually with Hotel Business to discuss IHG Americas’ recovery from the COVID-19 pandemic, among other topics, pointed out some of the efforts his company executed to help during the height of the crisis.

“Right from the beginning, we acted quickly to protect our colleagues, our guests and our owners, and help our communities,” he said. “We were first to put out PPE for our colleagues and our managed hotels. We worked very closely to bring relief to our owners by relaxing some standards, forgoing some fees for some period of time, deferring some payments and really working on the government side to bring relief from the CARES Act, the Payment Protection Program (PPP) and Economic Injury Disaster Loans (EIDL) from the Small Business Association (SBA).”

While he believes the recovery stage has begun, he pointed out that we must “recognize that we’re still clocking about 20,000 infections a day and, sadly, a thousand deaths a day, according to the Johns Hopkins site,” adding, “I think, as an industry, it’s past the bottom. We bottomed out in the low 20s in occupancy sometime in April, and we’ve been steadily picking up since. At IHG, we’ve even seen the last few weekends—not just Memorial Day weekend, but weekends before and after—really high, almost full occupancies in some resort locations in Florida, Southern California and others.”

He continued, “What does that say? I think it says, first, it’s good for the industry and our hotel owners and colleagues, but it’s also a sign of, after weeks of lockdown, quarantine and sequestration in our homes, how much we crave traveling, getting out and being places. We’re not wired and built to be quarantining forever. We are social creatures, and we like to move. We like the energy. We like the vitality. We’ve been suppressed from that for some time, and we have to still do it in a very diligent and safe way, but that’s what people want to do.”

The first step in earning consumers’ trust in the industry for many hotel companies, including IHG, was to implement upgraded cleanliness and safety standards.

“In 2015, we introduced IHG Way of Clean, which was developed with Ecolab and Diversey, and covered our hotels’ rooms and public spaces with hospital-grade disinfectants that eliminate viruses, bacteria and other microbes,” said Maalouf. “But, clearly being in a global pandemic that we haven’t seen in a century, we wanted to go a step above to bring that confidence to leisure and business travelers. So, we have required all of our hotels to follow these steps: social-distancing signage and floor markers; protective barriers at the front desk; hand-sanitizer stations in high-traffic areas and in colleague spaces; masks worn by hotel colleagues at all times; and gloves for certain activities like food preparation, food service, luggage handling and housekeeping. For stay-over cleaning, we’ll do it only upon guest request.”

He continued, “We’re also rolling out mobile check-in and checkout through our app, and we’re requiring health screenings for all colleagues before each shift—not just temperature but a series of symptom questions. We’ll have Clean Champions required in every hotel. It’s all underpinned by our IHG Clean Promise, which means that you will have a clean room to your satisfaction or else we’ll make it right.”

The company has also formed a partnership with the Cleveland Clinic to help make sure IHG properties are keeping their guests’ health top of mind. “They are leaders in medicine and science and employ more than 60,000 people across over a dozen medical facilities,” the CEO pointed out. “So they know something about keeping people safe.”

The discussion turned to the protests against police brutality on African Americans that are occurring in major cities around the county, and Maalouf said, ”We’ve taken action with a show of support for the victims of this injustice. Peaceful protest is everybody’s right, and we encourage it, but unfortunately sometimes it goes in a different direction.” He added that there “hasn’t been any systemic impact to our properties. We did sustain the usual broken windows, graffiti and things like that in a few places, but our focus has been on protecting our colleagues and making them feel safe.”

Ready to Travel
Changing the subject back to the recovery of the industry, the executive pointed out that consumers’ desire to travel and take vacations has not gone away, “and I don’t think it will ever go away. In a few years, whether it’s 2022 or 2023, life will be mostly what it was in 2019. So we don’t have to recreate that desire. It’s there, but has been suppressed by medical concerns. We’re seeing it as the lockdowns and restrictions are lifting. People are moving. and occupancies are rising, especially in leisure locations. We’re seeing companies start to allow their employees to travel more. We’re seeing airlines bring back a few flights.”

When they do come, they will first turn to hotels by familiar brands. “What we’ve seen at large throughout this pandemic is a drive from consumers toward trusted brands, whether it’s in food, products or transportation,” Maalouf said.  “A lot of things they started buying were now much more branded because they had trust in that brand. When you feel threatened from a health point of view by something you can’t even see, trust emerges to the top. Our brands have always had the deep trust of travelers around the world. We think that trust—plus that cleanliness and safety standards—is going to make people feel more comfortable to travel.”

This also means that guests must also follow guidelines when traveling. “Now, we have to do it responsibly from a traveler point of view and from an operator point of view, so that we don’t end up in a second spike, which then sends people scurrying back,” said the CEO. “I think that there’s an accountability on both the traveler and operator to follow certain guidance from the medical authorities, and when we both do that, we’re both going to be able to enjoy things we want to enjoy and do the business we want to do in a safe manner.”

During the NYU CEO Check-In Panel last week, IHG CEO Keith Barr mentioned that U.S. hotels in the last month or so were seeing high occupancies on Tuesdays and Wednesdays. Maalouf noted that it has come from businesses that have “needed to move.”

“The manufacturing sector in the U.S. continues to go forward; so has the agriculture and the medical sectors,” he said. “There are a lot of essential sectors that never closed, and somebody’s got to support them. We’re deeply distributed in the U.S., and the Americas overall, in mostly drive-to markets.”

From a development standpoint, Maalouf noted that, globally, IHG had more than 100 signings in the first quarter, adding, “Undeniably, it’s been slower since then, but it’s continued. Our construction pipeline has continued; our ground breaks of new construction every month since March has been pleasing. We’ve been very competitive in our share of new deals that have occurred. Just in the first quarter alone, 20 of the deals that we did in the Americas were for our new Avid and Atwell brands, which shows people are still confident and betting on this industry, and investing in IHG brands.”

Although he wouldn’t provide a prediction, as per company guidelines, as to when the industry would be back to 2019 levels, Maalouf, like thousands of hoteliers across the U.S., hopes “it’s sooner rather than later.”

For more insight from C-suite executives, check out our virtual panel discussion here.

HB Exclusive: Industry Leaders Strike Optimistic Tone in 'View from the C-Suite'   Watch Now NEW YORK—Industry leaders were optimistic about the recovery during the "View from the…
Hotel Business to Host View from the C-Suite: Brand Leaders Discuss the Road to… Watch Now NEW YORK—Join Hotel Business, InspireDesign and NEXT Events on Tuesday, May 26, at 2…
Jack P. DeBoer, extended-stay and all-suite hotel pioneer, passes away Jack P. DeBoer, who designed and built the first Residence Inn in 1975, has passed away.…
Green Book Extra: Brands Caiafa, Pacious and Quinn talk 2021 challenges