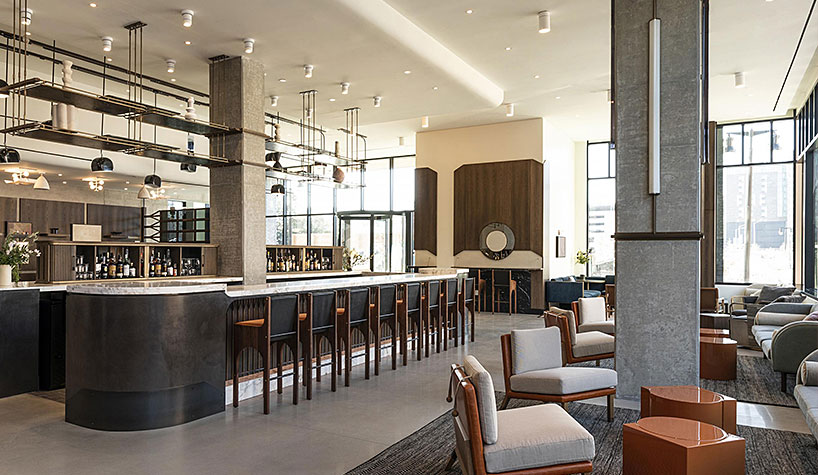 WASHINGTON—The nation’s capital has seen the debut of a few hotels in recent weeks, including Thompson Hotels’ arrival in the area. Here’s a look.

Thompson Washington D.C., the lifestyle brand’s ﬁrst property in the nation’s capital, is now open. Located in the Navy Yard neighborhood, the new hotel has 225 guestrooms and suites, along with restaurant and bar concepts by Danny Meyer’s Union Square Hospitality Group.

The newly built 11-story property, owned and operated by Pivot Hotels & Resorts, is designed as a sophisticated lifestyle hotel with a reﬁned edge, with architecture by New York-based Studios Architecture and interiors by Parts and Labor Design. The hotel’s deeply textured facade and large industrial-inspired windows were designed to embody the historic industrial language of the neighborhood, The Yards, a 42-acre waterfront development at the center of Capitol Riverfront’s Navy Yard neighborhood.

As the ﬁrst lifestyle hotel in the growing mixed-used development, Thompson Washington D.C. is designed to be a social anchor in The Yards community, joining dozens of specialty retailers, restaurants, high-end residences and cultural attractions. Situated on DC’s scenic riverfront, outdoor parks such as the Anacostia Riverwalk Trail and The Yards Park are all nearby.

The hotel’s interiors were inspired by the Thompson brand’s signature mid-century modern aesthetic and the area’s notable Navy Yard, incorporating industrial patterns and textures found in the neighborhood’s historic naval structures. The hotel’s guestrooms, including 17 suites, have ﬂoor-to-ceiling windows and views of the Anacostia River and Nationals Park.

Two Thompson Suites also have outdoor terraces with views of the Washington Navy Yard. Each guestroom has custom headboards upholstered in a mélange wool boucle from Holland complemented by sherry and plume-colored leather framed in a dark oak.

The AC Hotel by Marriott Washington DC Downtown is now open. Located in the Golden Triangle Business Improvement District, the 219-room hotel is the first ground-up, new-build hotel in the area since 1971. The design of the hotel reflects the city from the urban feel of the facade to the artwork in the public areas.

OTO Development, based in Spartanburg, SC, developed and will manage the new hotel. The company contracted with MaterialDriven to design, develop and install various artwork, including a piece titled River-flow, a paper and optic fiber chandelier, designed by Anke Neumann of Lichtpapier, that represents the nearby Potomac River in the lounge. Another, titled Washington DC Skyline, is a metallic glazed ceramic tile work by the Giles Miller Studio at the registration desk. Finally, a natural wool felt piece in the entrance hall, called Vaulted, represents the architecture of the Metro Center station’s vaulted ceiling.

The AC Hotel by Marriott Washington DC Downtown is the fifth AC Hotel in OTO Development’s portfolio. It is located near the White House, DuPont Circle, George Washington University and Hospital, and the K St. corridor, and within a short walk to Georgetown.

The 112-suite Residence Inn Upper Marlboro Joint Base Andrews recently opened in Capitol Heights, MD. The all-suite will operate as a Marriott franchise, owned and managed by Tharaldson Hospitality Management of Fargo, ND.