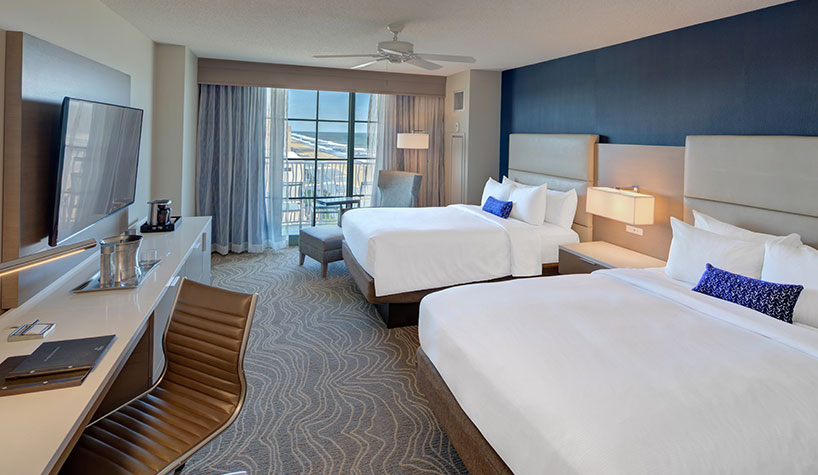 NATIONAL REPORT—Hotels and resorts around the U.S. are sprucing up their offerings with renovations designed to lure today’s traveler with a stylish haven. Here’s a look at what’s new:

Hilton Virginia Beach Oceanfront has completed a $13-million renovation of its 289 guestrooms and suites. The transformation comes as the hotel enters its second decade of existence on the boardwalk of Virginia Beach, VA.

The final phase of the renovation was the hotel’s superior guestrooms, which make up the majority of the hotel’s inventory. Work on those rooms began in 2017 and was completed during the first quarter of this year.

Inspired by its oceanfront location, the hotel’s new superior guestroom design has a soothing, yet vibrant color palette of blues, creams and gray hues. With either a Hilton Serenity king bed or two Hilton Serenity double beds, these rooms have contemporary style furniture and accent pieces.

In Dallas, the Hotel Crescent Court has completed a $33-million overhaul of its lobby, guestrooms, suites, corridors, spa and fitness center. It is the first major renovation since the hotel’s inception in 1986.

The lobby offers guest pods, with various seating layouts sculpted to create meandering pathways encouraging flexible socialization, according to the firm. Designed to be a focal point, Beau Nash is the new champagne bar and cocktail lounge.

The full restoration of the 186 guestrooms and 40 suites—an addition of nine suites from the original—pays homage to the vision of Caroline Rose Hunt and the original architect and Pritzker Prize-winner, Philip Johnson, while incorporating modern enhancements such as new bathrooms and vanity areas.

“We have invested more than $52,000 per key into the renovation. It clearly shows our continued commitment to the Hilton Garden Inn brand and the Savannah Historic District market,” said Whip Triplett, EVP of North Point Hospitality. “Our goal is to deliver brand-defining hotels, and I believe we have done just that with this renovation.”

The Hyatt Regency Schaumburg revealed its completed renovation of all guestrooms and over 28,000 sq. ft. of event space. The Hyatt is adjacent to the Woodfield Mall, the fifth largest shopping district in the U.S.