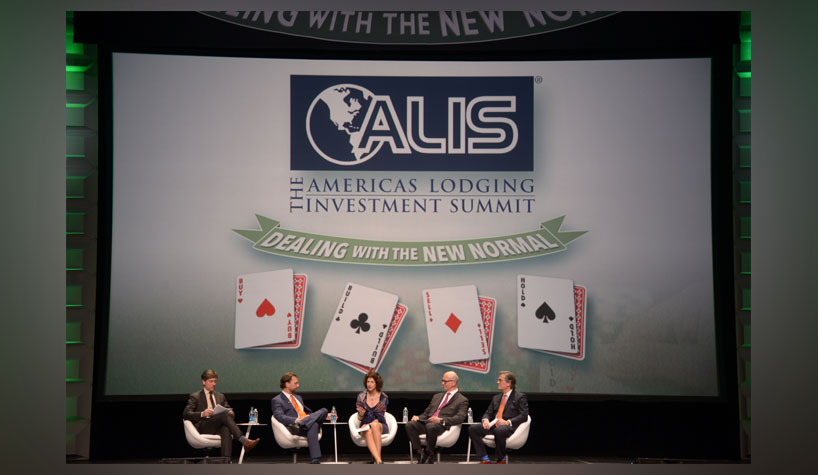 LOS ANGELES—This year’s ALIS Conference included a session entitled “The Numbers—What Are We Dealing With & Where Are We Headed?” Leading economic researchers took a look at the industry and presented their findings. Here is a look at what they said.

According to Carter Wilson, VP of consulting and analytics at STR, 2017 was a great year for the hotel economy. “The hotel economy is very dependent on the overall economy,” he said. “Right now, all of the indicators are very solid. We are looking at low unemployment, strong corporate earnings and moderate inflation levels, so it all played a key in 2017’s performance in the industry. Demand did outpace our estimate in 2017; a lot of that was due to the third and fourth quarters with the impact of the hurricanes and the wildfires. The industry continues to perform at all-time record levels according to every single metric.”

Early numbers suggested that demand outpaced supply, with final occupancy rates for 2017 expected to be about 66% for the year.

Total room revenue rose about 5%, and RevPAR continues to grow, with 93 consecutive months of growth.

Despite these positive indicators, he did have a few cautionary notes. “The number of submarkets experiencing RevPAR declines is on the rise,” he said. “Right now, about 26% of all submarkets in the U.S. are seeing declining RevPAR, and that is an increase from the year before.”

In 2017, the U.S. hotel industry had nearly twice as much business through its brand.com websites at 22.6%, compared to 13.6% booked through online travel agencies (OTAs). In spite of this difference, hotels are still challenged in managing costs of sales, with OTA commissions rising at three times the rate of guest paid revenue and twice the growth of loyalty costs, according to Estis Green.

The U.S. guest-paid revenue of 2017 is estimated at $155.2 billion. The hotels only retained $130 billion in net revenue, resulting in a total spend of over $25 billion to acquire their customers before they even set foot on the property. Revenue capture was 83.8%, which is down from 84.7% in 2015. This drop in revenue capture in just a two-year span cost U.S. hotels a $1.7 billion dip to their bottom line.

Book-direct campaigns launched in 2016 accelerated brand.com and slowed OTA growth, according to Estis  Green, who noted that the more important shift was a spike in loyalty membership. This strategy was successful, as loyalty contributions rose almost 10% over the last two years, according to Kalibri Labs’ findings. Using industry averages, when comparing the results of three visits by a loyalty member versus finding three customers through an OTA, a hotel will end up net positive $73, reflecting the higher value of a recurring customer base.

Estis Green also provided an insight into Airbnb’s market penetration across major U.S. markets, which ranged from 7-10%. The penetration grew at a steady pace in the three years examined in the study. In looking at Airbnb’s penetration in Los Angeles, the site of the conference, the brand had a 9% rate. The length of stay had an effect on the brand’s penetration, with longer stays resulting in more.

Mark Wynne Smith, global CEO of Hotels & Hospitality for JLL, noted that 2017’s hotel transaction volume of $24 billion was down from 2016, an 18% change. Smith had several reasons for the decrease. “Hotel owners opted to refinance over sale,” he said. “The second thing was that fewer large transactions came to the market during 2017. Lastly, as we are in an extended cycle, although we have seen transaction take less time than 2016, there was no rush to close, which is what we often experience in the early years in a cycle.”

Hotel values are still around record highs nationally. “If we are comparing 2017 over 2016, there is a slight uptick relative to the previous year,” he said.

He reported that the sentiments around cap rates is fairly stable. “Interestingly, despite the increase around base rates, the slowing of RevPAR growth, there does seem to be an expectation that cap rates might compress on full-service transactions,” he said.

Smith pointed out that two predictions made for 2017 were accurate. “We expected there to be a resurgence of domestic investors and that has certainly taken hold,” he said. “The second headline was the return of the publicly traded REITs to the acquisition trail. The recent trend that we all experienced of REITs preferring to buy back stock and buy assets has now reversed. We have certainly seen a more aggressive churn of portfolios and publicly traded REITs acquiring assets, which are generally accreted. REITs purchasing volume now comprises 26% of the buy.”

Comparing 2016 and 2017 on what offshore regions provided the investment, Asia saw a decrease from 83% to 43%. Increases came from both Europe and Canada. Canada had a 3% share in 2016 and rose to 23% in 2017, while Europe increased to 28% from 9%. “One of the new aggressive investors, [Canadian firm] AHIP (American Hotel Income Properties), acquired three separate portfolios through the year, one of which was a $407-million deal of 18 hotels across the East Coast,” said Smith. “Much of the European growth has been driven by the German open-ended funds, who now have a foothold in the U.S. hotel investment market.”

Mark Woodworth, senior managing director with CBRE Hotels, offered a look at 2017 and predictions for the new year.

While occupancy was slightly better than anticipated in 2017, pricing did not increase to the level that history said it should have given the strength of occupancy. “In our forecast for 2018, not surprisingly, demand continues to look like it is going to be very, very strong,” he said. “That should really help on the occupancy side. Pricing should be a little better than what we saw in 2017, but still not where history says it should be.”

Woodworth took a look at two factors that could cause the end of the positive cycle for the industry: overbuilding and an asset price bubble. “Using data from STR, for a year now, the number of rooms has remained very level—not quite 200,000 a year ago, and it is now down to 180,000,” he said. “It sure looks like we have seen the peak of that in this current cycle. With respect to a bubble, arguably, there is one area of the economy that there may be something going on, that being the stock market. Where we are today is certainly elevated, but well below some previous peaks that we have seen.”

International travelers to the U.S. have dipped from every country except for Canada. “As the Canadian dollar has strengthened, what we have seen is a bounceback over the last couple of years in the level of Canadian visitation,” said Woodworth.

Another area is labor costs. “Upwards of 40% of every dollar spent in running a hotel is associated with labor and related costs,” he said. “The number of job openings in 2017 was 854,000, an all-time high.”

There has also been weak ADR growth. “There are a handful of reasons for this,” said Woodworth. “Airbnb’s growth, while it continues to increase, is not nearly at the rate we have seen in previous years. In those cities where we see greater volume of sharing economy units, and a greater disparity in the average price of those units relative to the average price of a hotel room in that destination, the more relevant is this sharing economy question.“

He continued, “In real terms, ADR change clearly has an inverse relationship to the level of supply growth.”