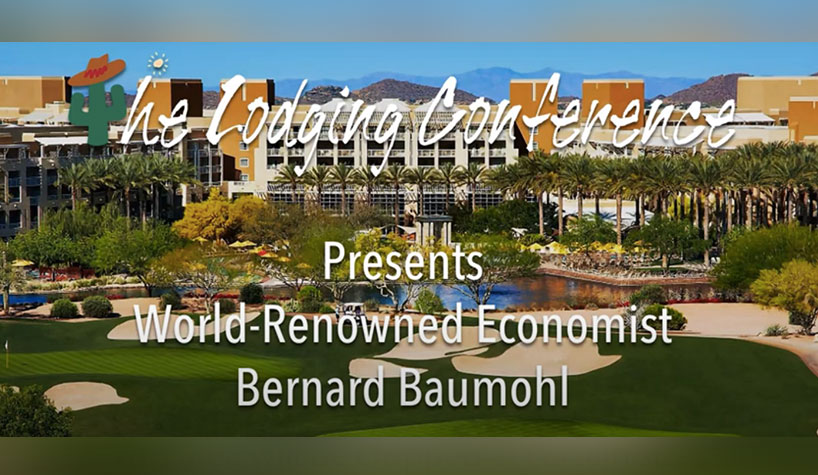 NATIONAL REPORT—While The Lodging Conference was postponed this year due to COVID-19, the long-running conference presented a virtual event with Bernard Baumohl, chief global economist, The Economic Outlook Group LLC. Baumohl has been a regular speaker at The Lodging Conference since 1995 and is always selected by attendees as its top presenter. During the presentation, Baumohl gave his take on the current economic environment and the critical factors at play, including COVID-19, the fiscal stimulus package and the upcoming presidential election.

“We have to brace ourselves for what will unfold in the next several weeks and months in terms of the economy, the social environment and, certainly, the upcoming presidential election,” Baumohl said.

COVID-19
“The course of the virus is critical because we cannot fix the economy without first fixing the health crisis,” Baumohl said. “I know some people are a bit more upbeat these days because they’ve seen some positive economic reports, certainly with respect to the housing market, we’ve seen better numbers on retail sales and there’s obviously been for some industries a rebound in hiring. But, we have to be very careful here about having a false sense of security; an economic rebound is not the same thing as an economic recovery. It doesn’t tell us that we’re on a sustainable economic recovery course right now because the virus is still calling the shots and will until there is a vaccine.”

“Scenario one means you’ll still see a high rate of infection and fatalities into the fall, and it’s going to be compounded by the existence of the flu, which has in many respects similar symptoms as the coronavirus,” he said. “But if we are able to get a vaccine in the first half of 2021, that’s our most realistic optimistic scenario.

“Scenario two, a bit less optimistic, obviously will result in far more casualties, more business failures, more people being laid off,” he continued. “Then, the probability of a recession is about 50% that we’ll have one in 2021.”

He added, “Scenario three is not meant to scare anybody, but it’s something we cannot dismiss: We have to be prepared for it. We cannot rule out the possibility that we’re going to have to live with this virus for a longer period of time and that is because perhaps a vaccine could prove elusive. After all, we’ve never had a vaccine for a coronavirus—not for SARS or MERS. It may take time. And for some viruses, there’s no vaccine. There’s no vaccine for HIV, for malaria, for tuberculosis for adults. If we do have that third scenario, then the economy is pretty much condemned to feeble growth for quite some time until there are lots of therapeutics out there or there’s herd immunity.”

For the purposes of the forecast he presented, scenario one was chosen.

Fiscal Stimulus Package
With regard to the stimulus package, Baumohl said, “Both sides are obviously still far apart—so far apart, in fact, that they were not even able to pass a skinny package in the Senate. And yet, this fiscal package is absolutely crucial to keep the economy going. We are in a race against time. We need this financial bridge as a lifeline for businesses to keep them financially afloat and also to keep households whole. This package is crucial.”

However, he is not optimistic that one will be passed before the presidential election. “Are we going to be seeing a package passed before the election? I’m beginning to have my doubts. Congress will have a recess beginning in October, return after Election Day, so I’m afraid we’re going to have to make the assumption that there is no emergency package to be passed before the election,” he said, noting that the divide isn’t just between Democrats and Republicans. “There is a lot of disagreement even within the Republican party as to how much should be spent. Treasury Secretary Steve Mnuchin said the administration is perfectly satisfied having a package of $1.5 trillion, but there are a lot of other Republicans who want to see a much smaller package, so there’s that disagreement even within the Republican party.”

Baumohl laid out why a package is so crucial. “State and local governments do need to have some emergency funding right now. Their coffers are decimated because of the coronavirus, tax revenues have plummeted, and 49 out of 50 states have a balanced budget amendment, so if they don’t get any fresh funding, they will have no choice but to slash payrolls—and that means cutting the payrolls of teachers, nurses, fire and police, less spending on public education,” he said. “The second critical area is the paycheck protection program. A lot of small and midsize companies relied on this program to bring back employees, to keep them working, and now, a lot of those funds have been depleted. I’m afraid more and more companies who relied on the program in the past are going to have to start to lay off those workers.”

The third key point is the enhanced unemployment benefits, which expired at the end of July. “They were offering people who were collecting unemployment an additional $600 a week. I don’t expect the new package to have that amount, but I still think it is critical that there is a significant additional amount above what the state provides so that people can pay for food and shelter, so that they can also make their debt payments and go out and buy essentials,” he said. “I think the economy is going to hit an air pocket if we don’t get that enhanced unemployment benefit.”

And having that confident consumer is necessary to a healthy economy. “Consumers are the bedrock of the economy,” he said. “Consumers are under stress and I expect we will see a slowdown in the growth of consumer spending in the fourth quarter and into the first quarter of next year.”

He added, “There are some people who keep telling me, ‘It’s not all that bad for households; after all, look at the stock market.’ My answer is that despite all the talk regarding the euphoria people have over the stock market, the majority of Americans do not have skin in the game.”

Baumohl noted that this uncertainty is reflected in the business outlook with corporate bankruptcies on track to be the most in 2020 that we’ve seen in a decade, and manufacturing output, while it has increased, not bringing back the workers. “We’re still about 800,000 fewer workers on the job than there were before the start of the pandemic,” he said.

Baumohl pointed to the airline industry. “In terms of air travel, it’s still about one-third of what it was prior to the pandemic. Airlines are burning through lots of cash—$6 billion per month or $200 million per day—and they’ve announced recent layoffs,” he said. “When you see layoffs being announced now, it’s because these companies have come to the conclusion that the situation is not going to improve anytime soon. It is an acceptance that the coronavirus will continue to hang over the head of the economy for quite some time.”

Presidential Election
How will the presidential election affect the economy?

“This year, we’re looking at the economy contracting 4.9%,” he said, noting that one key factor for the years ahead will be the election. If Joe Biden wins the presidential election, he predicts economic growth will be 3.4% in 2021 and 4.3% in 2022. Should President Trump win the election, he predicts slower growth—2.2% in 2021 and 2.6% in 2022. Both of these forecasts are based on the assumption that each president’s party would also control both houses of Congress.

Baumohl laid out the reasons why. “I’m expecting the first and second quarter of next year to be fairly weak. If it turns out that the infection rates and fatality rates are quite high, Biden has said that he is willing to introduce a modified shutdown if the numbers look bad and if the experts in the medical community recommend it,” he said. “This will have a depressing effect on the economy, but maybe not as bad as you would expect because at the same time, with a Democratic-controlled Senate and House, we’re expecting Congress to pass a much more generous fiscal stimulus program to provide that lifeline for businesses and households.”

He also predicts that Biden would reappoint Jerome Powell as head of the Federal Reserve when his term expires in February 2022, a move that would calm U.S. and global financial markets, and a Biden administration would be focused on increasing spending on infrastructure, climate protection, education and expanded healthcare. He also expects Biden to reengage with international organizations like CPTPP, WHO, NATO, WTO and the Paris Climate Accord.

“With respect to his policy toward China, I don’t see that much of a difference between Biden and Trump,” he said. “Biden and the Democratic party are going to be just as tough against China as Trump was, but the big difference is the strategy that the Biden administration will pursue. Trump went about going after China unilaterally, and I don’t think that created much progress. Instead, I’m expecting that Biden will find more leverage by seeking a coalition of countries that trade with China to go up against Beijing to get them to put even more pressure that way to get China to change  its behavior.

“When you take all of these factors into consideration, there’s less chance of a disruption in the supply chain or in trade flows,” he said. “I think there’s less uncertainty about U.S. domestic policy and on U.S. foreign policy, and that provides a more conducive backdrop to business capital spending and to hiring. Those are the primary reasons why I see growth at the levels you see. That is faster than we see if President Trump wins a second term.”

Baumohl laid out the reasons why the forecast for a Trump win is slower economic growth. “In a second term, President Trump is not going to feel any political pressures. He’s going to be focused on forging his legacy on the economy, on trade and deregulation,” he said.

“First, he’s going to be lowering taxes, most likely by permanently lowering the payroll tax… he’s going to dramatically increase spending on infrastructure, on border security and on defense,” Baumohl said.

And, he noted, the White House has said one if its other top priorities in a second term is reducing the deficit. “If you take them at their word, the only plausible target that will help them achieve that goal is by going after social security benefits, Medicare and Medicaid,” he said. “If you do that, that can have a depressing effect on the economy.”

Baumohl also doesn’t expect Trump to reappoint Powell as head of the Fed. “More likely, he’d want to have someone whose recommendations and policies will coincide more with the administration in their economic goals,” he said. “I expect President Trump will put in place someone who will actually entertain the possibility of a negative federal funds rate, and that is something Jerome Powell doesn’t see the effectiveness of, and certainly no one on the FOMC right now favors a negative federal funds rate—but President Trump may want to have somebody more sympathetic to that policy.”

He continued, “In addition to that, with a second term, President Trump will be convinced he’s got a mandate to really intensify the trade pressure he can apply to China, so I expect trade tensions will intensify with respect to China. And, President Trump has said himself in the second term he will possibly ramp up new tariffs and put up new barriers to trade with respect to Europe as well.”

“When you put all of this together, it does seem like there will be more concerns and disruptions on supply chains, on trade flows, more worries about geopolitical hot spots… and that is a backdrop that is not conducive to ramping up business capital spending,” he said.