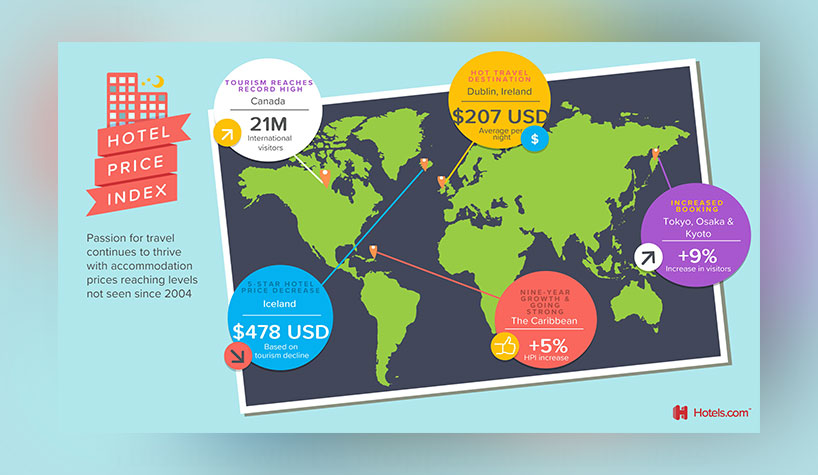 DALLAS—There’s no sign of a slowdown for the global travel industry, according to the latest Hotel Price Index (HPI) from Hotels.com. The prices travelers paid for overnight accommodation rose 3% globally in 2018, with every regional index, except the Pacific, receiving a boost.

The growth in travel comes despite uncertainty such as Brexit, the wildfires in California, drought in South Africa and earthquakes in Japan. Travelers also showed resilience and renewed confidence in destinations touched by unrest like Paris, Egypt and Turkey, as well as regions experiencing currency fluctuations like South America, and areas in North America affected by natural disaster.

A few of the study’s key findings:

The Caribbean HPI continues its nine-year growth trajectory, setting an all-time high by rising eight points to 151, an increase of 5%, and retaining its perception as an aspirational holiday destination.

The Asia HPI retains its position as the lowest regional HPI at 102, showing little growth since 2013 and continuing to offer incredible value to travelers.

Although recording no change in its HPI of 126 since 2017, the Pacific still has the third-highest regional index, behind the Caribbean and Latin America, as a premium holiday destination, particularly for families.

Despite the impact of the California wildfires and two major hurricanes hitting the Carolinas and Florida, the U.S. hotel industry saw growth among domestic travelers with average prices rising in 27 of the top 50 destinations.

Las Vegas once again topped the list of most popular domestic destinations for American travelers, with New York coming in second. Orlando, FL, San Diego and Chicago rounded out the top five, respectively.

Overseas guests paid 2% more for their hotel accommodations in the U.S. per night than in 2017, as averages rose in 33 of the top 50 destinations for international travelers.

2018 was the best year on record for Canadian tourism, with international travelers surpassing 21 million (21.13 million) for the first time ever. A record-breaking 14.44 million U.S. travelers visited Canada in 2018, the highest recorded since 2004.

Toronto topped the most popular Canadian destinations for international travelers, with Vancouver coming in second. Montreal, Niagara Falls and Calgary rounded out the top five most popular respectively.

Destinations on the Rise

Among the destinations that rose to the top for American and Canadian travelers in 2018 were Ireland, Japan and Turkey.

Flexible visa requirements in some markets and a visit from Pope Francis in August helped Ireland bring in more than 10 million travelers in 2018, a record high. American travelers paid 10% more for accommodations in Dublin, an average of $207 per night.

In Japan, Tokyo, Osaka and Kyoto visitor numbers grew by almost 9% for a record high of almost 32 million. Osaka and Kyoto both rose more than 10 spots on the list of the U.S. and Canada’s most popular international destinations.

Turkey’s tourism is booming despite a financially difficult year in 2018, with Istanbul jumping more than 10 spots in the top 50 most popular destinations for both the U.S. and Canada. International visitors went up by 22% in Turkey and Istanbul recorded the highest rise in price paid by American travelers in 2018.

Both American and Canadian travelers paid quite a bit less to enjoy four-star and five-star accommodations in 2018, at home and internationally.

For American travelers, three destinations saw their five-star rates drop by 13%: Charlotte, NC ($282 per night) and Louisville, KY ($226 per night) in the U.S., and Reykjavik, Iceland. In Iceland, the tourism boom of the past few years has continued to slow down, which brought down the average price paid per night to $478.

The HPI was set at 100 in its inaugural year, 2004. The index format allows Hotels.com to highlight year-over-year variations in actual prices paid per night by travelers without foreign exchange fluctuations distorting the picture.

Hotstats: Business travel and labor still concerns From labor shortages to lack of corporate and group demand, the hotel industry’s true recovery is…
Tripadvisor: Despite Slowing Demand, People Still Want to Travel INTERNATIONAL REPORT—Tripadvisor and Phocuswright jointly released the findings of a comprehensive new research paper into the…
Vacasa study: Vacation home rentals are on the rise Summer guest occupancy at Vacasa vacation homes is up 57% compared to 2019—so the question isn’t…
WTTC: Global business travel spending to rise by more than 25% Worldwide business travel spending looks set to rise by more than a quarter this year and…