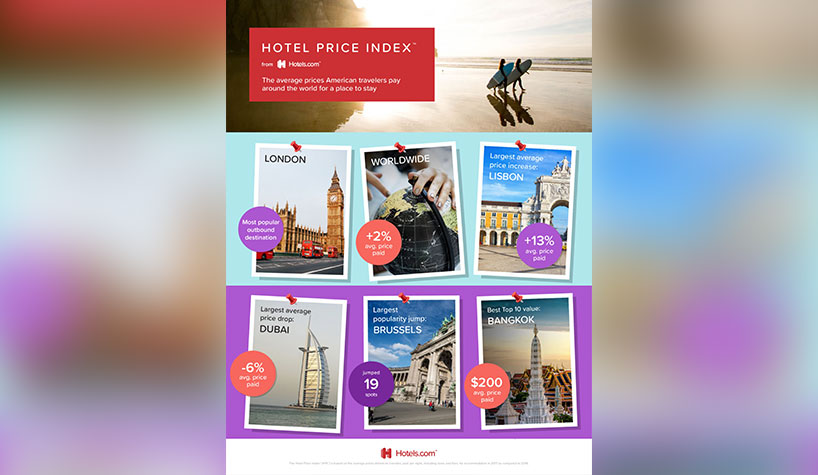 “The slight increase in average accommodation prices globally, combined with numerous markets having record visitor growth, has signaled a strong travel economy and a growing desire from consumers to experience the world,” said Johan Svanstrom, president of Hotels.com. “Cultural events have inspired travel more than ever before as we aspire not to just stand by and observe the action, but to instead actually be a part of it.”

In the U.S., more citizens have a passport than ever before, and as a result, they are looking to get out and experience the world, despite an increase in prices paid for hotel stays.

A few of the study’s key findings:

Sunshine South of the Border – Mexico

There is no doubt that travelers are looking to relax and enjoy the sunshine while on vacation. Cancun, Playa Del Carmen and Mexico City were the top destinations in Mexico for U.S. travelers. Among the cities analyzed, Americans traveling to Mexico paid the most for rooms in Playa Del Carmen—which had an average price of $247 per night—an increase of 2% from 2016.

Americans Flocked Across the Pond

With more than 40% of Americans traveling overseas in 2017, Europe topped the charts for the most desirable outbound region, and London was first on the list of international destinations. Despite the high prices, the capital’s long-standing appeal as a bucket-list city got some help from the pound—which has brought average accommodation prices down by 2% since 2016.

Spain became the second most visited country in the world, and sixth for U.S. travelers in 2017, with an average of $163 per night. Americans looking to explore without breaking the bank found the best value in Istanbul, paying an average of $92 per night.

Stretching the Budget in Asia

U.S. travelers found themselves paying more for their overnight accommodations in 70% of their Top 50 international destinations, but not in Asia. The HPI reported that Chiang Mai, Thailand, (49th), Ho Chi Minh City, Vietnam, (34th) and Bangkok (5th) had the lowest international average prices paid per night—all averaging below $100 per night. Thailand was the most popular country in the region for U.S. travelers, welcoming 35 million visitors in 2017.