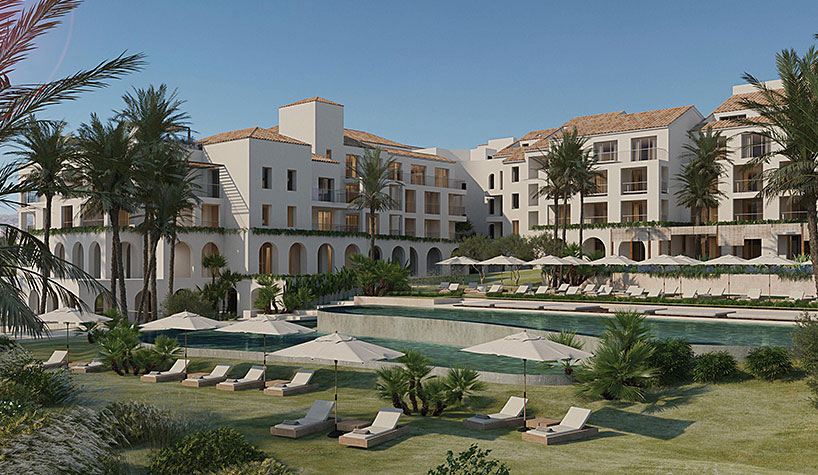 The former Byblos Hotel will become a 200-room resort and join The Unbound Collection by Hyatt.

INTERNATIONAL REPORT—Hotels in development in Europe include Spain’s former Byblos Hotel being redeveloped as part of Hyatt’s Unbound Collection, Delano’s first outpost on the continent and more.

Redeveloped Former Byblos Hotel
Hyatt Hotels Corporation has revealed that a Hyatt affiliate has entered into a franchise agreement with a wholly owned subsidiary of Intriva Capital European Principal Investment Fund I LP to redevelop the former Byblos Hotel in Mijas into a luxury 200-bedroom resort. The property, which has been closed since 2010, will be managed by Marugal Hotel Management and will mark the first Hyatt-branded hotel in Southern Spain. It is expected to open in early 2022 as part of The Unbound Collection by Hyatt portfolio.

The hotel will offer luxury amenities such as a health club and spa; indoor and outdoor pools; a cinema; a night club; family facilities including a kids club; and conference spaces for private events and business meetings. F&B venues will include a rooftop bar.

Delano Porto Cervo
Sbe has expanded the Delano brand to Europe with the Delano Porto Cervo in Costa Smeralda, Sardinia, Italy, which is expected to open by June 2023. Sbe will take over and redevelop the existing property in partnership with private equity firm Quianto Capital and its strategic advisor and asset manager, Enma Capital.

The 68-room property will undergo a complete redevelopment and remodel in keeping with Delano’s signature style. The property will feature a restaurant, lobby bar, pool bar, beach club and fitness studio.

When it opens in early 2021, the 227-suite Amsterdam aparthotel—which was recently acquired for the ECHO Fund—will become the first all-suite property to operate under the upscale Radisson brand in Western Europe.

Each of the studio, one-bed and two-bed apartments has its own fully-equipped kitchen. Other facilities at the canal-front hotel include a gym and an on-site bar and restaurant with outdoor terrace seating.

Zleep Hotel Glostrup
Deutsche Hospitality is expected to open another Zleep Hotel in Denmark in the fall of 2021. The 133-room Zleep Hotel Glostrup, a new building west of Copenhagen, will be developed by Oskar Group. The hotel will include a lounge and breakfast area, a bar and free WiFi.