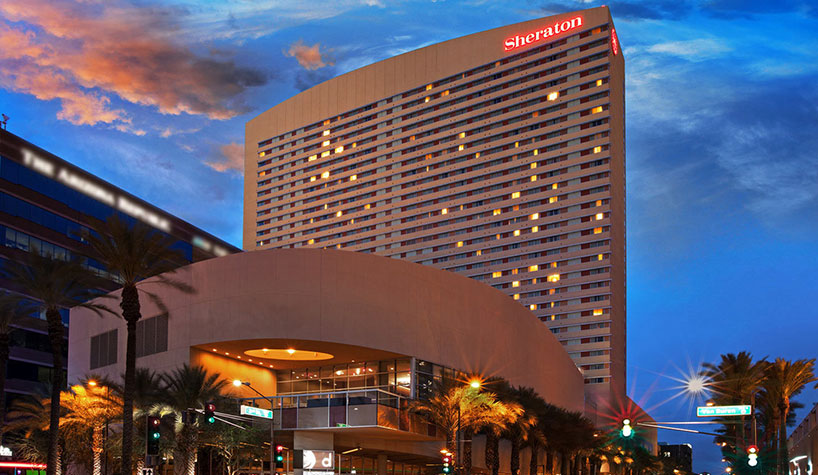 BETHESDA, MD—Marriott International, TLG Investment Partners and Concord Wilshire Capital LLC have acquired the Sheraton Grand Hotel located in Phoenix for $255 million. Marriott International is the majority capital partner with TLG and Concord Wilshire and will be managing the asset. The company plans for a significant renovation covering the downtown Phoenix hotel’s guestrooms and public space to transform the property into a cutting-edge model for the Sheraton brand.

“The hotel will provide a living and breathing showcase of our new vision for the Sheraton brand, underscoring our commitment to restore the brand to its leadership position,” said Arne Sorenson, president and CEO, Marriott International. “Going back to Sheraton’s roots as being the heart of the community, the renovated hotel will showcase the brand’s new focus on services and design that enable socialization, productivity and personalization, featuring collaborative venues and technology that enable unique experiences.”

The acquisition comes as momentum builds for Marriott International’s transformation of Sheraton, the company’s most international brand since its purchase as part of the Starwood Hotels & Resorts acquisition in late 2016. Earlier this month, the company revealed its comprehensive brand transformation strategy, creating a pop-up model lobby in New York City for owners, franchisees and other stakeholders to experience and evaluate first-hand. Feedback on the new vision has been overwhelmingly positive, according to the company, and Marriott International estimates that owners of Sheraton properties in the U.S. have already committed to invest more than $500 million to remodel Sheraton properties under the new standards.

While Marriott International remains committed to its asset-light business strategy, the company took a similar approach as it worked to reposition the Marriott Hotels brand five years ago. The company purchased and renovated the Charlotte Marriott City Center, which then served as a living innovation hotel that helped engage owners. Like the Charlotte property, Marriott International expects to sell the Sheraton Grand Phoenix, subject to a long-term management agreement.

The 33-story Sheraton Grand Phoenix opened in 2008 and is located in the heart of Phoenix’s downtown, where more than $4 billion has been invested over the past six years in office space, retail, restaurants, educational facilities and convention space. The Grand is also within walking distance to major sports teams’ venues and has played a role for national events that Phoenix has hosted including the Super Bowl, Final Four and large international conferences.

The hotel features about 77,000 sq. ft. of meeting space, a business center, a fitness center, a fourth-floor outdoor pool with a poolside bar, as well as a lobby restaurant and bar. The company expects to commence renovations in 2019.

The Lexington Hotel in NYC purchased for $185M In a joint venture, MCR, Island Capital Group and Three Wall Capital LLC have acquired the…
Arbor Lodging acquires Phoenix AC Hotel; more transactions Arbor Lodging Partners has acquired a AC Hotel in Phoenix, while the hotel division of The…
Sheraton Debuts New Look at Global Properties BETHESDA, MD—Sheraton Hotels & Resorts has officially debuted its new vision for the brand at six…
Courtyard by Marriott reveals new design strategy Courtyard by Marriott has revealed plans for a “modern design evolution and robust renovation strategy” for…