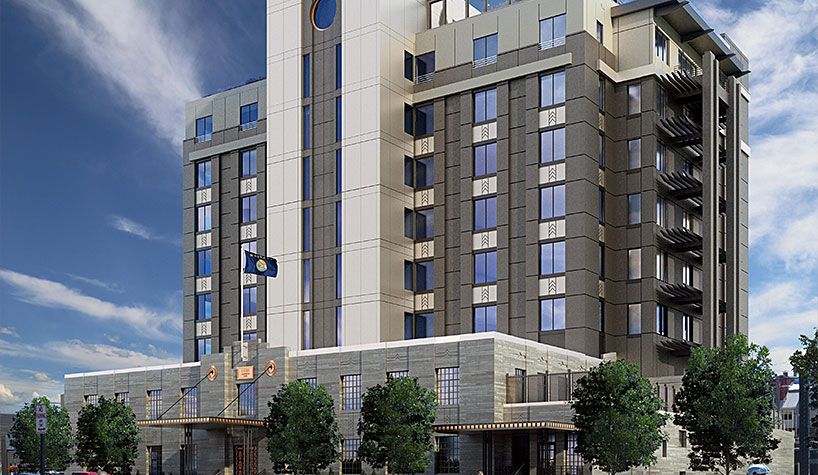 NATIONAL REPORT—Hotels are being developed across the U.S., some of which are expected to open this year. Here’s a look at the projects:

Located in a landmark National Guard Armory building joined by a new tower, the hotel was inspired by Montana’s rugged beauty and the storied history of the building with upscale modern amenities, according to Kimpton. The property takes its mountain modern cues from the art-deco features of the historic 1941 building it is set in.

Dual-Branded Hyatt in Chicago
Hyatt Place and Hyatt House Chicago Medical/University District, the first combined Hyatt Place and Hyatt House hotels located in Chicago, is set to open this summer in the Beaux-Arts classical-style landmark formerly the site of the 106-year-old Cook County Hospital. The 342,000-sq.-ft. adaptive-reuse project is part of a $150-million multiphase plan led by Murphy Development and SOM, in a design-build collaboration with Walsh Construction; Wiss, Janney, Elstner Associates, Inc.; and KOO. It will also include more than 4,000 sq. ft. of meeting space, open-concept public spaces, a 24-hour fitness center, a food hall, medical offices and a museum paying tribute to the hospital’s legacy. Upon opening, the hotels will be operated by Aimbridge Hospitality.

Drawing inspiration from the history of the infrastructure, the project will restore and preserve the historical pieces that have been rooted there for more than 160 years, which includes the original Beaux-Arts masonry detailing and terracotta ornamentation of the exterior; the wood-framed windows; interior decorative plaster work; the double-height main lobby and 106-year old restored marble stone staircase; as well as the double-loaded corridor and terrazzo flooring of the interior. The team also spent more than $18 million to replace all windows and 4,160 terracotta pieces on the exterior, made of granite, brick and limestone.

The Hyatt Place portion of the dual-branded property will include 103 guestrooms, a fitness center and more then 4,000 sq. ft. of meeting/fuction space. The Hyatt House will offer 107 apartment-style kitchen suites; The Commons lobby lounge; a workout room; and more than 4,000 sq. ft. of flexible meeting spaces.

Moxy South Beach
The 202-key, eight-story Moxy South Beach in Miami, set to open this fall, is Lightstone’s first Moxy property outside of New York. Designed by Rockwell Group, the hotel will include a lobby with an outdoor courtyard that threads together a series of spaces, including a restaurant; all-day bar; Cuban-themed bodega offering stylish beach accessories; and a co-working lounge which transitions into meeting studios.

The second floor will include a 72-ft. pool; fitness center; and indoor/outdoor bar and café. The rooftop will offer a shallow pool and a screening area. Additionally, fitness partners will host morning rooftop workouts for the complimentary #SweatAtMoxy wellness series.

The hotel will neighbor Kerioth’s corporate headquarters, as well as four additional hotels within The Township at Colony Park, a mixed-use project developed by Kerioth. It is expected to open early next year.

Brent Barron, of Barron Studio Architects in Jackson, MS, is serving as the architect for the AC Hotel Ridgeland. Kerioth is both developing and performing as the general contractor. The hotel will be managed by Tampa, FL-based McKibbon Hospitality.