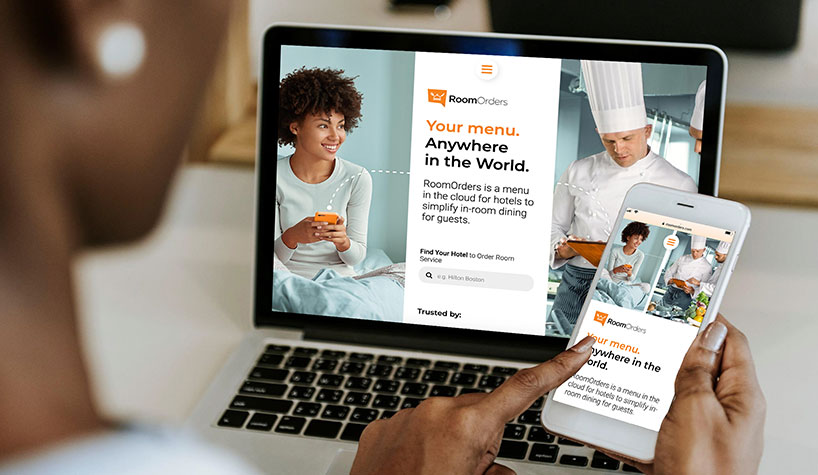 NEWARK, DE—RoomOrders is an app ready to disrupt hotel in-room dining. Offering a digital menu in the cloud to streamline food and beverage operations, RoomOrders aims to improve guest experience and revenue, while it defends against online food ordering and delivery platforms taking away market share from hotel restaurants and kitchens.

“The idea for RoomOrders was conceived by our Chief Technology Officer Haris Dizdarevic, while he was living in Boston and chatting with a friend who ran a Hilton restaurant there. It seemed strange that in this digital age, people were still using hardcopy menus and landline phones to order food in hotels,” said Eugene Jones, CEO, RoomOrders. “He started digging deeper into hotel room service and realized it was a highly underserved niche area, ripe for disruption. Haris shared his observations with another friend, Viktor Matic, who owns a software company, and pulled a team of developers together to create RoomOrders. I became involved because I travel a lot, I use room service all the time and I have experience building global brands.”

In-room dining is a popular point of service associated with hotels. However, operating a 24-hour kitchen on-property can be costly and poses a challenge for some hoteliers.

“A significant number of hotels feel compelled to operate room service as a loss-leader because surveys continually show that despite only around 20% of guests using room service regularly, about three-quarters consider it a deal-breaker if a luxury hotel does not have in-room dining,” said Jones. “We initially had two key missions: to improve guest experience, which we did merely by going digital, streamlining room orders and providing quality assurance; and to increase revenue, which we did by significantly raising average order values.”

However, Jones has witnessed “huge new tremors in the market” and the company is pivoting toward helping hotels leverage their real estate against disruption caused by Airbnb and Uber Eats by building connections within the hotels’ ecosystem of ancillary and auxiliary assets.

This fall, RoomOrders launched its first free trial in the U.S. with a handful of hotels, including the Hilton Boston. As a result, the team has achieved steady results after several months.

“We have had more than 3,000 users, hundreds of repeat users and just as many feedback messages from happy guests,” he said. “Usage is around 25%, which is very strong considering marketing is kept minimal to avoid clutter and intrusion. The key finding is that average order value quickly jumped above 30% compared to landline calls and remains above 30%. Management is pleased to be able to track performance and react immediately to quality indicators like delivery time, or guest complaints, which would otherwise end up publicly shown on TripAdvisor or Yelp.”

According to Jones, the immediate benefit for the guest is that they can continue using their own devices once they enter any hotel, rather than step into a time machine and use analog phones or learn new technology for each new hotel.

“As RoomOrders can be used alongside any other solution, it does not disrupt existing operations and merely offers an extra option to guests,” he said. “Some may prefer old-fashioned habits, while early adopters will be thrilled that the hotel has made their life easier and better. RoomOrders is web-based so there is no need to download any app; guests can just scan a QR code in the room or visit the hotel website.

RoomOrders streamlines room ordering by providing guests vivid illustrations of menu items, allowing users to visualize their order. As the orders go direct to the hotel kitchen or restaurant, the process is made more efficient, errors in communication are eliminated, while money is saved on employing staff that may not be versed in the menu and options and can be utilized for other more pressing duties.”

For Jones and his team, the mission is to be in every four- to five-star hotel in the world.

“Most branded hotels have in-room dining as it is almost an expectation considering the price of a room, whether a person uses it or not,” he said. “Some hotels do not have in-house kitchens and outsource their IRD to restaurants on the premises. Whatever the model, we are a major value-add for both hotels and their guests. In addition, we are evolving to help hotels protect their real estate from the rapidly growing food delivery sector by claiming a cut from either restaurants in the area or popular delivery services. Hotels are well-placed to demand a cut of the estimated $220 billion food delivery market, and RoomOrders helps them do this by providing options in room service.”