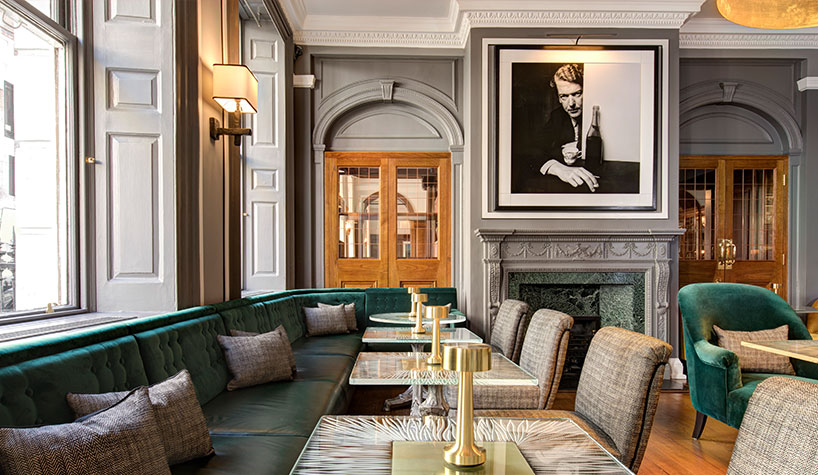 Inside the Donovan Bar at Brown’s Hotel, a Rocco Forte Hotel, in London

LONDON—Rocco Forte Hotels has launched projects across its portfolio, including the comprehensive redesign and reopening of Hotel Savoy in Florence, Italy; the new restaurant and bar in Brown’s Hotel in London; and the renovation of the most coveted suite at The Balmoral in Edinburgh. Here’s a closer look:

After undergoing an extensive renovation since closing its doors in fall 2017, Hotel Savoy in Florence will be reopening with a new design ahead of the city’s summer season. Located in the heart of Florence on Piazza della Repubblica, the renovation was led by Olga Polizzi, director of design for Rocco Forte Hotels.

The distinctive interior design reflects the city’s culture, with nods to the Florentine tradition of fine fashion and leather craftsmanship. The hotel’s lobby features a 16-ft. corniced ceiling and reception desks adorned with caryatid putti, to represent the four seasons, and the Fleur de Lis emblem of the city.

The number of guestrooms and suites has also been reduced from 102 to 80 and the hotel will be unveiling a Duomo Presidential Suite—which will occupy its own wing with uninterrupted Duomo views—as well as a new two-story suite with views of the Florentine rooftops.

The Balmoral, a Rocco Forte Hotel

The Balmoral, a Rocco Forte Hotel, has unveiled a complete redesign of the Scone & Crombie Suite. Named after the Scone Palace in Perthshire, the suite’s design was led by Polizzi.

The suite has cornices, grand fireplaces and floor-to-ceiling windows framing views of Edinburgh’s Old Town. Polizzi designed the suite with a nod to both the city’s royal connections and the grandeur of the suite. One of the highlights of the suite is the custom-made tapestry style “Devonshire Swans” wallpaper, which adorns the walls of the entrance-dining room and has been printed for the first time on canvas paper by British fabric house Watts of Westminster to resemble a traditional tapestry. The suite showcases hues of blues and greens throughout, reminiscent of the Scottish countryside, coupled with stripes and florals to evoke a strong Scottish feel.

Michelin-starred chef Heinz Beck will be returning to London with a new restaurant, Beck at Brown’s, launching on April 16 at Brown’s Hotel, a Rocco Forte Hotel.

Redesigned by Polizzi, the venue will offer a new casual dining menu of classic Italian dishes, reinvented using the finest seasonal British ingredients. The restaurant will have Heinz’s Italian pedigree, refined over his years running kitchens in Rome in the lauded La Pergola and Attimi—his recently opened, more casual outpost.

With a focus on a light and healthy menu—Norfolk chicken and lamb from the organic Rhug estate—each dish will be crafted by Heinz to create a hearty Italian menu. Beck at Brown’s will bring dishes from throughout Italy.

Following a complete redesign by Polizzi and Inge Moore, the Donovan Bar at Brown’s Hotel, a Rocco Forte Hotel, London will officially open on April 9. With an exclusive drinks menu created by Salvatore Calabrese, the bar takes inspiration from its namesake and close friend of the Forte family, the 1960s photographer Sir Terrence Donovan.

Salvatore has created a list of 16 signature cocktails that emphasize Donovan’s reputation as one of the 20th century’s most revered photographers. The largest private collection of his work will adorn the walls of the space and complement the hotel’s classically English architecture. One of the standout parts of the redesign is the “Naughty Corner,” a semi-private area for up to 12 people where guests will be able to sit amongst some of the raciest photos in the photographer’s portfolio.