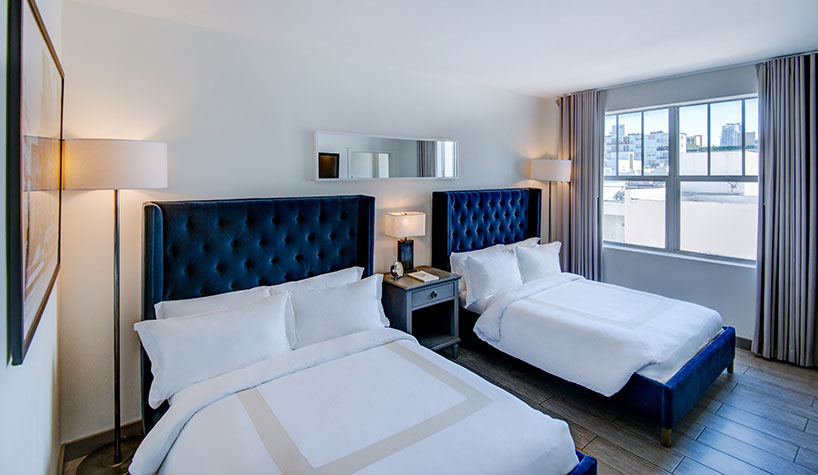 INTERNATIONAL REPORT—Whether it’s inspired by a seaside locale or injecting a Scandinavian-minimalist design, hotel properties are sprucing up their offerings for today’s modern traveler. Here’s a look at four of them:

“Upon purchasing The Clinton Hotel, we immediately envisioned its future as a four-star property in one of the most sought after locations in Miami Beach. It’s a unique part of South Beach’s illustrious history, and we wanted to utilize as much of that rich history in our renovation,” said Shawn Vardi, COO at Think Hospitality Group. “We restored the lobby to its original layout and were even able to recover the original 1930s Spanish tile, while incorporate modern elements and introducing a new food and beverage outlet.”

River’s Edge Hotel unveiled a new identity with fresh, Scandinavian-minimalist design, following a comprehensive guestroom remodel and upgrades to its lobby, fitness center and meeting and event spaces. Situated along a tree-lined bend of the Willamette River in Portland, OR, a short distance from downtown, the 100-room hotel offers access to the city center.

The Radisson Hotel Baltimore Downtown–Inner Harbor is now in the final stages of a multimillion-dollar renovation that began earlier this year.

Crescent Hotels & Resorts has overseen the complete programming, rebranding and product transformation of both hotels.

Four Seasons Resort Nevis is set to embark on a multimillion-dollar enhancement project this year. The multi-phase renovation to the 350-acre property will kick off in April, starting with its 196 guestrooms and suites.

Preserving the architectural and design integrity of the original building exteriors, the room renovations will be have a lighter, cleaner and fresher decor, creating interest and drama through the use of scale, texture, pattern and color, according to the brand.

All guestrooms and suites are expected to be completed by November.

Following the room renovations, the resort will also begin a reimagining of its Great House and lobby areas, as well as its F&B outlets.

Luxury Abounds at These Northeast Revamps NATIONAL REPORT—Luxury properties have seen enhancements throughout the Northeast, from new lobbies to dining and even…
Canopy hotel opens in Chicago; more U.S. openings Recent openings include a Canopy by Hilton property in Chicago’s Loop neighborhood, citzenM’s second hotel in…
Spain's Byblos Hotel to Be Redeveloped; More Europe Projects INTERNATIONAL REPORT—Hotels in development in Europe include Spain’s former Byblos Hotel being redeveloped as part of…
The Laura Hotel opens in Houston; more debuts Recent openings include The Laura Hotel, a member of Marriott’s Autograph Collection, in Houston; a newly…