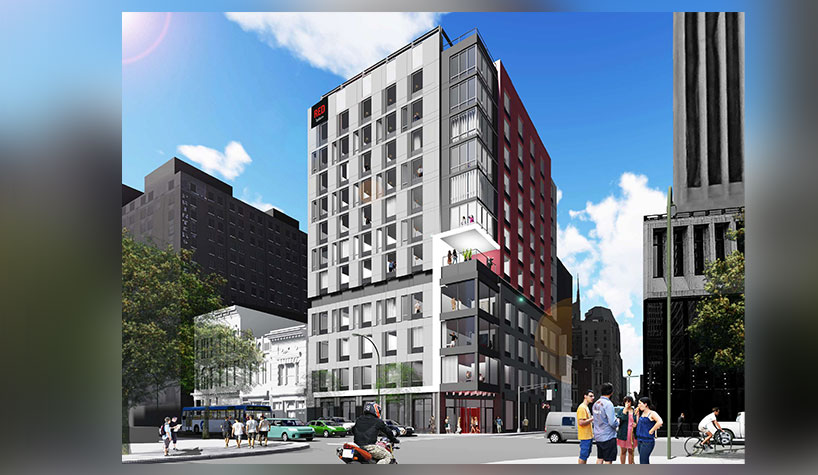 RHG’s West Coast portfolio will add another feather to its cap with the signing of Radisson Red Los Angeles Arts District. This new-build hotel will feature 140 guestrooms, a fitness center, meeting space and a rooftop bar with views of downtown Los Angeles. Guests will be able to enjoy the farm-fresh menu at the brand’s signature restaurant, OUIBar + KTCHN. The hotel will be in the Los Angeles Arts District, close to art galleries, restaurants with celebrity chefs, microbreweries and shopping. The hotel is anticipated to open Q1 2024.

Marking the brand’s entrance into the Music City, Radisson Red Nashville Arts District will be part of an existing commercial building, following an extensive renovation that includes adding six floors to construct the hotel. Guests will be able to book any of the 120 guestrooms, along with taking advantage of the fitness center and meeting space. There will be a restaurant and bar in the lobby, or guests can unwind while enjoying the view of the city at the rooftop bar. The hotel will also have a speakeasy in the basement, a first for the Radisson Red brand. The hotel will be located in Nashville’s Printers Alley, a historic part of Nashville that has dining, shopping and entertainment. The hotel, which will be managed by Radisson Hotel Group, is anticipated to open in Q3 2021.

Following recent additions to the Radisson portfolio in Manhattan, the brand continues to show growth on the East Coast with hotel signings. Radisson Hotel Long Island City is preparing to open with an incredible location just outside of New York City. The new-build hotel will have 380 guestrooms and is anticipated to open in Q3 2020. The newly signed Radisson Hotel Raleigh-Durham Airport will be the first new-build prototype hotel featuring the latest Radisson design. The hotel will have 140 guestrooms and extended-stay rooms, 1,600 sq. ft. of meeting space, on-site dining, a fitness center and an outdoor pool. The hotel is anticipated to open Q3 2021.

Global Plan for a Future with Reduced Single-Use Plastics

Radisson Hotel Group will implement bulk amenity dispensers across all brands by the beginning of 2022, replacing small bottles for common bathroom products. This action will remove 57 million miniature amenities from circulation, avoiding the use of almost 500 tons of plastic annually.

In addition, Radisson Hotel Group has a global commitment to #refusethestraw, ensuring plastic straws and plastic stirrers are no longer used in its hotels by 2021; eco-friendly alternatives will be offered to guests upon request. The group is also running a series of innovative pilot projects in various locations, with the aim of finding new ways to drive plastic reduction globally.