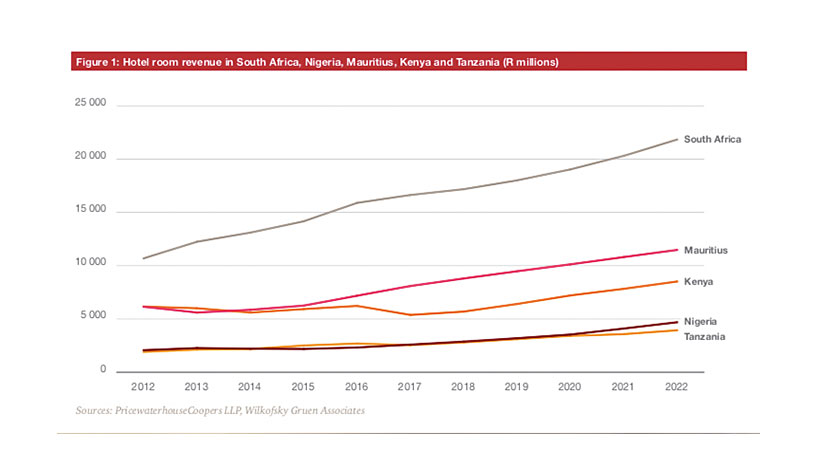 The hotel market in Africa is poised for growth.

JOHANNESBURG—Africa’s hotel sector has the potential for further growth over the next five years, according to a report from PwC. An increase in the number of foreign and domestic travelers, as well as an expansion in a number of hotel chains on the continent reinforces the hotel sector’s untapped potential for business growth.

PwC’s eighth edition of the “Hotels Outlook: 2018-2022” includes information about hotel accommodation in South Africa, Nigeria, Mauritius, Kenya and Tanzania. The report projects that hotel room revenue for the five markets as a group will increase at a 7.4% compound annual rate to $3.7 billion in 2022 from $2.6 billion in 2017.

“Tourism to the African continent has proven to be resilient in the face of economic and political uncertainty, impacts of droughts and other regulatory changes,” said Pietro Calicchio, hospitality industry leader with PwC Southern Africa. “The opportunities are aplenty for this industry to enjoy further growth albeit at a more modest pace. However, as we continue to see there are also a number of challenges facing each country. This is an industry that is reactive to the smallest change in political, regulatory, safety and sustainability matters.”

South African hotel room revenue is expected to expand to $1.6 billion in 2022, up 5.6%, compounded annually, from $1.2 billion in 2017. The growth in hotel rooms in South Africa, remains similar to that forecast in the 2017 Hotels Outlook with an additional 2,900 rooms to be added over the next five years. We also forecast occupancy rates to continue to grow over the forecast period and to reach 62.5% in 2022.

International visitor numbers to South Africa continued to grow with a 2.4% increase overall. The outlook for 2018 remains positive albeit at lower percentages than experienced in 2016. The report projects that the number of foreign visitors and domestic tourism will increase by 5.3% in 2018. The total number of travellers in South Africa is expected to reach 19.5 million by 2022, a 4% compound annual increase from 16 million in 2017. “There is also continued debate on further relaxation of visa requirements for international visitors and this may impact on our forecast growth,” said Calicchio.

While the fundamentals affecting tourism to South Africa remain favorable, helped by an improving global and local economy, it is impacted by other factors like the water shortage in Cape Town. As there is little historical precedence, it is difficult to project the impact of the drought on tourism. Although bookings were down in Cape Town, overall tourism to South Africa held up during the festive season and actually picked up in the first quarter of this year. Hotels in Cape Town are taking a number of steps to conserve water. If the winter rainfall continues at the current rate, the crisis may be limited in scope.

Nigeria is expected to be the fastest-growing country over the next five years. A number of new hotels are scheduled to be opened during this time. Continued improvement in the domestic economy will also lead to faster growth in guest nights.

The hotel markets in Nigeria and Mauritius continued to perform well in 2017 with both achieving double-digit growth whereas Kenya and Tanzania had decreases in room revenue. For the forecast period as a whole, the number of available rooms in Nigeria will rise from 9,700 in 2017 to 12,600 in 2022, a 5.4% compound annual increase—still the largest expansion of any country in the report.

Kenya experienced a drop in visitors following the national elections in August 2017, but recovery was already seen in December with an increase in visitor numbers resulting in 9.9% overall growth. However, this was not enough to boost overall room revenue, which showed a 13.5% decline in 2017. Going forward, tourism in Kenya is expected to increase at a 6.9% compound annual rate, rising to 2.06 million in 2022 from 1.47 million in 2017.

Tanzania’s hotel room revenue amounted to $206 million in 2017, a decline of 5.5% over 2016 due to a drop in guest nights. However, guest nights are expected to grow this year and a forecast revenue growth of 10.2%.

The hotels and tourism sectors in each of the countries in our report are all showing signs of continued growth over the forecast period. Tourism remains an important part of each economy. However, the smallest change or disruption can have a fundamental impact on the future growth of each market. “It is therefore important that investors, hotel operators, tourism bodies and governments continue to work together to grow this important industry and ensure its sustainability so that all stakeholders derive the maximum benefit from it,” said Calicchio.