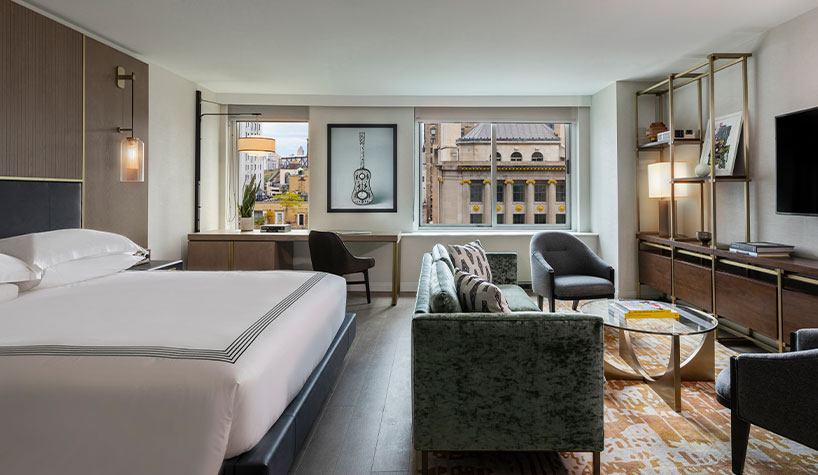 The property has 587 guestrooms and suites, including the 174 Upper Stories, a collection of luxurious accommodations offering high-end amenities and exclusive offerings and programming, including access to the private Upper Stories Lounge.

Food & beverage outlets include Burger Joint and the Standing Room Only cocktail bar, with more opening next spring.

The property features public spaces designed by architect Thomas Juul-Hansen and guestrooms designed by Stonehill Taylor. Guestroom artwork and programming are music-centric as a nod to the hotel’s history as a home to many musicians and actors who played at New York City’s top music venues.

The hotel also offers direct access to the Minneapolis Skyway System and features more than 30,000 sq. ft. of meeting space.

Located in NYC’s Financial District, the property operates under the Hospitality Living business arm of WhyHotel, and houses both long-term residents and nightly stay guests in fully furnished accommodations. It is a former office building, the majority of which was converted to apartment-style units in 2015. The building features just more than 200 units and amenities such as a seventh-floor terrace with an outdoor grill and kitchen; a fitness center; a guest laundry room with ping pong and pool tables; and community kitchens.