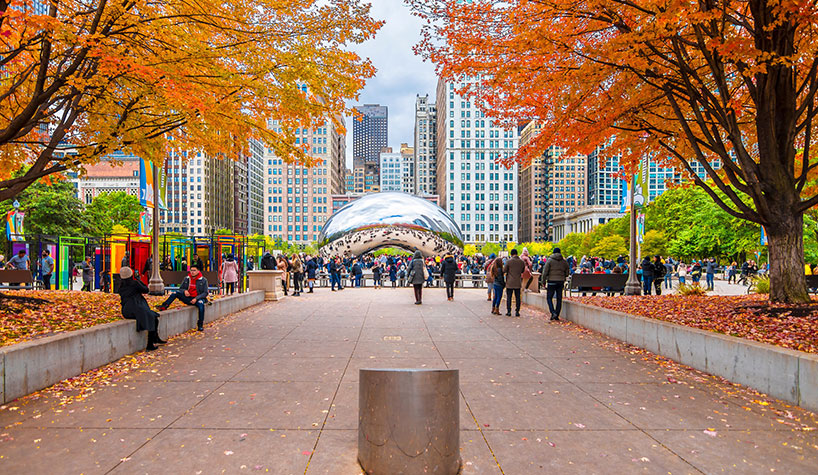 Major U.S. cities are experiencing a revival in visitors and activity right now. This is an especially exciting development because the flexibility of remote work means that many people are less limited in their travel options—a long weekend away can now be even longer. Priceline took a look at the data for hotel, flight and package bookings across 20 U.S. cities to find out the advantages of booking travel right now, and where to go to get the most value for your money. Here’s what they discovered, plus ideas for what to do in the top five cities.

Cities are making a comeback. Major cities across the country are seeing an uptick in travel in the second half of 2021 compared to the first half of the year, particularly northeastern cities, such as Boston;  New York City; Chicago; and Washington, DC.

Hotel rates are rising—and may only get more expensive. Compared with the second half of 2019, the average daily rate of a hotel stay has increased by 5%. As travel continues to rebound, Priceline expects that these rates—which are already above 2019 levels—will likely continue to rise.

Airfare is still more affordable than it was before the pandemic. The average cost of a roundtrip ticket has dropped 15%, while the TSA is reporting checkpoint numbers that are more than twice as high as 2020, although still lower than 20191.

Package deals are better than ever. Priceline’s Work-Life Balance Report revealed 74% of Americans agree that saving money through travel deals is a high priority—a sentiment reflected in an increased interest in bundling hotels and flights when traveling to major U.S. cities. In the second half of 2021, average package prices dropped 10%, reflecting an even stronger value proposition in the face of rising hotel costs.

The State of City Prices

Orlando, Sacramento and Phoenix are showing the biggest increase in consumer interest for hotels during the second half of 2021 compared with the same time period in 2019. While most major U.S. cities show an increase in average daily hotel rates, some are showing large drops, particularly San Francisco (-21%), New York City (-14%) and Seattle (-11%), making them incredible values right now.

When it comes to flights, Miami, Orlando and Atlanta are showing the most growth in consumer interest when comparing the second half of 2021 with the same period in 2019. While average roundtrip flight costs remain down across major cities, Miami (-26%), Los Angeles (-16%) and Phoenix (-15%) have all experienced the largest decreases, making them especially attractive and wallet-friendly. Boston is the only city for which average roundtrip flight tickets have remained flat compared with 2019 rates.

And packaged deals for hotels and flights to Miami, Tampa and Phoenix, all warm-weather destinations with great outdoor activities, are showing the most growth in consumer interest in the second half of 2021 compared with the same period in 2019.

5 Cities Worth a Closer Look

To help travelers plan their next trip safely and affordably, Priceline further evaluated all of these cities—for roundtrip hotel and airfare pricing, and how to get the best experience by extending your stay in surrounding areas—and homed in on the five best cities to visit now: New York City; Los Angeles; Chicago; Washington, DC; and San Francisco.

New York City The city known for constantly reinventing itself is guaranteed to offer something new every time you visit, not to mention a ton of free attractions. This fall, visitors can enjoy the long-anticipated reopening of Broadway shows, drive north to go apple picking at farms like Love Apple Farm in the Hudson Valley, or attend Comic Con on Oct. 7 or 8, where you may spot original Priceline Negotiator, William Shatner.

Los Angeles To discover the city’s outdoorsy side, consider taking a day trip only two hours east to Big Bear Lake for its OktoberFest event, which runs through Nov. 7.

Chicago Watch the leaves change in Millennium Park, attend one of the city’s many food festivals—Chicago Gourmet is a standout—or even celebrate Halloween in Chicago style: with parades, haunted tours, Day of the Dead celebrations, and more.

Washington, DC Beyond visiting the historical landmarks that dot the capital, you can also enjoy sporting events, check out free street fairs, or attend unique events like Brews and Views (Oct. 21) at the National Museum of Women in the Arts, a happy hour open to all where you can discuss the intersection of beer making, art and politics.

San Francisco The weather here is perfect in the fall, without the city’s signature summer fog. Check out the Castro Street Fair (Oct. 3), a free, fun-filled festival with live music and dancing in the street.

Priceline reveals top U.S. peak-season travel trends After a devastating pandemic kept us at home for over a year, Priceline took a deep…
SiteMinder Reveals Top Hotel Booking Revenue Makers SYDNEY—Guest acquisition platform SiteMinder has revealed its annual lists of the distribution channels that brought the…
Priceline survey reveals workcations are on the rise After a long pandemic year, the overwhelming majority (92%) of Americans will travel, or already have,…
Booking.com Reveals Nine Predictions for the Future of Travel AMSTERDAM—Digital travel site Booking.com has combined research from more than 20,000 travelers across 28 countries and…