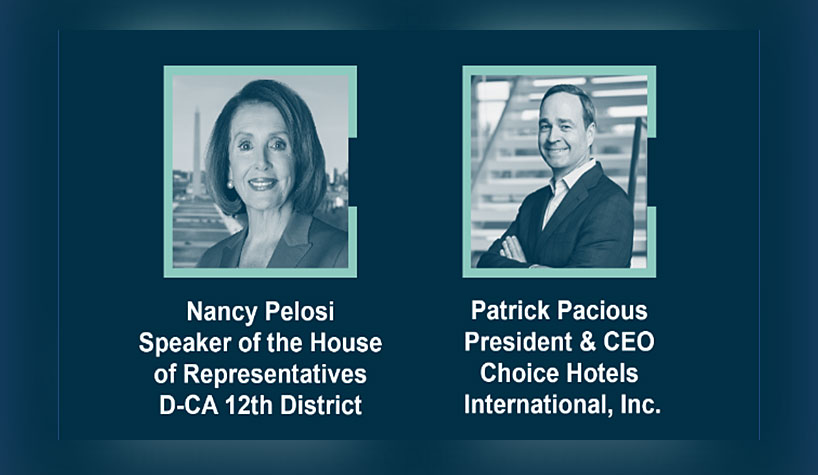 NATIONAL REPORT—Speaker of the House Nancy Pelosi (D-CA) joined Pat Pacious, president/CEO of Choice Hotels International Inc., and moderator Chip Rogers, president/CEO of the American Hotel & Lodging Association (AHLA), for the latest edition of the AHLA’s Forum Speaker Series to discuss the latest on the ongoing negotiations of the next stimulus package and how it will relate to the hospitality industry.

Pelosi said that the first priority of any new legislation is combating COVID-19 itself. “We’ve had the HEROES [Health and Economic Recovery Omnibus Emergency Solutions] Act that we passed almost three months ago. Since that time, three million more people have been added to the list of those affected and 70,000 more people have died,” she said. “We think that in order for us to open up our hotels fully, open up our industries and open our schools safely, we must attack the virus. We have big provisions in the bill for testing, tracing, treating, distancing, masks, sanitation and the rest to attack the virus. Even though we’ve had legislation, we haven’t had the execution of it in a way that we need to do—and that’s in our bill.”

Pelosi said she’s “optimistic” that an agreement will be reached, later giving a hopeful timeframe of “within the next 10 days.”

She went over some more provisions that were being negotiated for the next bill. “The first bill that I orchestrated as leader was TRIA, the Terrorism Risk Insurance Act, and that was to have a backstop for what the insurance company would have to pay and then the federal government would come in,” she said. “We have to have something like that. The fact that you all have business interruption insurance that didn’t apply because of a so-called act of God, [or] maybe you didn’t even have that kind of insurance—so we want something like that.”

She continued, “In the meantime, we have to be able to try to use the tax code in ways that will get us through this because it’s important to the economy of our region. Some of the other things we’re doing in the bill: We have the employment retention tax credits that I know that you are interested in. We will have a second dip for going back to PPP. It’s not there yet. But [Congresswoman] Nydia Velazquez [D-NY], who does our small business piece, has been working in a bipartisan way to see how we can get that second bite of the apple.”

Pelosi said of some of the tax credits that may or may not be in play, “We’re hoping to have tax credits that help with healthy workplace considerations. We’re trying to stop this virus, and we have to do everything we can to do so. You want the travel tax credit. I don’t know that that would be a part of this kind of a bill, but it’s certainly something that we should be considering.”

Before Pacious joined the discussion, Pelosi mentioned that, at the same desk she was sitting at during the forum, she would be in negotiations on the bill two hours later with White House Chief of Staff Mark Meadows, U.S. Secretary of the Treasury Steve Mnuchin and Senate Minority Leader Chuck Schumer (D-NY).

Liability Protection and the PPP
Pacious discussed what would be important for the hotel industry to be included in the next piece of legislation. “There are really two key concerns [for our industry],” he said. “One is the question of liability protection, and that’s really tied into the cleanliness standards at the hotel, and the second one, which is a very immediate concern, is liquidity. I’m pleased to hear that you mentioned that recapitalizing the PPP Loan program is something that both sides appear to be willing to do. Seventy percent of our owners have taken advantage of a PPP loan. I know in the future there’s talk, which I think is good, about limiting access to that program to those businesses that are really severely impacted. I know there were folks who got into the PPP program that did not need it as much as the hotel industry.”

He also pointed to the economic loss threshold, noting that 50% has been brought up, but “that’s really too high to provide meaningful relief to our small-business owners. We’d like to see it more in the 25-30% range. You have to think about our business as an asset-heavy business. You have to own a building and the operating margins are small. So, there’s a significant amount of debt that our owners have to deal with.”

He continued, “Going forward, we’ve heard there may be forgiveness for loans under $150,000. The application for that needs to be simplified, and the documentation requirements for that should be minimal at most. Also important to our industry are the destination management organizations [DMOs]. These are 501c organizations who market local communities for travel, so allowing them access to the PPP will also be important to our industry. And, finally, tax credits for CapEx or expenditures that are being put forth so that our industry can stay safe. The employee retention tax credit is something that we think would be really helpful if that is expanded from the CARES Act and the travel expense tax credits for meals and entertainment. It doesn’t have to be full-time, it can be a temporary one. That would really help business travelers to get back on the road.”

Pelosi responded that she will take all of these concerns into consideration, and added, “The more people have confidence to spend, the better and sooner our revival, but it’s hard if we do not curtail the growth of this virus. We have a big, strong package—$3.4 trillion. Now, we anticipate that we will negotiate for some other place money-wise, but that’s what we need.”

The discussion then turned to the Main Street Lending Program. Rogers said, “If we were to characterize the PPP as a big success, we would have to honestly characterize the Main Street Lending Program as a big failure for anyone whose business relies on real estate because the formula for accessing loans through the program pretty much precludes anyone who has a significant amount of debt—or really any real estate debt. I’m not aware of any hotel company or any individual hotel that has been able to gain access to the program because of that debt test.”

Pacious explained why hotels couldn’t take part. “Six times EBITDA is the threshold of the loan amount. You just can’t get there from the standpoint of covering your mortgage,” he said. “So, it’s really not effective for hotels. The Main Street lending was really meant to help small and medium-sized businesses. But it’s that earnings threshold that’s way too low at six times. That is a real showstopper with regard to anybody moving forward with that plan.”

Pelosi said she would look into this issue and share what was said with her colleagues.