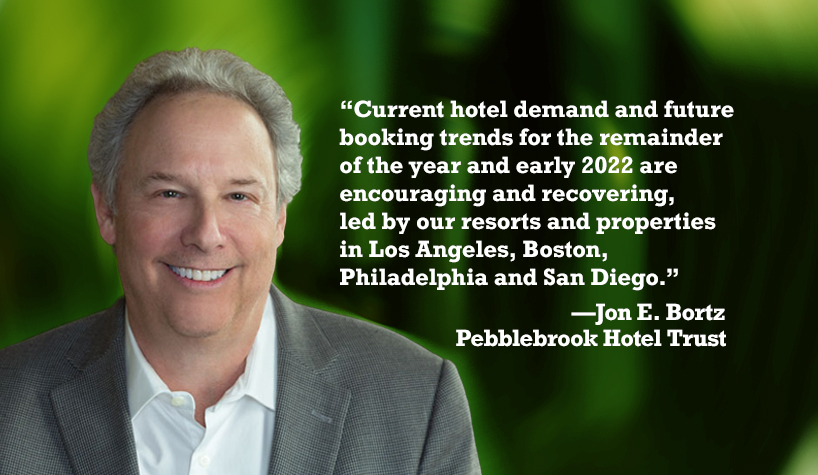 “For the first time since the pandemic started, we achieved positive adjusted FFO [funds from operations] in the third quarter; in this case, $21.4 million,” said Jon E. Bortz, chairman/president/CEO, Pebblebrook Hotel Trust. “We experienced significant strength at our resorts throughout the quarter, and business and leisure travel improved at many of our urban hotels. While the recovery in business travel temporarily paused in mid-August through mid-September due to concerns with the Delta variant and many companies delaying their return to office plans, corporate demand began to reaccelerate in mid-September and has continued throughout October. Current hotel demand and future booking trends for the remainder of the year and early 2022 are encouraging and recovering, led by our resorts and properties in Los Angeles, Boston, Philadelphia and San Diego. We are also pleased with the great success we’ve had this year reallocating capital from our recent property sales into $384 million of highly attractive, immediately accretive investment opportunities.”

“Despite the pause in the recovery of demand caused by concerns around the Delta variant, our results exceeded expectations, led by same-property ADR which beat Q3 2019,” noted Bortz. “These exceptional results were driven largely by our resorts, which generated room rates more than 57% higher than the comparable quarter in 2019, with RevPAR 21.8% higher. Hotel EBITDA at our resorts for Q3 exceeded the comparable quarter in 2019 by 45.4%, and hotel EBITDA margins at our resorts were more than 1,000 basis points higher, a significant accomplishment in this challenging environment. We are also pleased with our hotel management teams’ positive progress in attracting additional associates to our hotels to fill open positions while increasing operating efficiencies and expanding the use of technology at our properties, and we thank them all for their heroic efforts during these very challenging times for the hospitality industry.”

The company expects to invest a total of $80 million to $90 million during 2021. During the remainder of the year, it will make progress on or complete its planned investments in the following redevelopment and repositioning projects that it believes will generate significant growth and returns:

Southernmost Beach Resort in Key West, FL (estimated at $15.0 million), a comprehensive guestroom renovation, including all casegoods, softgoods and bathrooms, including tub to shower conversions. The renovation commenced this July and was substantially completed in late October.

Hotel Vitale (estimated at $25.0 million), a total transformation into the sustainability-focused, mission-driven and luxury experiential 1 Hotel San Francisco, which will offer nature-inspired designs and environmentally focused aesthetics throughout guestrooms and suites, public areas, and meeting and event venues. The redevelopment began in July, and the hotel will remain closed until the redevelopment’s targeted completion in the first quarter of 2022.

Grafton on Sunset in West Hollywood, CA (estimated at $5.5 million), a comprehensive redevelopment of the hotel’s indoor and outdoor public areas and suites, and a refresh of the guestrooms. The renovation began in late October and is expected to be completed in the first quarter of 2022, when the hotel will be renamed, repositioned and become part of the company’s Unofficial Z Collection.

As plans are completed and governmental approvals are received, the company will evaluate commencing additional previously planned major renovation and repositioning projects in 2022.

Strategic acquisitions and dispositions
On July 22, Pebblebrook acquired the 200-room Jekyll Island Club Resort in Jekyll Island, GA, for $94 million. On Sept. 9, it completed the sale of Villa Florence San Francisco on Union Square for $87.5 million.

Year-to-date, Pebblebrook has sold $276.1 million of assets and acquired $384 million of properties.

As of Sept. 30, Pebblebrook had $182.7 million of consolidated cash, cash equivalents and restricted cash, in addition to $644.2 million of additional undrawn availability on its senior unsecured revolving credit facility, for total liquidity of $826.9 million.