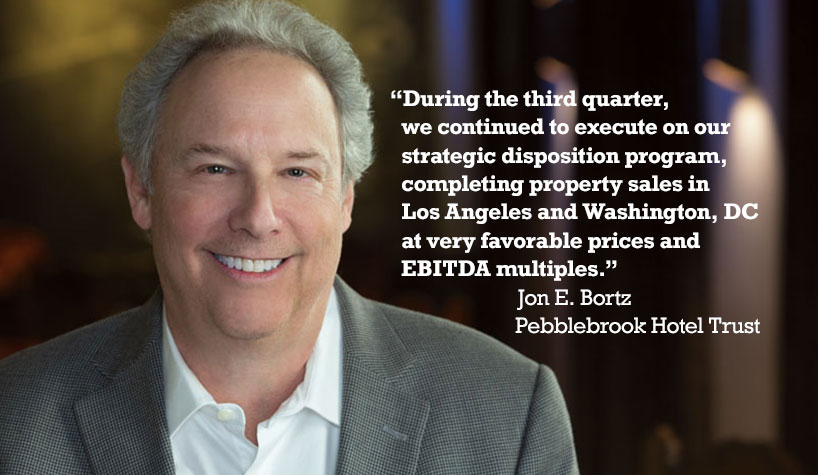 BETHESDA, MD—Pebblebrook Hotel Trust reported a poor performance for the third quarter as it undergoes its strategic disposition program.

“During the third quarter, we continued to execute on our strategic disposition program, completing property sales in Los Angeles and Washington, DC, at very favorable prices and EBITDA multiples,” said Jon E. Bortz, chairman/president/CEO, Pebblebrook Hotel Trust. “We’re now three quarters of the way to our 2019 property disposition financial goal. Pursuant to our plans to create long-term value, we’ve made further progress on our redevelopment plans, making operator changes at two properties in Washington, DC, to be redeveloped and repositioned next year, as well as announcing our future plans to comprehensively renovate and rebrand Paradise Point Resort & Spa as a Margaritaville Island Resort. We also managed to meet our overall corporate performance outlook for the quarter, despite slightly weaker than expected results at the property level due to transient travel demand moderating further and lost business due to the negative impact of Hurricane Dorian in September.”

“During the third quarter, our overall performance versus our expectations was impacted by weaker performance in San Diego, Los Angeles, San Francisco and Washington, DC,” said Bortz. “We also lost business at our hotels and resorts located in South Florida, due to the threat of Hurricane Dorian in early September. Despite the moderating demand growth environment, our hotel teams working closely with our asset managers continue to do a tremendous job limiting expense growth and finding creative and sustainable ways to increase efficiencies and productivity and take advantage of our larger scale through executing on new portfolio-wide initiatives, which are now running at an annual rate of savings of $5 million, halfway to achieving our $10-million objective. We expect to steadily execute on our portfolio-wide initiatives program to generate additional expense savings and operating synergies, create long-term value and achieve our objective by the end of next year.”

During the third quarter, the company completed $138.2 million of property sales, including Hotel Amarano Burbank in Los Angeles for $72.9 million; Rouge Hotel in Washington, DC, for $42 million; and Hotel Madera in Washington, DC, for $23.3 million. In combination with the $310.8 million of sales from the first and second quarters of 2019, the company has sold properties for a total of $449 million year to date.

In October 2019, the company also executed a contract to sell the Topaz Hotel in Washington, DC, for $33 million. This sale is subject to normal closing conditions, and the company offers no assurances that the sale will be completed on these terms, or at all. The company is targeting to complete the transaction late in the fourth quarter of 2019.

The company continues to be encouraged with pricing levels and overall buyer interest in the investment markets. The company estimates it will complete or execute contracts to sell an additional $150 million of properties during the fourth quarter, which includes the sale of Topaz Hotel for $33 million, and an additional $117 million for other properties.

Since the company commenced its strategic disposition plan on November 30, 2018, and assuming the sale of Topaz Hotel is completed, 13 hotels will have been successfully sold or contracted to sell, generating approximately $1.33 billion of gross sales proceeds. The sales to date, including the assumed sale of Topaz Hotel, reflect a very favorable 15.6x EBITDA multiple and a 5.5% net operating income capitalization rate (after an assumed annual capital reserve of 4% of total hotel revenues) based on the operating performance for 2018 of the properties sold.